Steve Martin wrote an interesting four-part harmony "hymn" with lyrics about the great music sung by various Christian denominations – contrasting the fact that "atheists don't have no songs to call their own." If anything, the song pokes fun of atheists - a rare thing. The bluegrass band Martin tours with, The Steep Canyon Rangers, sang the song on Letterman and at concerts. They also perform Martin's classic song "King Tut." Last year they performed at the US Capitol in the Fourth of July concert. 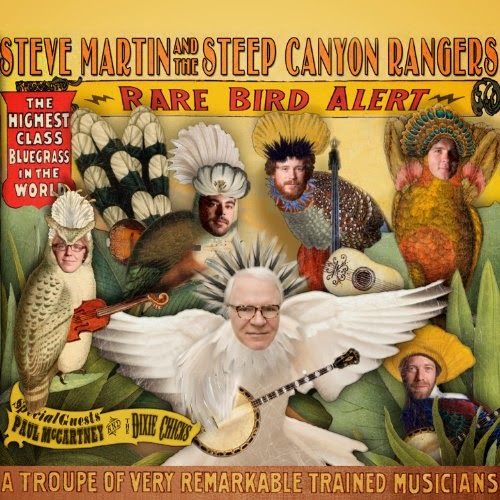 There is talk of filming a third "Father of the Bride" movie. The first two movies were relatively family-oriented films (though portraying the father as a bumbling buffoon, as Hollywood so often does. But the filmmakers are going out of their way to offend traditional families with the third edition. In the story the father of the bride's grandson has grown up, come out as gay, with plans to marry a Navy Seal. Perhaps this is why Steve Martin said he was interested to read that he was starring in the film, considering he hadn't been offered the role or even seen a script. Hopefully he will turn it down.

Blast from the past: a friend reminded me that when the TV show Murphy Brown came out there was such a fuss because it was the first show where a single woman had a baby. Now such a show is commonplace.

Tuesday was the only day this week Will could spend time with MC. Anna is out of town celebrating a birthday. Matthew had a youth group event in Buckhead – a corn hole tournament. Ceil took him, and ran errands (Lenox, etc). I almost ran out of gas, but made it to a station. Also tried out the new Taco Bell quesadilla / burrito combination. It was ok – but a little on the spicy side. Doubt I'll order it again.

Did I tell you that the CRV got hit? Didn't realize I parked on a side street – at the end of someone's driveway. A girl backed out and hit the driver's side door. Her insurance (Geico) was very efficient in getting it fixed. Ceil took it up to Classic Collision in Alpharetta, and was able to drive a Camry while it was repaired. He dropped it off last Monday and they finished late Wednesday. They even detailed the CRV inside and out.

My knock on wood: The Civic check engine light was on, but since getting the oil changed and transmission serviced the light has stayed off for a few weeks. I need to get the emissions tested now. I'll be needing at least 2 tires for the Civic soon. They're not rear bad, but they have a lot of miles on them. Now I've got to keep track of maintenance for Will's Jeep and my father-in-law's Jeep that Anna drives. Saturday Anna was driving M somewhere, and ran over her first squirrel. M took a picture of her crying.

Guess you didn't take advantage of that $24 off at Express Oil Change, did you? Bet the line was long.