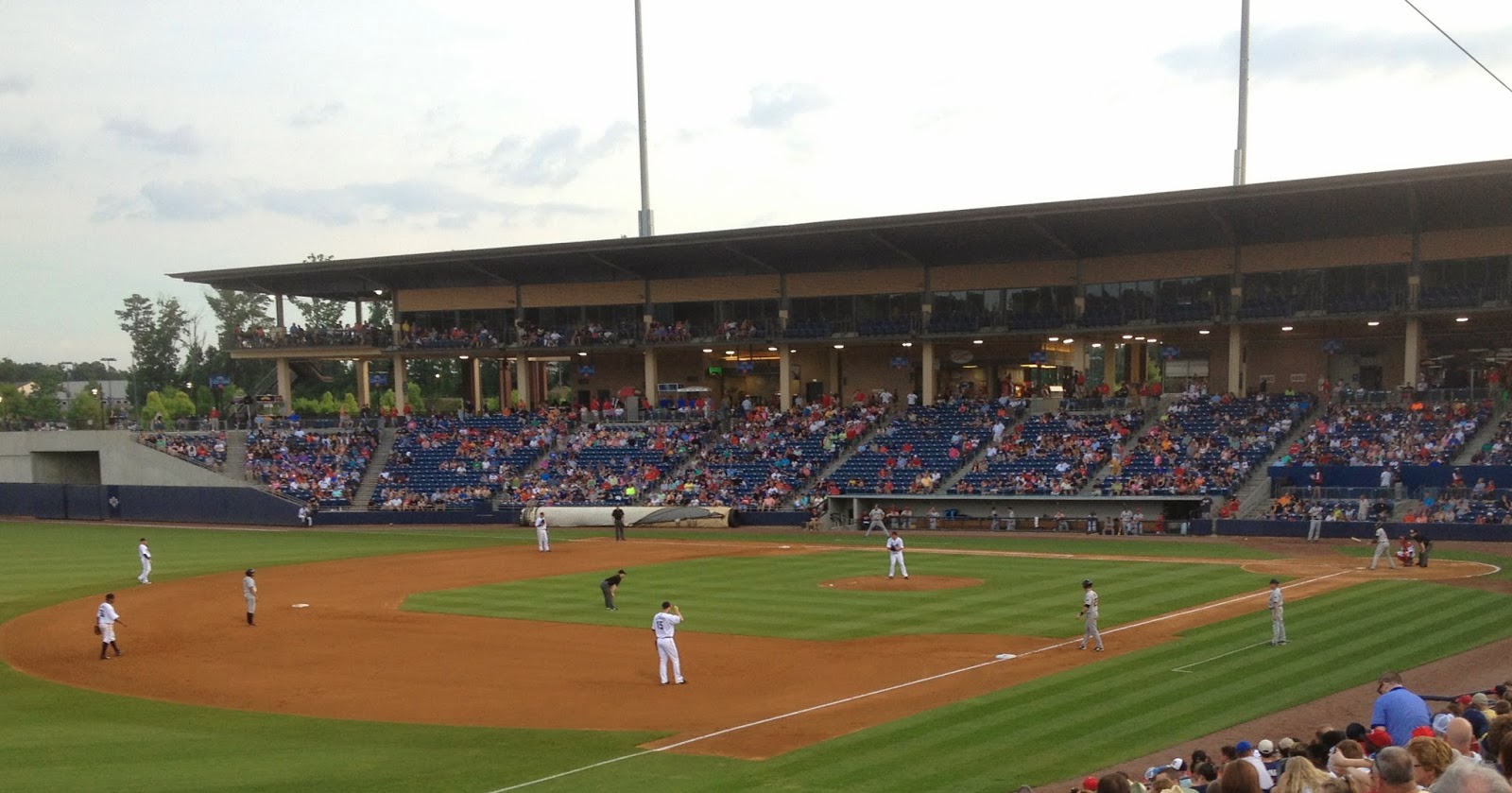 I was able to sneak over to Saturday night’s Gwinnett Braves game after all. The heat wasn’t too bad, and after the gates opened I busied myself with the various activities in the shade. Then I found my seat and spent the rest of the evening punching all-star ballots while watching the game, jumbotron, and people around me. Pastornicky was batting .333, but Constanza, Terdo, and Cunningham weren’t faring as well. Wonder if Snitker plays them in different positions every night to get them ready for the bigs. He should. LaStella’s photo was on the cover of the free program.

My favorite usher from last year was nowhere to be seen, though I did chat with the longtime gatekeeper. Seated in front of me was a typical Gwinnett mom, who detailed her busy travel ball schedule to whoever would listen. She kept yacking the entire game, only stopping long enough the dole out more concession stand money to her young daughters. Then the mom would complain about them spending five bucks for a cup of ice.

Behind me an Indian dad explained detailed intricacies of the game to his very young sons. They listened for the first inning or two, but finally wandered off to play. Behind them sat a pastor (it said so on his polo shirt) and a few other members of his flock. Sunday morning I think I saw him on TV. Also saw cool pop Norman Warrick, a Turner Field regular. Below Terdo throws past a stretching Pastornicky. 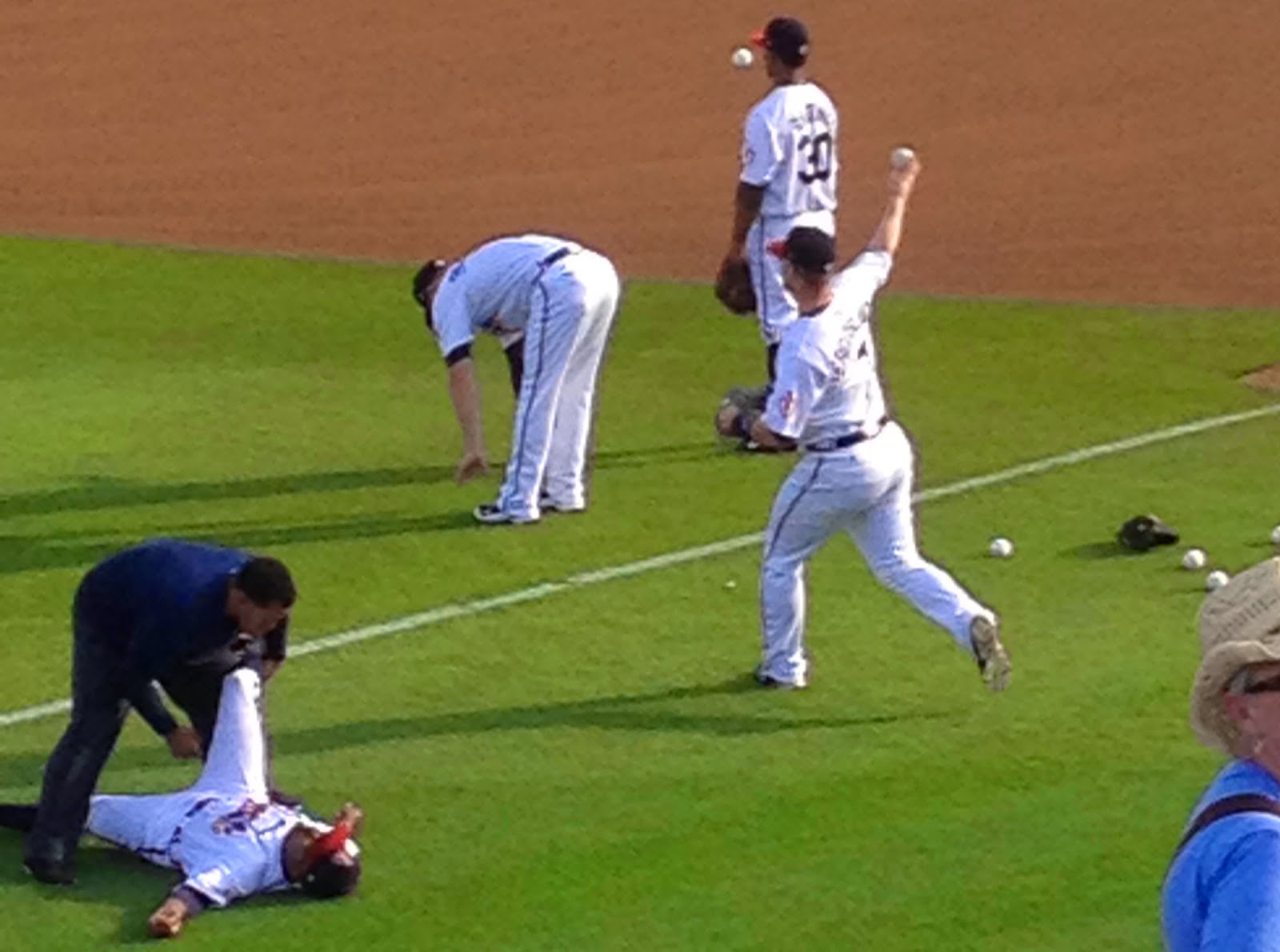 The first place Rochester Red Wings featured ex-major leaguer Wilkin Ramirez. The GBraves rallied in the bottom of the eighth, but came up a run short. At that point I left for home, since construction beyond the right field fence detoured the road out of the stadium. Driving down I-85 South shortly after 10 pm I was able to see the Stone Mountain fireworks show off in the distance.

Arrived home at 10:50 pm – to an empty house. Will and MC arrived next, then M and C returned from taking Sarah, then finally Anna got home from her Grace Church event (and sushi).

Stopped by Stinky Kroger on the way to the game, to return a RedBox. Saw bagboy Robert (aka The Chief) inside, so I told him of my destination. He waved me off, saying he only went to watch “the big boys.” In preparation for the game I followed the Gwinnett Braves on Twitter. Friday night Van Earl Wright was at the GBraves game, modeling the jersey to be worn and auctioned off Saturday night. Not sure, but Van Earl may be broadcasting the GBraves telecasts.

Added four bobbleheads to the collection the weekend. The MyCokeRewards Kirk Herbstreit bobblehead arrived Saturday. On the way to the Saturday night Gwinnett Braves Mike Minor bobblehead night I had just enough time to zip into the Pleasant Hill Road Goodwill, where I found the 2008 bobblehead of Thrashers goalie Kari Lehtonen for only a dollar. On the way home from work Friday a store in Roswell had four bobbleheads for six bucks each. I passed on the three small Upper Deck nodders (Donald Trump, Michael Vick, and Edgerren James), but snapped up a John Gruden Tampa Bay Buccaneers bobblehead. Twenty bucks for four bobbleheads AND a Gwinnett Braves game isn’t too bad. Sunday night I bid on a cute Florida Frenzy mascot bobblehead, but lost the auction.

Watched “Saving Mr. Banks” Friday night. Ceil and I liked it, but the increasingly more dogmatic Will didn’t. He also disliked the all too trashy Sunday night Tony Awards as well as the all-new Miss USA Pageant, that went overboard on giving each contestant a tough gal attribute (wrestling, outdoors, etc) as well as a hard-knock “I overcame this hardship” type story.

The 680 crew was talking about the California Chrome owner Monday morning. Said HORSES were cheating. How could a horse cheat? Then it turned out Cal Chrome stepped on his own foot at the start, and was bleeding. Plus Cal Chrome was bred for distance, and probably would’ve lost anyway. The jockey said that after the first quarter he know this wasn’t their day. But the owner went on and on, even using a bad triathlon analogy.

Just finished a book by Fox News correspondent Charles Krauthammer, a compilation of his columns over the years. I was surprised when he gave a tiny bit of credit for the fall of the Soviet Union and the end of the Cold War to the late 70’s policies put in place by the Carter Administration.

Can the Spurs win three of the next five games? Or did winning Game One awaken the sleeping giant?