Was fortunate enough to be asked to tonight's Falcons / Jaguars preseason game, the second at brand new Mercedes-Benz Stadium.

Look close at the Georgia Dome above. That's a huge crane on the roof. We arrived five minutes before the gates opened. 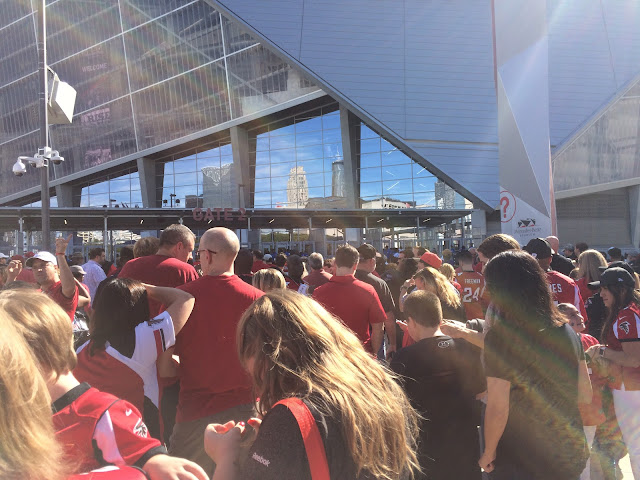 The device below is the electronic ticket scanner,
which takes the place of the traditional ticket taker employee.
Behind it looms the huge metal falcon statue. 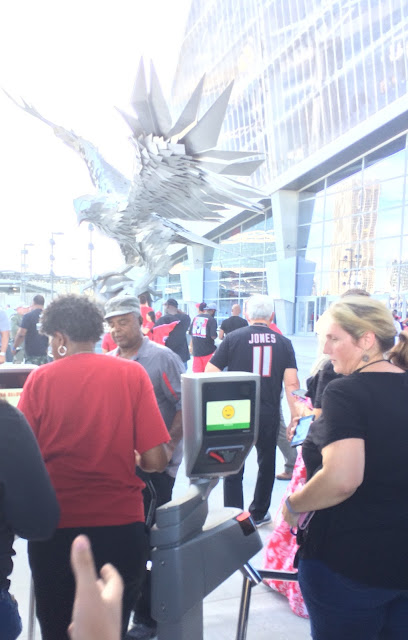 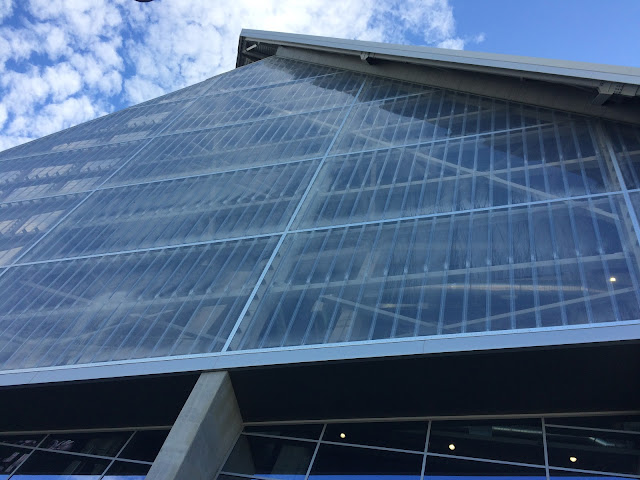 Just inside is the open east end, a large gathering spot for fans. 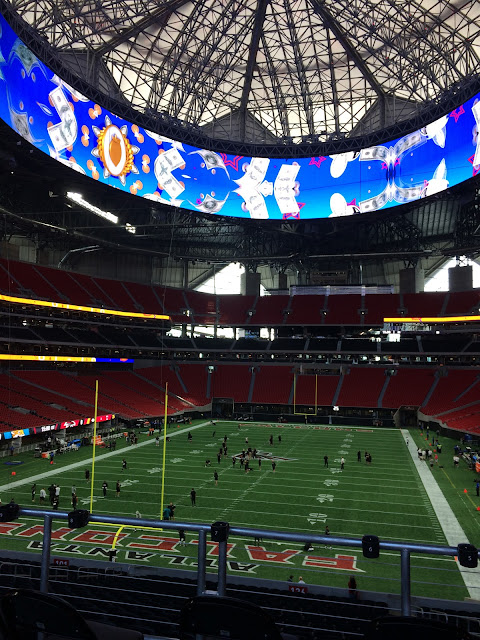 The east end of the south stands. So much to look at. 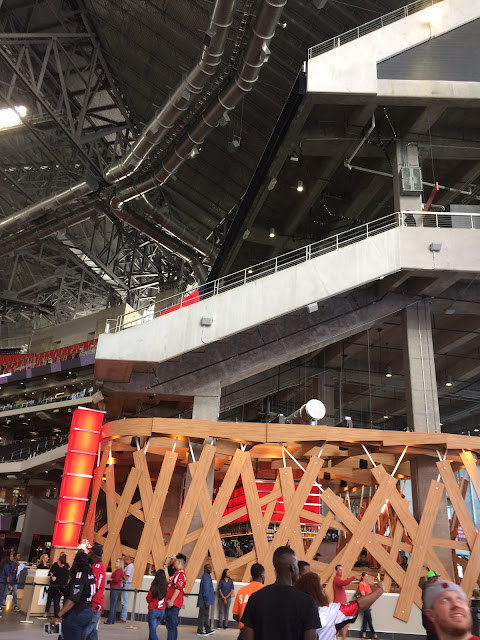 Looking out the east end,
past the falcon at Phillips Arena and downtown Atlanta. 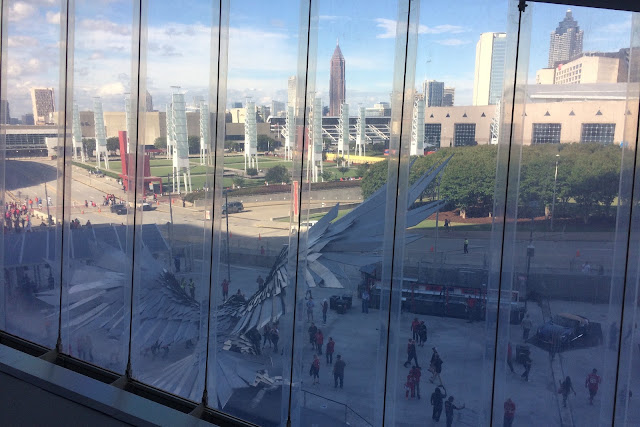 Broke a personal rule and allowed my photo to be taken.
Accidentally wore sneakers in Jaguar team colors. 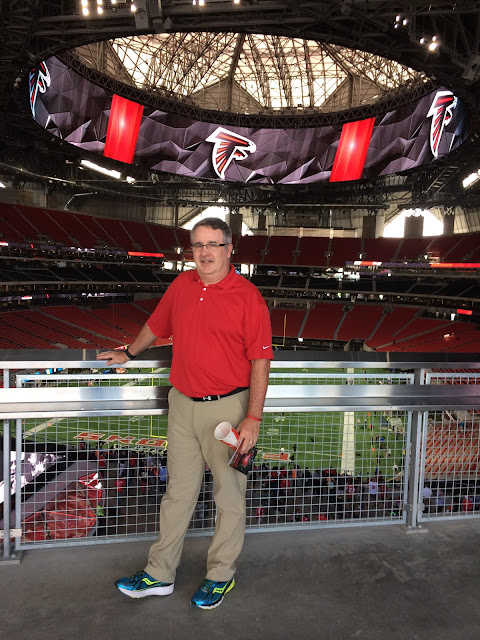 Windows offered views in all directions,
including north to Kennesaw Mountain. 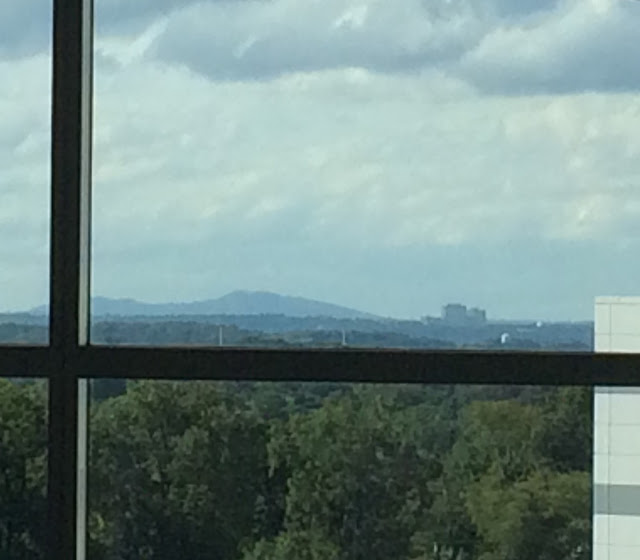 Looking east from the west end zone. Good view of the bridges connecting the second and third decks: excellent viewing areas all.
The stands in the east end zone are interestingly shaped. 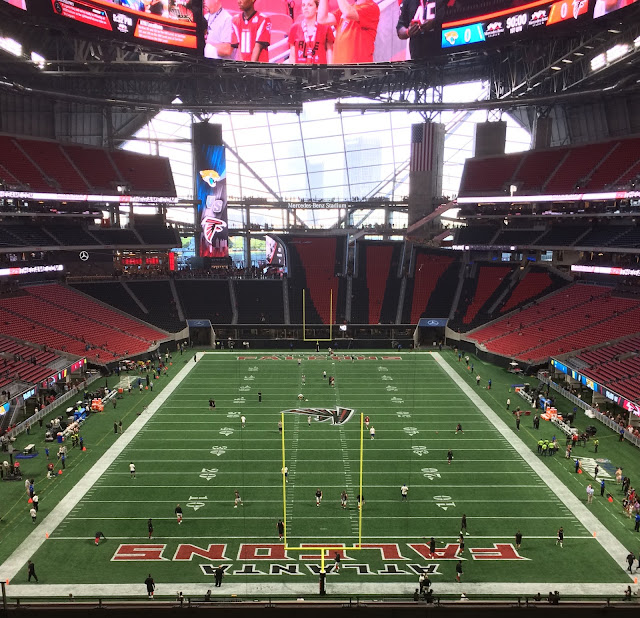 The other sports radio station was broadcasting on the second level. 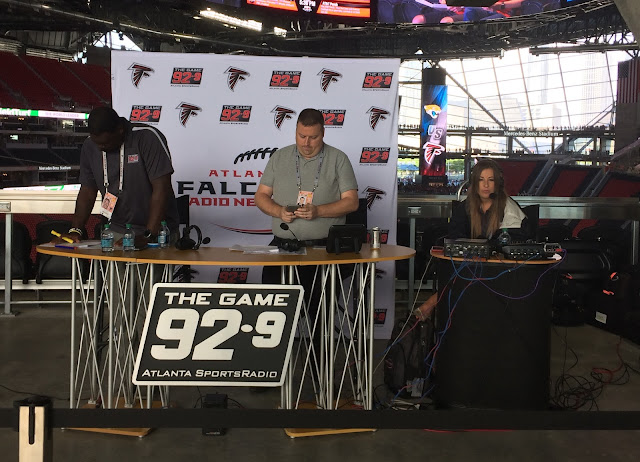 Dude was wearing a cape. 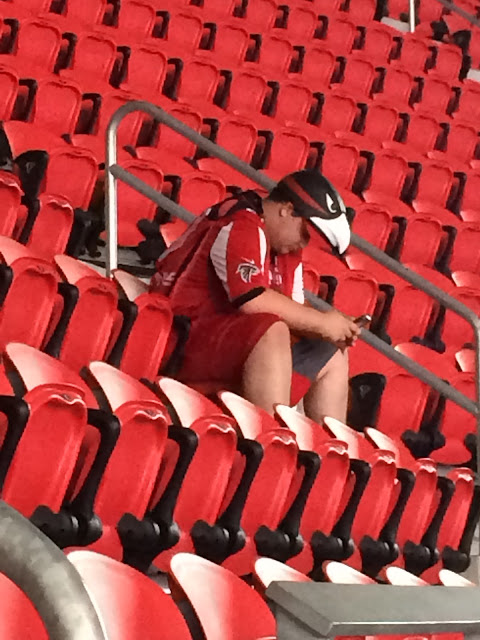 When I first saw pictures of the inside,
I thought the upper deck could've been larger.
After climbing the steps to the third from the top row, I'm glad I didn't.

In addition to the exclusive Hundred Yard Bar, us regular fans in the upper level have one hundred yards of concessions. 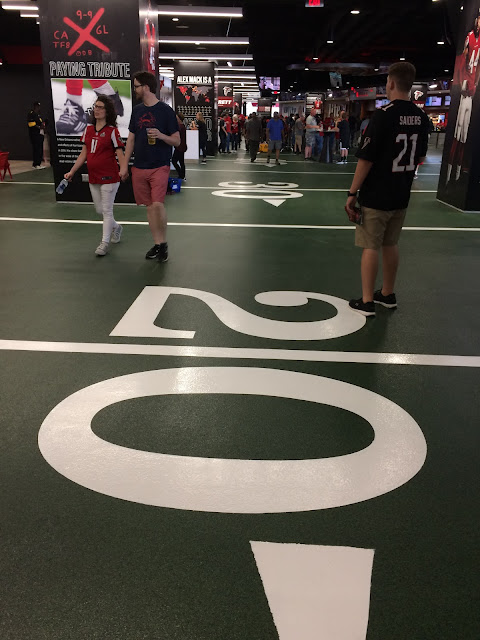 Took me awhile to figure out where the rows were numbered:
behind the step. 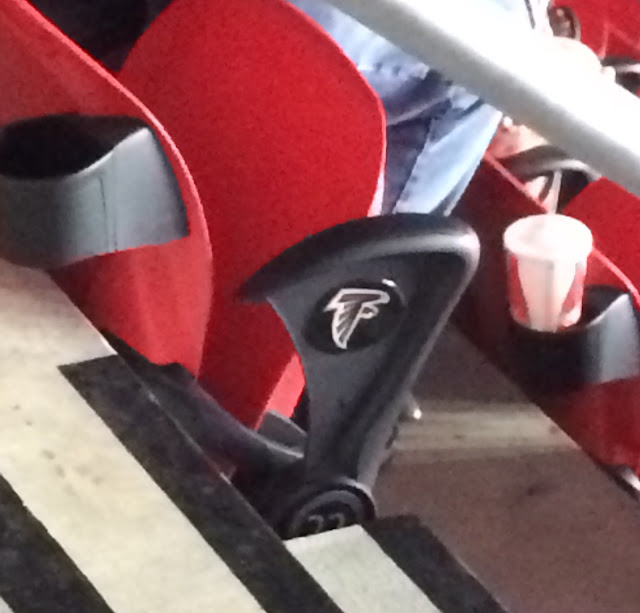 The Falcons take the field.
Note the field level luxury suites behind the Jags bench.
Note the Jags lined up for the national anthem.
I checked both benches and could not locate one protester. 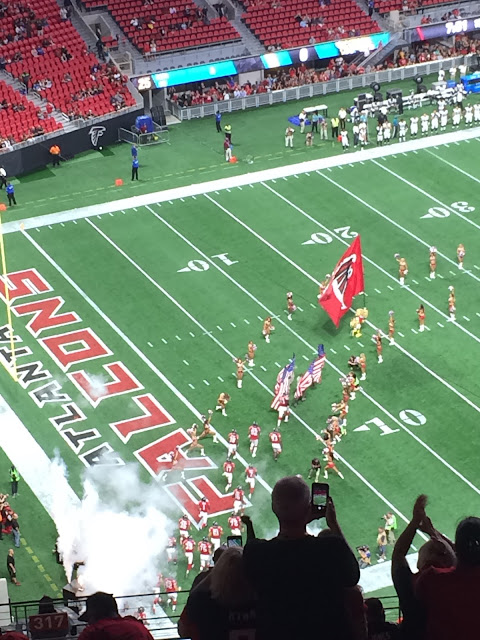 The rook was supported by these huge concrete pillars. 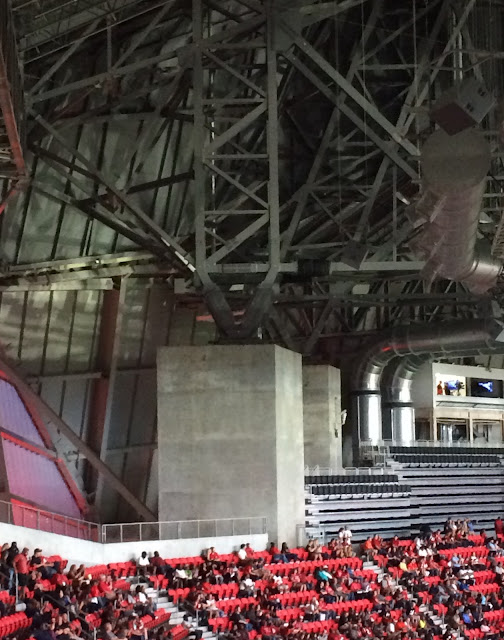 The falcon statue at night, surrounded by fans taking pictures. 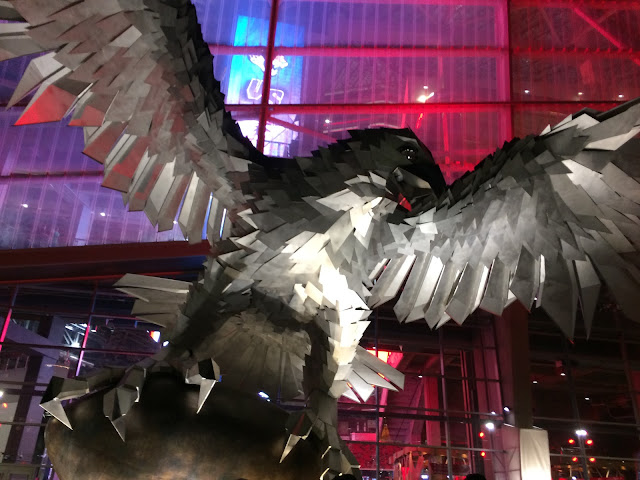 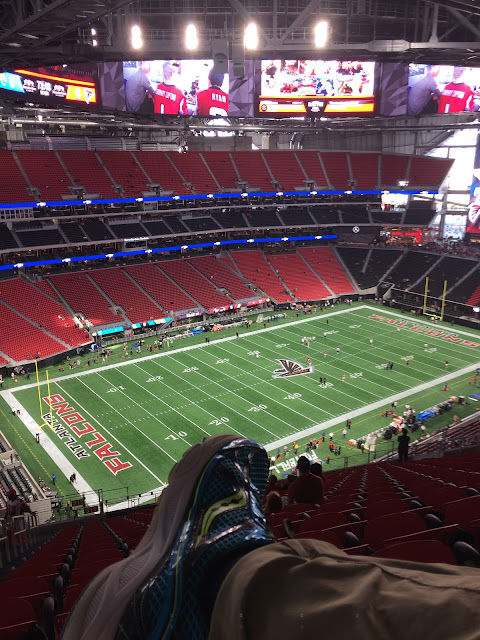 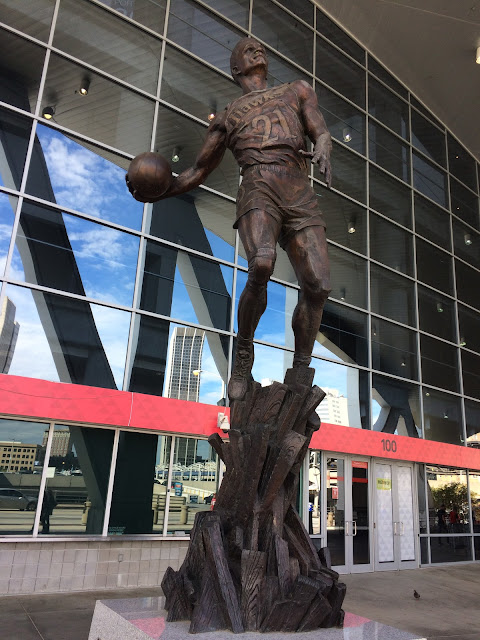