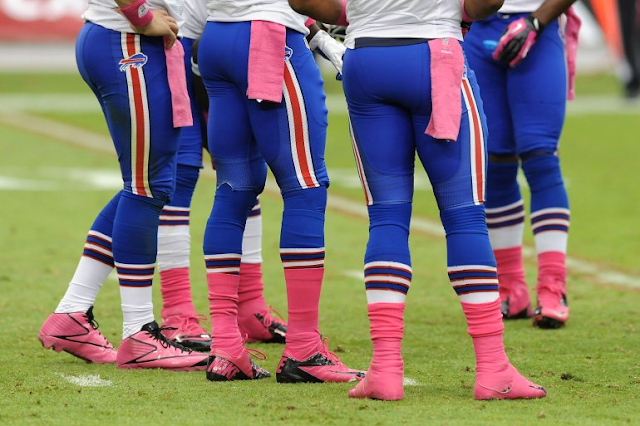 Every October all NFL teams wear pink to promote breast cancer awareness. Pink shoes. Pink towels. Pink sweatbands. Pink socks. Pink chinstraps. Pink gloves. Pink mouthpieces. I am all for breast cancer awareness, but these days players on all levels (all the way down to pee wee) deck themselves out in pink. 99% are just showing out. They could care less about breast cancer. If they cared that much about it, you’d think their cars and houses and the clothes they wore home after the game would all be festooned in pink as well. But they aren’t. 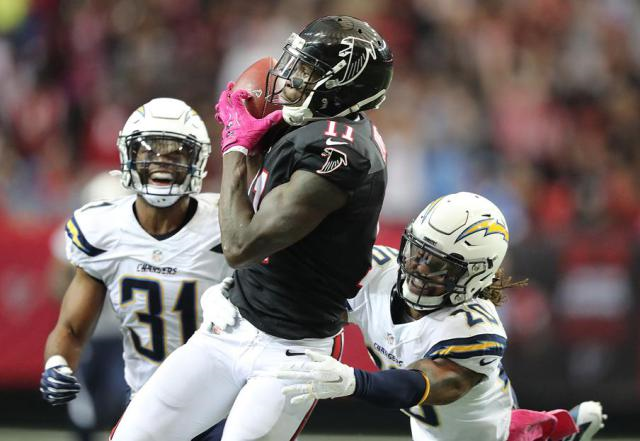 But not this year. No Pinktober. Thank goodness, I say. No way the NFL should devote a full one quarter of its regular season to wearing non-standard uniforms, especially as rigid as they are about adhering to standardized uniforms. Which is another good thing in my book. NBA players dress alike. MLB players wear the same thing. Everyone on Wall Street wears the same uniform. No reason it shouldn’t be the same way in a billion dollar industry like football. Tom Brady (below, #12) is a man who doesn't bow to the whims of fashion. 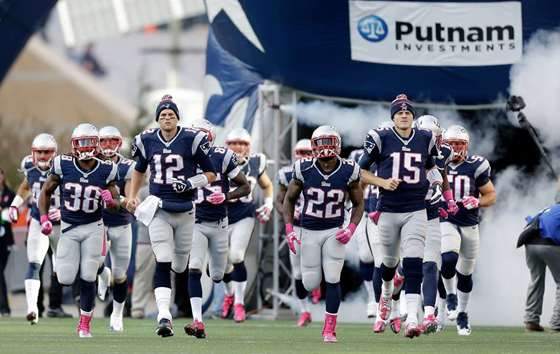 Suggestion: wear special pink uniforms in a preseason game. Perhaps the first Hall of Fame game. Might draw more interest to an otherwise unwatched game. Or in the Pro Bowl the AFC can wear pink for breast cancer and the NFC can wear light blue for prostate cancer. Or the cheerleaders can still wear pink during October. Nobody notices them anyway.
What do you think about NFL players not standing during the national anthem? And what do you think about Cowboys owner Jerry Jones saying all his employees and players will stand for the anthem – or else be sent packing? I agree. The players are at work, being paid millions to represent an organization and an industry. If I were to blatantly misrepresent my company, I’d certainly be shown the door. And I’m in a far less public arena.
Owners have businesses to run and ticket buyers to please. And CK’s style of play doesn’t fit with most NFL offenses. Tim Tebow is no longer in the NFL – for the same reason. Doesn’t help that the guy’s girlfriend is an “activist.” Michael Vick said the guy needed to get a haircut. Early in his career Vick had his hair in braids, but after he got out of jail he kept his hair neatly trimmed, worked hard, and didn’t mouth off. He knew he’d blown a golden opportunity, and worked hard to stay in the league. I hear he just got a job in television. Good for him.


Just a few years ago, after Pat Tillman died, players were fighting for the privilege to carry the American flag when the team ran out on the field before the game started. There would be a huge flag stretched out across the field, and the crowd would hold up cards spelling out USA as jet fighters flew overhead. How times have changed.
Last weekend I thought about cooking an eggy-boy: fried egg, cheese, English muffin. There was other stuff to eat. While M was home alone this weekend he made up a batch of chocolate chip cookies.
Saturday night at the Gwinnett Braves game I met David Edwards’ mother, who once attended an Atlanta Crackers game at Ponce de Leon Park. She was seating in seat number 13 – and was struck in the face by a foul ball. There at CoolRay Field she was seated down the right field line, in the path of potential line drives. She was once again sitting in seat 13. I pointed down to my friends Johnny and Hugh, who’d also gone to Crackers games.
Spinning my wheels. Doesn’t seem like I am getting much done. Worked until almost 7 pm Monday night. Left work and went looking for something to wear to the Falcons game. Bought a pair of shoes in Duluth. Drove south on Peachtree Industrial thinking I would get gas, then decided to wait. Took Holcomb Bridge through Roswell and stopped at the BP across from the QT and Slopes BBQ place. Couldn’t find my credit card. Couldn’t find the phone number for the store I had just left. Internet said the store was closed. I was worried that I had dropped the credit card in the parking lot, so I drove all the way back. Store was still open so I went in. The lady saw me and breathed a sigh of relief, and handed me my credit card. Didn’t get home until 9:30.
Then I stayed up past midnight packaging four eBay shipments, so I could mail them this morning. Left home just a little bit earlier. Stopped at the post office. There was a lady outside with a broom, but all she was doing was talking on her cell phone. Not getting much work done. I carried the four boxes inside – and the machine wasn’t worked. Loaded them back in my car.
The next post office is in a high traffic area near Norcross High. Pulled up, unloaded the boxes, went inside – and that machine was broken as well. There was a lady with a broom at this post office as well. She asked my how my day was going. I wasn’t honest. So I was later to work than I wanted to be. Then instead of working on something that was two weeks old I had to get ready for a conference call.
Worked until seven Tuesday night. Am I over the hump? Hopefully it won’t be so late this afternoon.
Stopped at the post office to mail the four boxes, plus at one thrift store looking for Falcons gear. Didn’t get home until eight. C had fallen asleep, and had a headache. He fixing chicken and dumplings. Good. Didn’t finish eating until nine. Nothing much on TV. Didn’t feel like boxing up more eBay, so I’ll need to tonight.
The great thing about the movie Groundhog Day is being able to repeat the same day over and over again. Bill Murray is able to work to live a perfect day. He takes piano lessons, nurses a homeless man back to health, changes an old lay’s flat tire, catches a kid falling out of a tree, gets to know everyone in town, saves a man from choking to death, and learns to sculpt ice. He also has some fun. I could be comfortable doing those things.
A recent issue of the Atlanta Business Chronicle had pictures of Blake McBurney, Bob Voyles, and David Allman. I taught Allman’s son in ECS. The Mercedes-Benz Stadium was Allman’s project. Guess I fell in with the wrong crowd at SPdL.

Speaking of plaques I may have mentioned how I had doctored a plaque on the wall here in our office. Lots of people walk right past the plaque every day but pay it no mind. It was for sales group of the year, with a new group to be added every year. After 3 or 4 years it was forgotten about, or a new regime came in and didn’t keep it up. They’ve been sitting there unnoticed for several years, so I printed out paper additions with my group as the winner every year. Did this over a month ago but no one has noticed. I finally gave a hint to the two girls who work with me, and they figured it out. But no one else knows.


Working on my pre-season football predictions for GT, UGA, and Clemson. How do you think they’ll do?