Where Everybody Knows Your Name

Lucas Sims seems to be doing well. Pitching quickly helps. Much better than taking a lot of time between pitches. 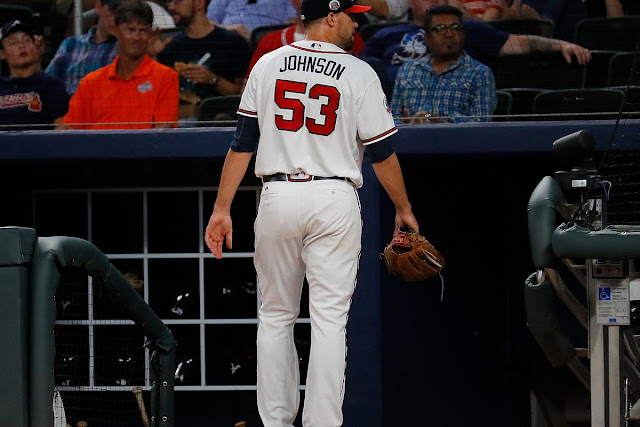 Saw Jim Johnson blow the 8th inning, then lash back at an applauding fan just before the commercial came on. Can’t blame Snitker for rolling him out there – that’s the only way to get his mojo back. Johnson didn’t pitch the night before, his Sims’ shutout, but this deep in the season it’s hard to trot out the best three relievers every night. But after Johnson’s blowup last night you wonder if he won’t get several days off, perhaps demoting to long relief.

Barney got a haircut Thursday. Then Ceil drove to SC for her family reunion. Will is going up there Saturday for the golf tourney. I’m going to the Braves game Friday night, the Gwinnett game Saturday night, then straight to Macon for Sunday’s reunion at Northside Christian Church.


While I don’t know every single person in our building by name, I pretty much know all the faces. There are six computer people who work on the first floor. Four know me well, and I recognize the other two.
On my second floor the office is in the shape of a big U. Transactional sales is on one side. There are three new guys I’m getting to know, plus ten I know well (note including the five outside guys). I’m in the base of the U with twelve other people I work with every day. Purchasing is behind me in the other leg of the U – fourteen people. I know most pretty well…maybe one or two might not know my name. There are seven others on my floor, and I know six of them well.

There are three departments upstairs. Human Resources probably knows me better than I know them (five people). Three of the five Marketing people know me. There’s been a lot of turnover in my old Program Group, but twelve of the 13 know me.

Now they’re renovating the restrooms on my floor, meaning I have to walk to the hallway, down the hall, either up or down the stairs, and around the corner to the restroom. Or though the office to the other hall to the other stairwell. I just completed a study to see which of the four routes was closest. They’re all about the same, between 68 and 75 steps.


Tuesday: worked until 6:20. Grilled chicken and Mexican fixings. I made a quesadilla on the panini press.

Wednesday started out as a sit down day for me. While I was getting dressed I started sneezing over and over, which wears me out. The last two nights I was sleeping hard past the time I needed to get up. The rest of Wednesday was better for me. Stood up half the morning and all afternoon. Worked past six. Talked Ceil into having leftovers. She had spaghetti and I made a quesadilla on the panini press. Nothing much on the telly.