Who is the Racist?

The violent white supremacist protests this weekend in Charlottesville were wrong. I know far too little about these issues to make an intelligent comment beyond that. One of the few columns I read about the protests did seem to make sense.
In the meantime, my own blog has received its first comment claiming racism. Might as well make a blog post out of it. 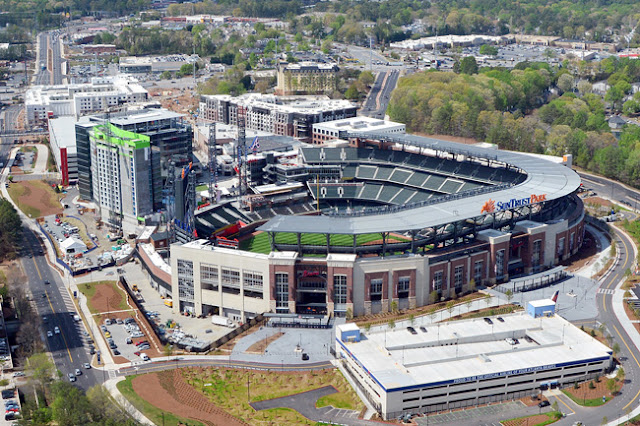 In late March I posted pictures from the SunTrust Park open house. Thanks to a link posted on Uni Watch, the post became one of the most widely read ever on my blog. Then months later, this comment:
"Racism is the only reason downtown Atlanta couldn't have seen similar redevelopment, capitalism and this level of fun. How many decades did that area languish because racists refused to spend their money to build, develop, and surround Turner Field similarly. Great photos to reflect the truth."
The comment was written by "FBlogs." I checked his profile, which didn't have much on it. The problem with BlogSpot is that in order to comment you must first register. Most times it's not worth the trouble. Surely this is the reason I don't get many comments.
Everyone is entitled to their opinion, including Mr. FBlogs. There is some truth to his statement. The area around Turner Field did languish for the twenty years the Braves called it home, as well as the thirty years they inhabited Atlanta Stadium. I will try to not call any person or group racist. But thankful for any comment, I was quick to reply:
"I agree. The Braves repeated attempts to develop the community around Turner Field during their 20 year stay were consistently turned down by their landlord - the city of Atlanta. The Braves offered the city 75% of any revenues generated - a generous deal. But the city refused to give up their beloved parking revenues. From a 2013 article in the AJC: "When pursuing such a development for the parking lots surrounding Turner Field, the Braves proposed an arrangement in which they would receive only 25 percent of the revenue. Those negotiations with the city of Atlanta ended last month."
I'm a sucker for stadium stories. I may not catch all of them, but I sniff out most of them. Atlanta Stadium was in place, along with the surrounding City of Atlanta-owned parking lots, since the mid-1960's. Over the years more old houses were torn down and more parking lots were built to the south, across Georgia Avenue. The city was able to reap parking revenues for the 81 Braves games every year for over fifty years.
When MARTA built rail in the late 1970's, plans for a stadium station were nixed by the city, who didn't want to lose their parking revenues. The closest stations were built over a mile away.
The Atlanta Committee for the Olympic Games built a new stadium, paid to convert the stadium into a baseball facility, and have Atlanta Fulton County Stadium torn down (replaced by more city-owned parking). Lighting at Turner Field was among the worst in baseball.
Compared to other teams, the Braves were at a competitive disadvantage due to lower revenues. Most teams reap parking proceeds, but the Braves did not. As an independent business, the Braves knew success on the field would bring in more money, which in turn could be spent on buying better players to ensure further success.
The team looked for any way possible to increase revenues and attendance. They knew the better the fan experience, the higher attendance would be. They upgraded the food options at the stadium, as well. Several times they drew up plans to place shops and restaurants and parking decks on the barren parking lots, giving the city 75% of the revenue – but the city balked. They proposed development even after a multimillion dollar putt putt complex failed miserably. To say "racists refused to spend their money to build, develop, and surround Turner Field similarly" is incorrect / ignorant / uninformed, and / or pointing fingers in the wrong direction.
The rest is history. The city got in bed with both the Falcons (nine games in a 1.5 billion dollar oft-delayed stadium whose roof doesn't work) and the Hawks (40 games in an 18 year old arena undergoing a massive overhaul) but not the Braves, a perennial playoff contender playing 82 games. The Braves were coming up on the end of their lease, faced with the business decision of whether to sign a new lease on a stadium in need of millions of dollars in infrastructure repairs. With their attention locked in on the Falcons and Hawks, the city was slow to negotiate with the Braves.
Knowing the need for increased revenue streams in order to field a competitive team, the Braves looked at all options available. Race had nothing to do with it. While the Hawks fan base was centered inside the perimeter, studies showed the Braves large multi-state fan base is centered in Cobb County. After the Braves announced their plans to build in Cobb, the mud began flying. The city raced to cover its tracks. The liberal AJC, who themselves had left downtown for the suburbs, blasted the Braves again and again without fairly reporting the team's side of the story. Other less biased media outlets reported the true facts, including The Atlanta Business Chronicle and the Saporta Report.
Contrary to public opinion, the Braves themselves made all the decisions related to the move. Parent company Liberty Media gave them the go-ahead and stayed out of the way. I may be naïve, but huge multi-billion dollar businesses have too much at stake to make decisions based on racism and hate. Indeed, if the Braves had their way, the development around SunTrust park COULD have happened around Turner Field.
You'd like to think the government of a large metropolitan city would place the best interests of its citizens ahead of race, special interests, and lining their own pockets, but that isn't the age we live in.