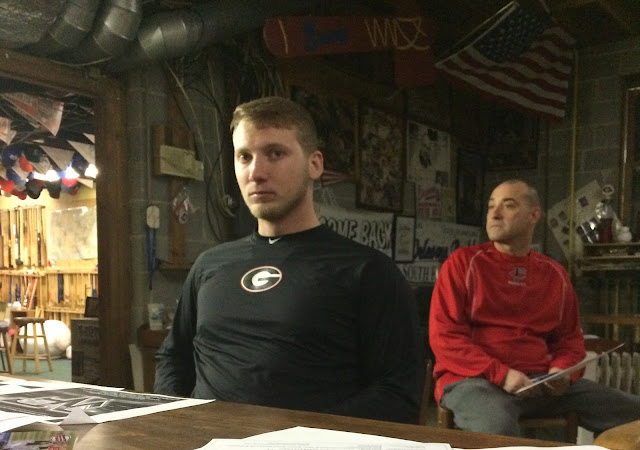 Andrew spoke first, detailing his baseball journey starting in Mashburn Middle School, where he’d been taught by one of the men there at our meeting. His next door neighbor was former Brave Matt Lipka. At FCHS Gist was sent to the outfield until the coaches realized he was a pitcher. During summers he played East Cobb Baseball and pitched for a team in upstate South Carolina. One unpleasant memory was leaving after his high school graduation and making the long drive to Fort Myers for a tournament, missing all the after parties at the fairgrounds. Then when he only pitched in one game, making the long drive home even longer.

The lefty turned down several partial scholarship offers to pitch at Walters State Junior College, located north of Nashville. Gist loved it there, and again worked his way up to more innings pitched. His roommate Brent Honeywell just made the Rays 40 man roster. As a sophomore WSJC finished one game away from the championship game. 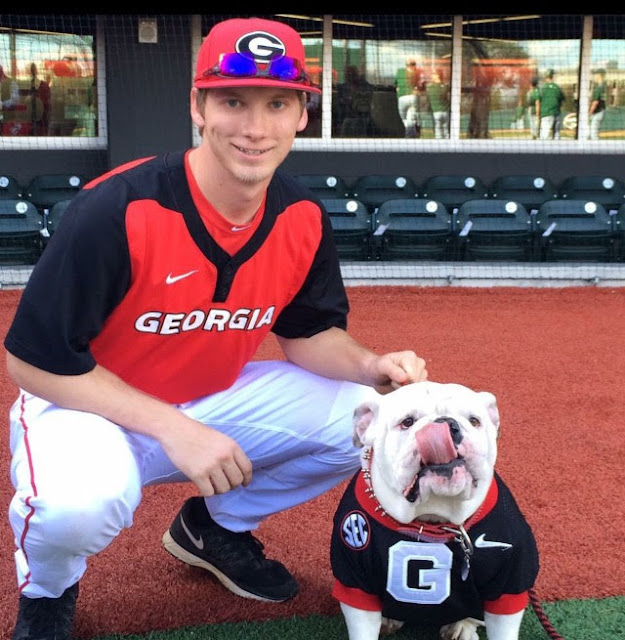 Gist made a visit to Louisville, but UGA had recruited him harder, so it was an easy choice. He was happy with his workload (about 40 innings, first in relief, then making weekday starts). His first SEC appearance came at the rowdy LSU stadium. At Mississippi State players could trade baseballs for hot dogs or brats. Michael Curry, his first catcher at UGA, suddenly developed an aversion to throwing the ball back to the pitcher. 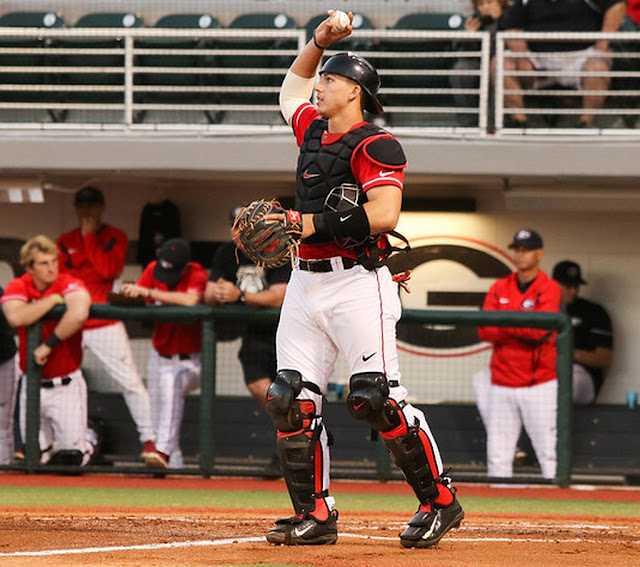 As a senior Gist started the higher profile Friday night games. He was scouted by Milt Hill (a friend of the Hot Stove), who lives in Windermere. As the draft approached Andrew signed with an agent, who told him he’d be drafted during the second day of the draft. But on the first day the Orioles called, asking if he’d sign for $2500.00. Gist said yes and called his agent, who said no. He was eventually drafted by the Rays in the ninth round, much better than he’d expected.

After just a couple of days in Florida Gist was assigned to the Class A Hudson Valley Renegades in the short season New York Penn League. Without a car, Gist lived with two other players with a host family across the street from Dutchess Stadium. One of his roommates was bonus baby Brenden McKay, who many say had the most illustrious career in college baseball history. In 2017 McKay hit .341 with 18 HR & 57 RBI – and went 11-3 with a 2.56 era on the mound. Andrew described McKay as humble and smart (before signing McKay established residency in Florida to lower his tax hit). Gist played golf with McKay but didn’t hit him up for swag from his Nike contract.

This fall Andrew worked out in Athens while taking a class (he’s five classes away from graduating). He’s reporting to the Rays Velocity Camp in an effort to increase the speed on his fastball. His agent likes Gist’s chances in spring training – the Rays are rebuilding and are so desperate for lefthanded relievers that they signed former Brave Jonny Venters, who’s had three Tommy John surgeries and spend the 2017 season in AAA. Venters lives just around the corner on Canton Highway.

Bull grew up in Holly Hill SC, playing three sports in high school. He pitched for two seasons at Newberry College before transferring to Clemson to get his engineering degree. He works at a software firm and helps coach at FCHS. He was one of the last to leave, talking to with me about playing more than one sport and various Clemson bowl trips.

After the meeting Gist was starting his ten hour drive to Florida, driving several hours to break the long trip in two. Still he stuck around to talk to everyone. When he arrived he took out several photos of himself and autographed them, and there was plenty for everyone.

The Hot Stove gang:
Johnny Tallant born 12.20.1949. He taught musician Zack Brown, and is past president of the Braves 400 Club. He recently spoke to the Georgia State head baseball coach, who invited the Hot Stove to meet one Sunday afternoon in the Braves old clubhouse in Turner Field.
Hugh was born October 1940
Jerry Anderson lists all the transactions
Jerry’s son Jeremy teaches music at Mashburn Middle School, and usually brings his young son to the meetings.
Big Tom drove a school bus for a few years after retiring.
Brian walks with a cane.
James always smiles, travels with Johnny
LJ Avery was a first time attender.