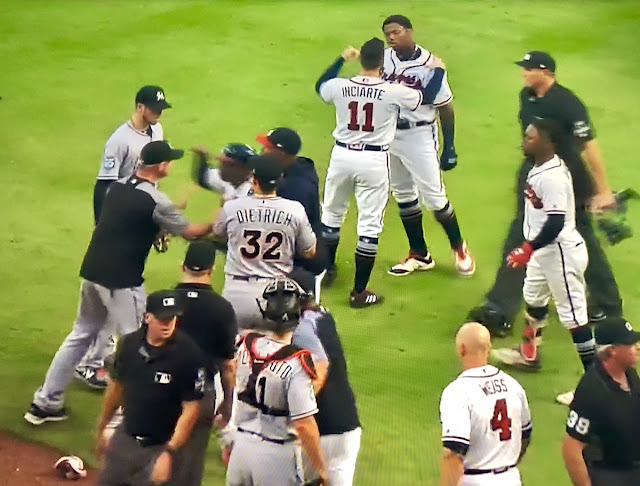 BREAKING: Ronald Acuna was hit in the elbow by the first pitch thrown in the bottom of the first inning, and had to leave the game. Since it was not an official at bat, his record home run streak can continue - if he is able to return to the lineup anytime soon. Now back to my regular post:
In the world today one of the top buzzwords is diversity. Diversity is a good thing, they say. Always one to jump on the latest trend, Georgia Tech is all about the diversity. Inclusion. All races. All nations. All religions living in harmony. All sexual orientations.
Maybe this is why when I go to the grocery store or open my refrigerator all I can find is not plain old orange juice but instead all combinations of juices: orange pineapple mango. Mango is in everything. Strawberry kiwi lemonade. Whatever happened to plain old lemonade? (Truth be told, I do like me some flavored lemonade). I say all these new age concoctions are the direct result of all this inclusion / diversity / one world order thinking bankrolled by George Soros, he who comes before the antichrist.
Reminds me that during his sermon this past Sunday entitled “Objections to Christianity” Bryant brought up the DIVERSITY bumper sticker seen so proliferantly these days. Wright’s point wasn’t that the mission of some of those religions is the destruction of all other religions (though that’s true), but that in today’s world of diversity and inclusivity, over half of Christians in America agree that it is possible for followers of other religions can have eternal life in heaven. As Bryant said, to believe such is to call Jesus a liar. As Jesus said in John 14:6 ”I am the Way and the Truth and the Life. No one comes to the Father except through Me.” You can’t have it both ways.
One more game against the Marlins. Hopefully Acuna can keep it up against the Rockies this weekend. Soto still gets voted rookie of the year.
Tech players continue to rave about how much better the new adidas uniforms are than the old Russell Athletic unis. They say the old Russell jerseys and pants would actually hinder their movement. So Tech players were actually at a disadvantage to their opponents. In this day and age, that’s ridiculous. Shame on Russell Athletics. Shame on Georgia Tech.
https://www.myajc.com/sports/college/parker-braun-does-not-miss-russell-athletic-gear-all/Pd9PnJQl2dggMxgUql52oN/
After all these years Tom Brady is finally wearing a new helmet. His old helmet had been banned, but Brady was grandfathered in. In this case grandfathered might not be the best term to use. 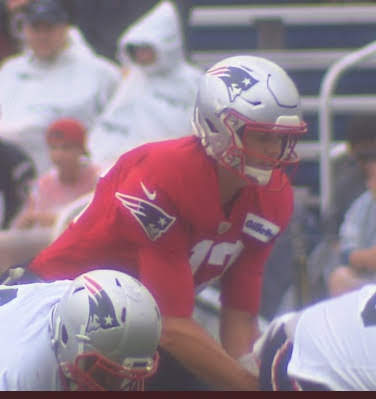 Joe Simpson is a former Dodger, back in the days of Tommy Lasorda. Back then anyone who played for the Dodgers wore the uniform with pride, and was taught the right way to wear it. In fact MLB used to have rules about anyone being on the field had to be in uniform. Rules about managers having to wear a jersey, not just a warmup. Now they want to sell hoodies and BP jerseys and T shirts and BP caps and crazy socks, so its ok to wear all that on the field. Whatever happened to stirrups?
Same with the anthem. We’ve had no football for the past six months. Was anyone out there protesting during their down time? If they had it would’ve made the news. Now when you turn on a game there’s more talk about protests than actual football. Forget that.
Similar to work. If I start protesting instead of doing my job, they would fire me. People don’t realize we’re hired to make money here. Meetings about safety and the police are good and informative, but in the end the job has to get done. Years ago they wanted my old boss Steve Apollo to attend weeks and weeks of meetings. If he had gone the office would’ve fallen apart. He sent me instead, and got people to cover my work. Things kept running, and I became a more valuable employee as a result. To this day I am using knowledge from those meetings to help coworkers all over the Southeast.
Last Thursday Barney was groomed and seemed tired but happy last night. Didn’t lick or chew or bark much – too tired. I worked past 6:30. Drove straight home. Ceil cooked a chicken and rice dish. Also kale (bleh) and lentles. First time to crash on the couch since last week. Watched a Hallmark movie until just before it ended, and another episode of The Marvelous Mrs. Maisel. I like it (she’s a fledgling comedienne) but it’s a little too blue for Ceil. She likes the 50’s era costumes. M made it back from his whirlwind trip to Tybee Island late Thursday night (actually early Friday morning). In time to get some sleep before his shift at work today.
Monday: Ceil and M ate at the Howell Mill Taqueria after Ceil ordered glasses at Warby Parker.
I left work at six. Earlier this year I had entered a contest to win a pickup from Hooters. I didn’t win but of course now I’m on their email list. For my birthday they sent a coupon for ten boneless wings, so I decided to try it out. They were smothered in BBQ sauce, and were delicious, particularly early on when they were hot. I caved and ordered curly fries as well, and they brought me a huge bowlful. Usually I eat fries first, while they are hot. I did start out eating one boneless wing, then dug in to the fries. After a while I started alternating between eating a wing and more fries, but the wings weren’t quite as good after they’d cooled. Should’ve concentrated on the wings first, mixing in a few fries as I progressed.
While I ate I perused the menu. Bar food, but the pictures of the food all looked good. On Mondays wings are all you can eat for $14.00. For that to work I would half to skip the fries. On Wednesday wings and fries are all you can eat for $15.00. The fries were good.
When I went, I thought about parking my car where it couldn’t be seen. Luckily there are hundreds of silver Civics in the city. The place wasn’t crowded, but not dead either. Lots of TV’s showing sports. Zero women customers. All men over 30. Some flirted with the waitresses. Most of the other restaurants we frequent have prettier waitresses. One waitress wore obviously fake eyelashes. The manager was creepy. But the food was good.
After that I swung by Moe’s to redeem my birthday burrito, which I ate for lunch today. I still have deals to cash in at Red Robin, Fuddruckers, and Cheeseburger Bobby’s.
Made it home about the same time that C and M did. M had spent the day cleaning the entire downstairs of the house: kitchen, den, as well as his bathroom upstairs. Looked great. Ceil had turned on a Hallmark Channel movie, starring one of the actresses from the Pitch Perfect series of movies.
Tuesday we talked about the wings at work. Coworker Angie only eats a few things – mostly plain, but wings are on her list (when we ate lunch at the fancy Atlanta Athletic Club she ordered wings). Young Rachel is the complete opposite: the spicier the better. After all the wing talk, for lunch they brought back Wing Stop. Looked good.
Worked past 6:30. Lots to do. Stopped by RaceTrac for gas and a Coke. Dropped off stuff at Goodwill. Followed an old VW bus for ten minutes down by the river. Ceil cooked beans and rice for supper, and tossed a salad. The Hallmark Channel movie starred former teen idol Andrew McCarthy, now 55 year old – as a tough, quiet cowboy. I told Matthew that he was a member of the Brat Pack, and told him about the Rat Pack. Went to bed before the inevitable conclusion. Followed the Braves on my phone.