Ceil was cooking supper last Wednesday evening. I noted the time – 7:36 – so I turned on the Braves to see Acuna’s at bat in the bottom of the first. The top of the first was just ending, then the commercials. I made sure to be paying attention when the first pitch was thrown. 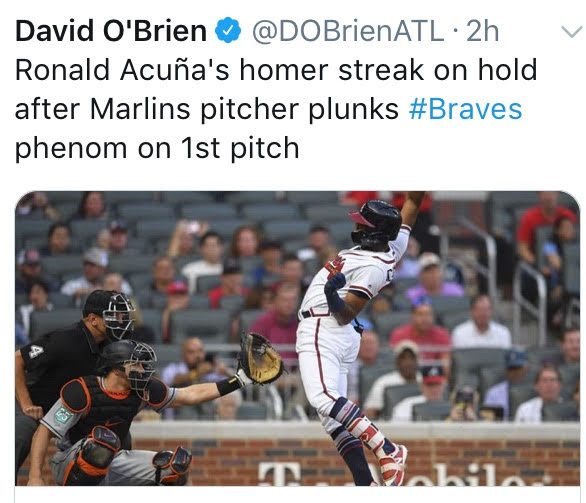 Then BAM – the guy obviously threw at Acuna, and the benches cleared. Then the game was delayed when the new pitcher warmed up. Then Acuna had to take himself out of the game. There was so much going on. Francoeur in particular was giving excellent commentary. 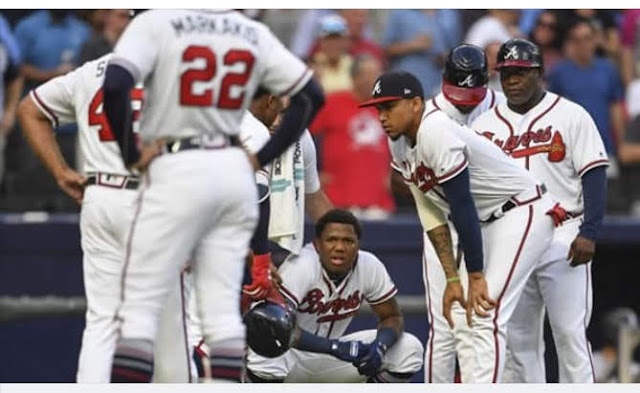 By then we were eating dinner and cleaning up, so it was a while before I checked social media, which was blowing up. Some people went from posting “what happened?” to calling out people for a lack of action, saying “Bobby would’ve…” without having seen the whole thing play out. But that’s social media: people don’t watch, then  post comments about what happened.  I set one guy straight. He didn’t have a reply, but later posted how proud he was for Snitker to stand up for Acuna. 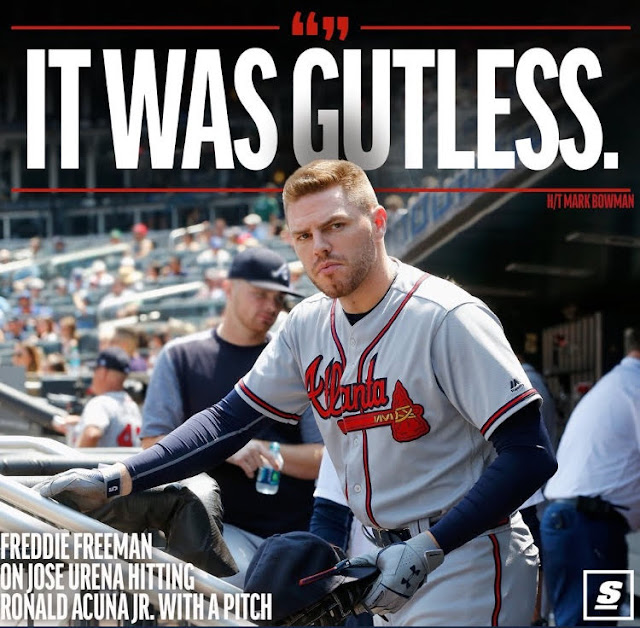 Friday I met LJ for lunch. I was giving him my Saturday Braves ticket, since we were going to Athens to celebrate Anna’s birthday. Then Anna came home Friday to celebrate, so I could go to the game - if I could find a ticket.
Worked the phones and found a Braves ticket, though I’d have to surrender the bobblehead. I wasn’t worried, as two guys were supposed to get me one, and there was a chance I’d get a third. At 1:45 I took my second shower of the day.
Left home at 2:15. Parked and walked to the ballpark, arriving at 3:10. A couple of people were waiting at the Third Base Gate. Dozens were in line at the Right Field Gate. Got to the Chop House Gate and found about one hundred in line. It had sprinkled on my walk over. In line there was a short downpour. Good thing I’d brought a small umbrella. I chatted with a nice old lady next to me in line.
The crowd increased. Saw Sandy and my Jewish friend. Katie was near but I never saw her. Bobby arrived, with his mother, brother, and sister in law. Then Kristen, her five kids, and husband. Jonathan came, and I gave him the bobble he’d bought from me. Then James and his wife. Two of Kevin’s kids got sick at the last minute, so he was a no show. Inside I saw Miss Marion and a coworker. Tanner and his parents. But no LJ. The rain was coming down and long lines of fans were streaming in. Instead of the three bobbles I’d hoped for, I was lucky to get one.
There were so many fans taking shelter from the rain, the concourses were gridlocked. I went upstairs to my seats. Saw legendary usher Walter Banks heading upstairs. After being on my feet for most of the day it was nice to sit for a spell, watching everything getting ready for the game. Folty struck out the side in the first, but gave up a hit in the second. Acuna lined a leadoff single. Dude continues to hang out in exclusive company. 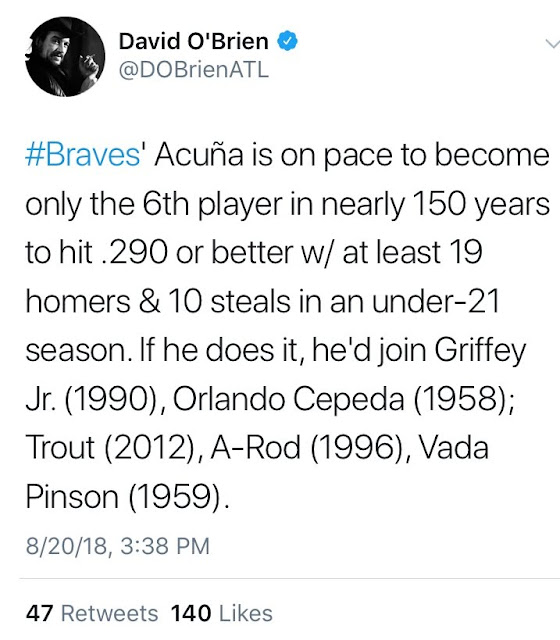 Later the rain returned. After over five hours I headed back to my car. I headed north on 75 to 575 to Cheeseburger Bobbys. Acuna continues to amaze. 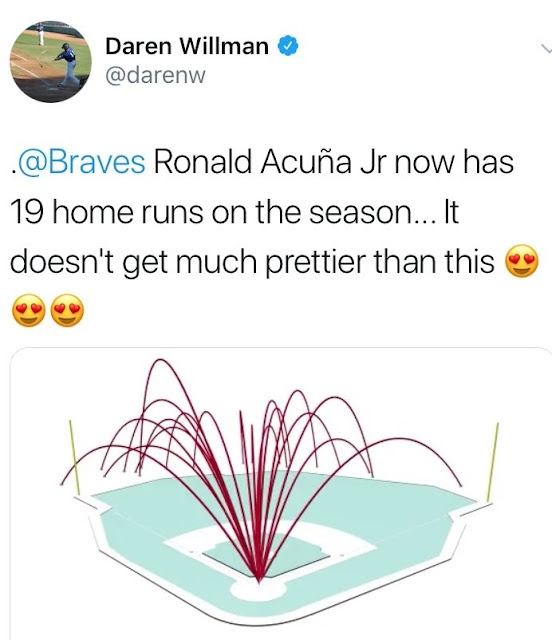 Sunday afternoon we watched the Braves. Minter is young, and will eventually be a beast, but still has more developing to go. 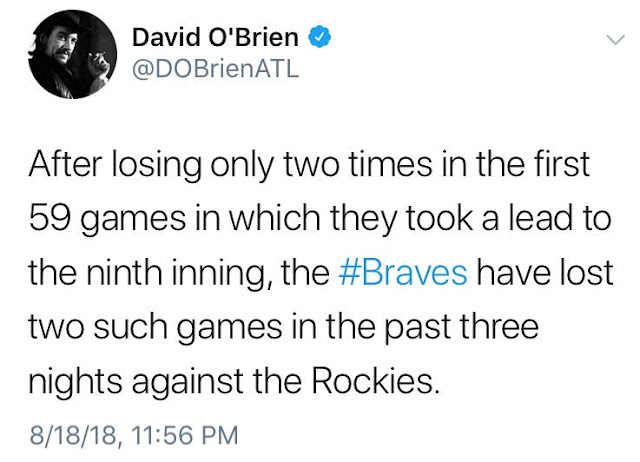 While the Rockies have a record similar to Atlanta’s, their record would’ve been better had  they not had to face the Dodgers and DBacks all season. The Braves have faced an easier schedule: the Marlins, Mets, and Nationals. Conclusion: the Rockies might be a better team. Still, they needed luck to win all four games (and timely balks, errors, and bad swings). And Acuna? 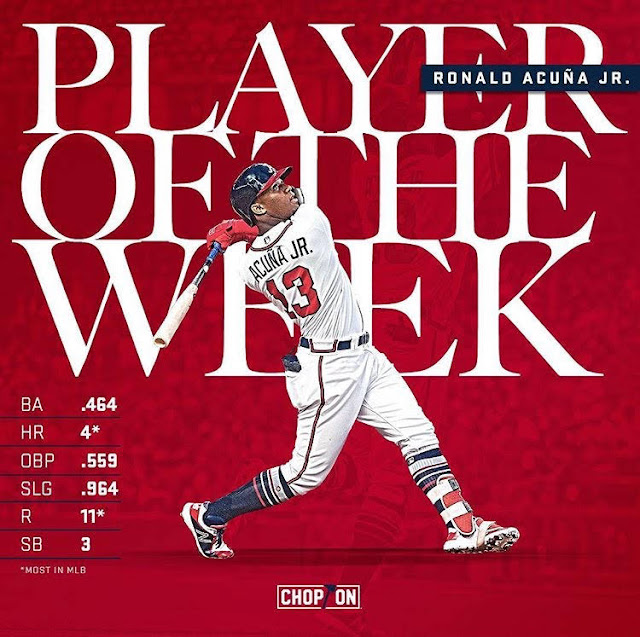