Made it to today's game after all. Despite threatening skies, fans turned out in droves - early - for the Chipper Jones Crazy Train bobblehead / UGA Night / Social Media Night. 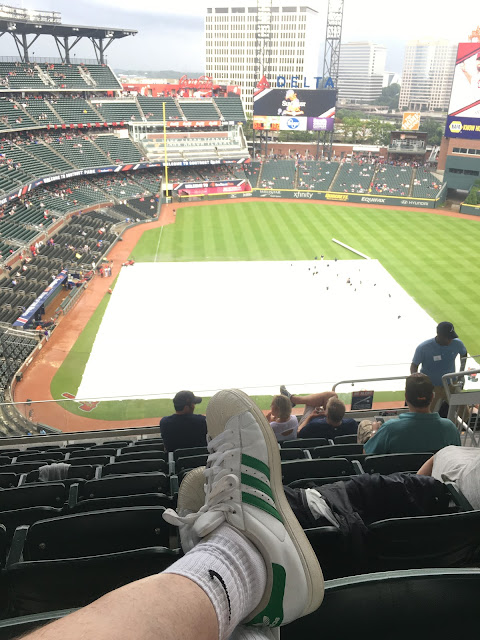 Left home at 2:15, walked the mile and a half through a light drizzle, and arrived at the Club House Gate before 3:15, an hour forty-five before gates open. There were already a hundred people in line. The tiny umbrella I brought came in handy. 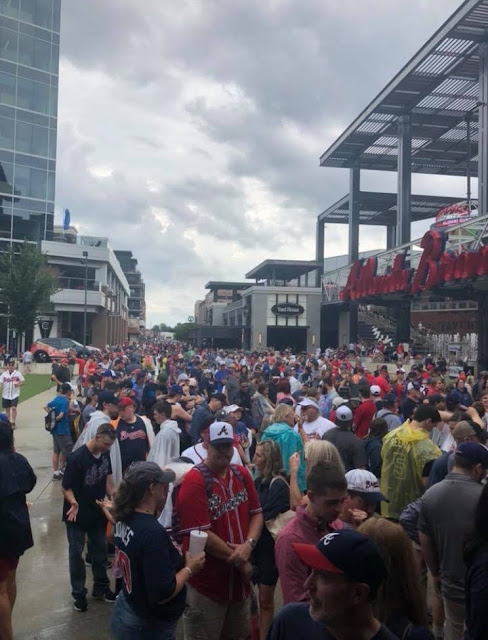 On the way I snapped a pic of the brick of the day.
Need to read up on ol' Whitlow. 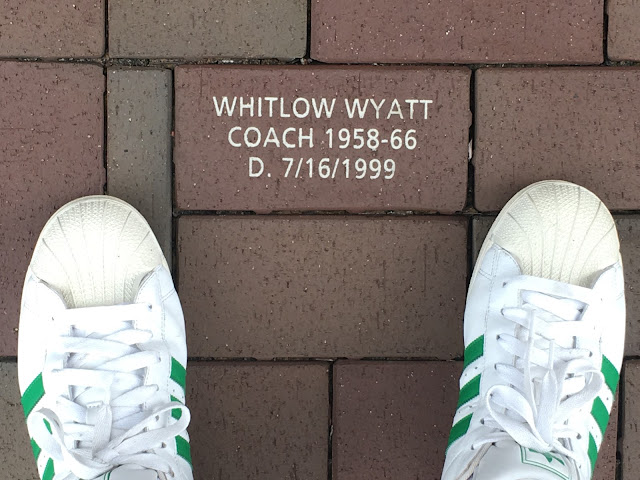 With the huge crowd streaming inside to seek shelter from the rain,
I scampered upstairs to my seat earlier then usual.
Had a good view of the Hank Aaron Terrace in left field.
A few home runs have been hit up there. 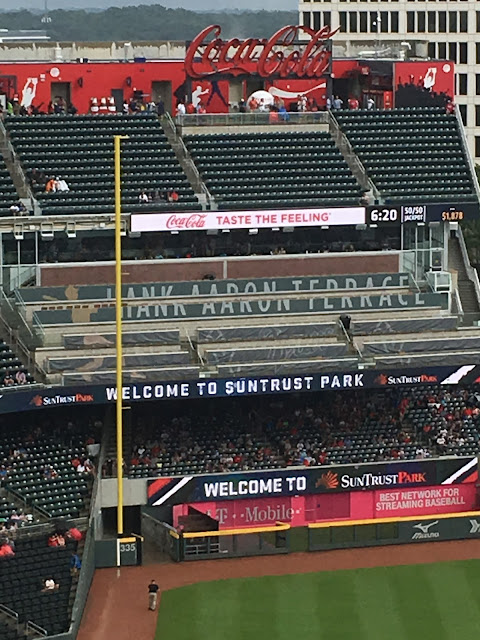 After a good rain,
the skies cleared and the ground crew finally pulled off the tarp. 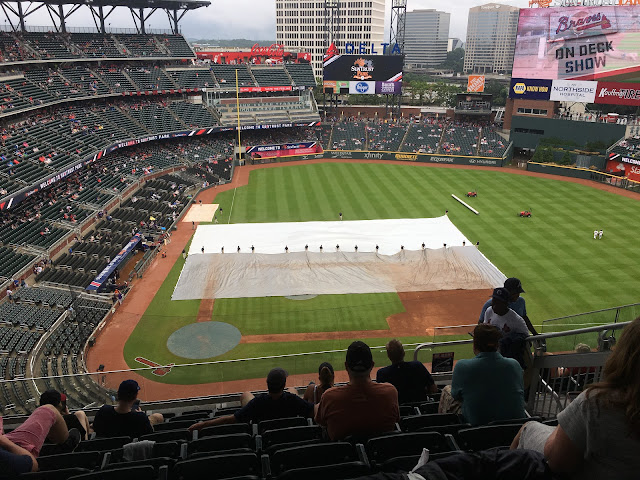 Once the rain cleared, from my seat I could see buildings downtown and at Perimeter Center. The sun shone on the Cobb Civic Center, to the left of the Travelport building.

The Mill Creek High School chorus sang the national anthem. Just as they began a girl on the far right collapsed. Two other girls struggled to lift her to her feet, but at the end of the song she was no better. Two Braves trainers in navy shirts hustled out to help, and they maneuvered her toward the stands behind first base. The chorale director (in white) came along. 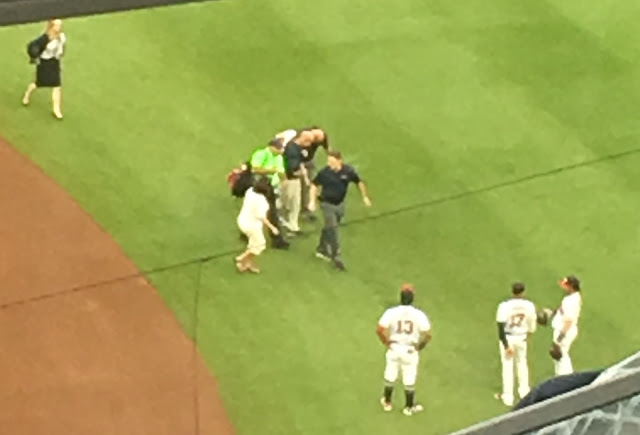 Before they reached the foul line the girl had to lay down, near where Dansby, Camargo, and Acuna were warming up. More medical personal came out to help. Acuna walked over to peek in. As the trainers worked, final preparations were taking place to start the game. The managers met with the umpires at home plate. The relievers marched out to the bullpen, and catcher Suzuki and starter Foltynewicz (top) made their way in. 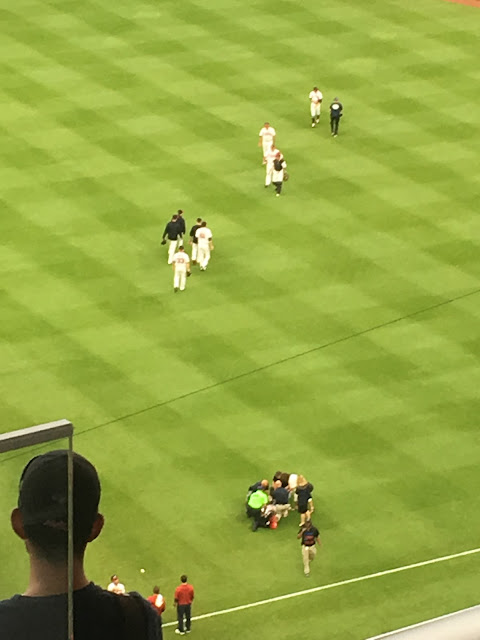 Eventually the girl was lifted onto a stretcher, then loaded onto a medical cart. As tart made a U turn to the left and took the warning track counterclockwise around the right field corner and exited out the centerfield gate, the Braves starters took the field. The game started just seconds after the gate was closed.

With Acuna setting the fan base abuzz, I donned my green #82 St. Patricks Acuna jersey for the game, with matching green striped adidas shell toes on my feet. For a change of pace I left the Kelly green Gwinnett cap at home, and wore my camo green Braves cap instead. 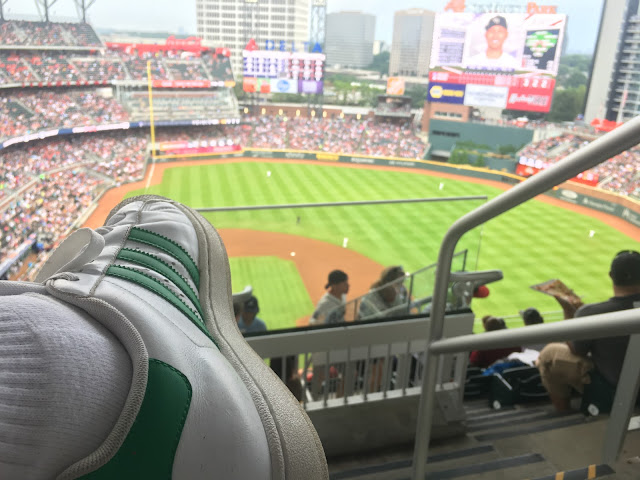