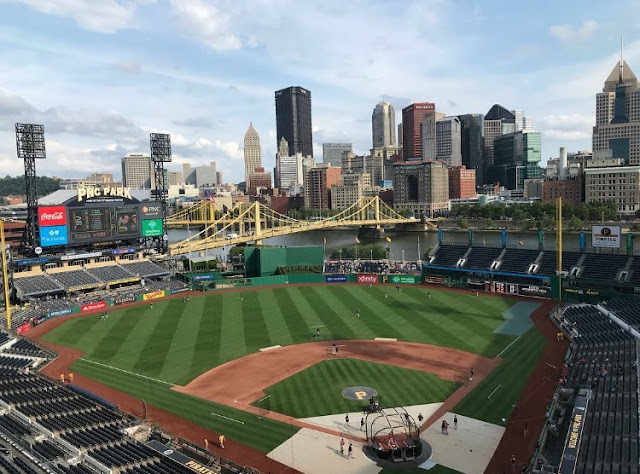 The Braves were in Pittsburgh this week. Like in San Francisco, everyone goes on and on about how beautiful the view from the stadiums are. And they are. And there are always those unhappy souls who moan about the Braves not having the absolute best of everything – the best stadium view, that they don’t win every game 100-0, that they don’t sweep through the playoffs and win the World Series every year.
Last night a guy said Turner Field could’ve had a “cool view” like Pittsburgh if they hadn’t built the exclusive club above the left field stands. He was wrong on several counts. While in Pittsburgh the yellow Clemente bridge and the downtown buildings can still be seen from the lower level seats, the view always pictured is from the press box high above the field (of from the upper deck). The hotel across the river is less than a half mile from home plate. There’s the outfield fence, a sidewalk, the river, a street, and the downtown buildings. 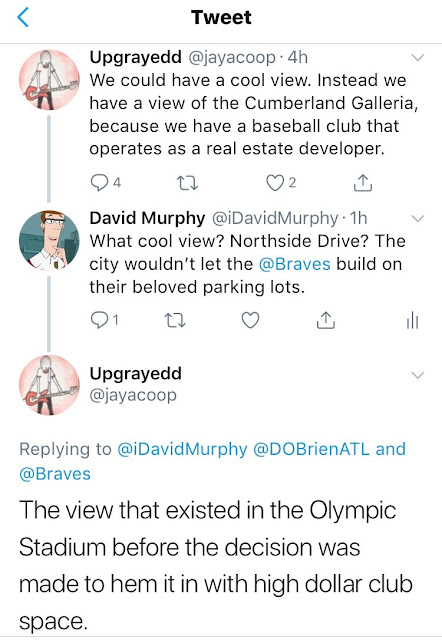 In Atlanta the downtown buildings are over 1-1/2 miles away from home plate. In between are a sea of parking lots. The buildings do not loom over the stadium like in Pittsburgh, they are off in the distance. The stadium club does not block the view of downtown from the press box and upper deck – the club only blocks the view of the ugly parking lots. Several downtown buildings can still be seen from the seats behind the plate, between the stadium club and jumbotron. Sorry to confuse the situation with the facts. 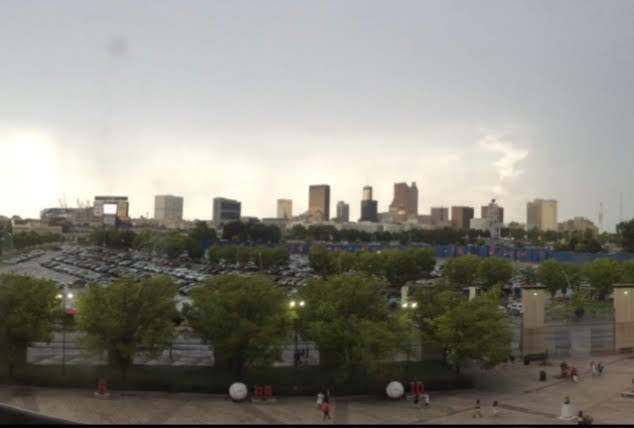 Beauty is most certainly in the eye of the beholder. At SunTrust Park most of the outfield is blocked by the Omni Hotel and Comcast Building, whose rent helps pad the Braves payroll. You really have to look to see the Cobb Galleria and Cumberland Mall. But SunTrust Park is one of the few places around where you can see downtown (and Mercedes Benz Stadium), Midtown, Buckhead, Stone Mountain, Perimeter Center, and Kennesaw Mountain. Now that’s a view. 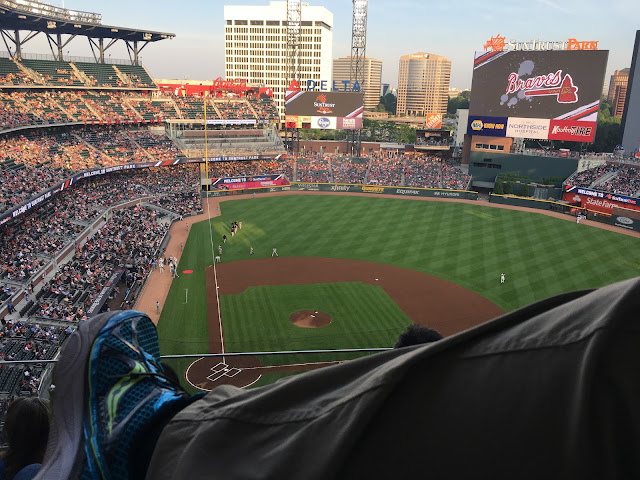 If we’re going to run down a new stadium view, what about Nationals Park in Washington. You’d think you’d be able to see at least a glimpse of our nation’s capital or the monuments, but you have to strain to see even a peek.
I can talk about stadiums all day. In 1995 Pittsburgh was playing in Three Rivers Stadium. In Cincinnati you saw Cinergy Field, formerly known as Riverfront Stadium. I saw that ballpark from the highway once or twice.
In 1971 the San Francisco Giants were playing in Candlestick Park, located on the bay. You can’t see it from the highway, but I saw the highway exit for the stadium. Fun fact: the Beatles played the first concert at Candlestick in 1966. Paul McCartney played the last concert, in 2014. We went to a game in the new PNC Park. Great views.
Ceil and I attended a game in Shea Stadium, but we didn’t get to see Yankee Stadium (I tried to work it it). When Will went to NYC in December he got to take a Yankee Stadium tour.
On work trips I’ve attended games in Houston, Arlington, Dallas, Tampa, and Miami’s Orange Bowl (GT at Miami). Also saw games in Washington, Boston, St. Louis, Macon, Rome, Chattanooga, Greenville, Augusta, Athens, Knoxville, Birmingham, Auburn, Chapel Hill, Clemson, Charlotte, New Orleans, and both Wrigley and Comminsky in Chicago. Also sixteen other arenas around the state. Driven past Tiger Stadium, Dodger Stadium, Anaheim Stadium, Kaufman Stadium, Reliant Stadium, the Citrus Bowl, the Gator Bowl, the Big Sombrero, the Rose Bowl, the Silverdome, Soldier Field, Arrowhead Stadium, and the Astrodome.
Drives me crazy when a batter will take strike three, then get mad at the umpire. Uggla and BJ Upton were real good at that. Also that a major league pitcher (heck even a minor league pitcher) can’t throw a strike, especially when he needs to. Or to walk the leadoff batter. Drives me crazy.
It’s a different game now. Hank Aaron never struck out 100 times in a season. Greg Maddux didn’t walk 1000 batters in his career. When he got to 999 he decided he wasn’t walking anyone else the rest of the year – and he didn’t.
Did you watch the bottom of the ninth Monday night? Coming in to the game Winkler hadn’t allowed a run in his last ten appearances. Leadoff batter blooped a single – after Winkler didn’t get a strike call that the umpire had been calling all night. What would you have done – leave in Winkler or take him out? After a strikeout the third batter chopped a swinging bunt that died in the grass. Winkler’s best play was to throw out the batter at first – advancing the tying run into scoring position, and bring the winning run to the plate.  Would you leave him in or take him out? Who would you bring in?
In Tuesday’s game I was liking Sobotka. Man that Pirate reliever before him kept throwing ball after ball. Hit Suzuki and almost hit a couple of other guys. Hit his catcher, allowing Flowers to score easily. Then Sobotka came in and threw strikes. Make’em hit it, I always say. That’s what Maddux did. If the batter hits a pitch, half the time he won’t make good contact. Half the time he hits it right at a fielder. And half the time he might get lucky.
I think Barney gets groomed too often. He looks better with longer hair. You see lots of labradoodles with the long hair.
The kickoff verses for “what you believe and why it matters” are 2 Timothy 3: 1-5; 4:3-4 and Matthew 24:4-13. I’ll keep you posted.
Monday night I worked until almost seven. Ceil made hash browns, tossed a salad, and warmed the rest of Sunday’s Whole Foods chicken. Was almost nine before we finished the dishes. Watched the Braves and a Hallmark movie.
Tuesday night I worked till 6:30 again. Ceil cooked black beans and rice, and tossed a salad. Watched the Braves and a Hallmark movie. M went to a coffee shop. Will had his six hour / 300 question board certification test yesterday. Afterward he played golf at Chandler Park.  He must’ve been pretty brain dead afterward. 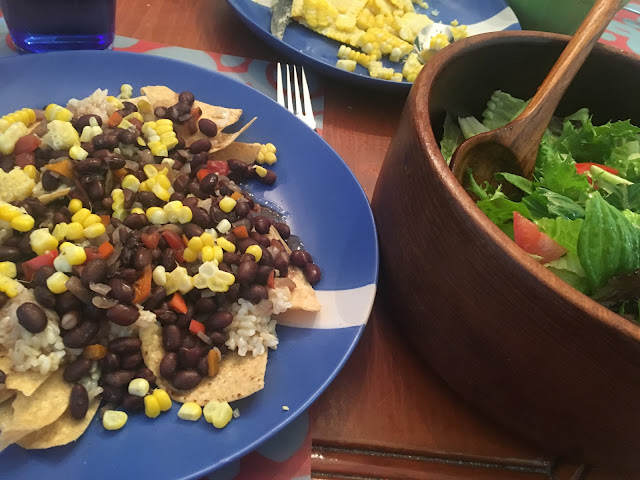