Nice Opening Day win. Good defense. Hated that Bethancourt had to hit fifth. When Chris Johnson returns to the lineup Bethancourt will drop. Not a fan of Eric Young Jr but perhaps he can have an above average season like he did that year in Colorado. But he hustles and plays defense and has a good attitude, unlike the Upton he replaced. There will be games when the ball will bounce the other way. The Braves will probably lose 70 or 80 games, about three every week.

Told you that former all-star closers Johnson and Grilli would solidify the bullpen, especially after working with Roger all spring. Fans are really showing their ignorance, disliking small ball when that's exactly how the game was played until the 1980's. The Cardinals and Giants and Royals still play that way, and that's why they've been successful.

Every day we should remember how much better off the Braves are without the worst player in baseball and his $47 million salary. Made trading Kimbrel worth it. Getting 2 prospects, a backup outfielder happy to be a Brave, and a draft pick was just gravy. Now the Braves have FIVE of the top 75 picks in the draft. If the GOAT is the Greatest Of All Time then Melvin is the WIB – the Worst In Baseball.

Kimbrel often drove me crazy last year  - walking batters and throwing a lot of pitches. That's another reason why he's no Mariano Rivera. Lots of dumb comments going around.

ROB: I liked your take on the trade.  I hate it as a fan of this years team, but it was the best for the team long-term. I think there is a key point that has not been mentioned in the Kimbrel discussions. Even though Kimbrel is an extraordinary talent, Fredi (as would every other MLB manager) does not use him in a way to maximize his talent.  The most blatant example was the 2013 NLDS - what would have happened if Kimbrel had pitched the 8th to the middle of the Dodger lineup, leaving Carpenter to pitch the 9th to the (easier) bottom of the lineup

If you are going to use the 9th inning closer model, you don't need Hall of Fame caliber talent to fill that role.  If a manager was bold enough to go back to the 70's "fireman" model (ala Fingers, Gossage, etc) a talent like Kimbrel would be much more valuable than he is now.

REID: I'm sort of neutral on the whole trade thing. Kinbrell always gave me a headache everytime he came in. It will be an interesting year, especially how many fans turn out. I heard one commenter say the Braves ought to trade stadiums with Gwinnett.

We were having a discussion Sunday at lunch about the foul in the Ky/Wis game where the player hit the fellow in the face and knocked him to the floor. Andrew said it was intentional, while Claire and I said it was not intentional. Did you see it ?? What did you think? Don't understand why refs didn't call anything on it, while the announcers were saying it should have been a flagrant. ??? But my question was and is: did the player intentionally hit the fellow in the face.  Did he MEAN to do it ????
ME: No foul was called, even after the refs watched the replay. Even if it wasn't intentional it sure looked like a foul to me. Then when the Wisconsin guard got called for the elbow down at the other end of the court I thought the Badgers had lost. It didn't look intentional to me, except I couldn't figure out why the Kentucky player made the arm motion he did. From where he was looking it didn't seem like he knew the Wisconsin player was there. But you never know.

The Wildcats lose one game all year and walk off the court without shaking hands. I didn't see it. Was Wisconsin out in the middle of the court celebrating for so long that Kentucky just left? Usually teams follow their coaches to shake, but if the Badgers weren't there, was Kentucky supposed to wait around? I didn't see it. After a World Series win there isn't hand-shaking. In football players pray and chat, but not so much in basketball.

Saturday did you see the national anthem before the Duke/Michigan State game? Loved how athletes from the Final Four schools sang. They all had good voices. Matthew isn't afraid to sing around the house or in front of his cousins and peers. Wish he had sung in choir as a child to better have trained his voice. 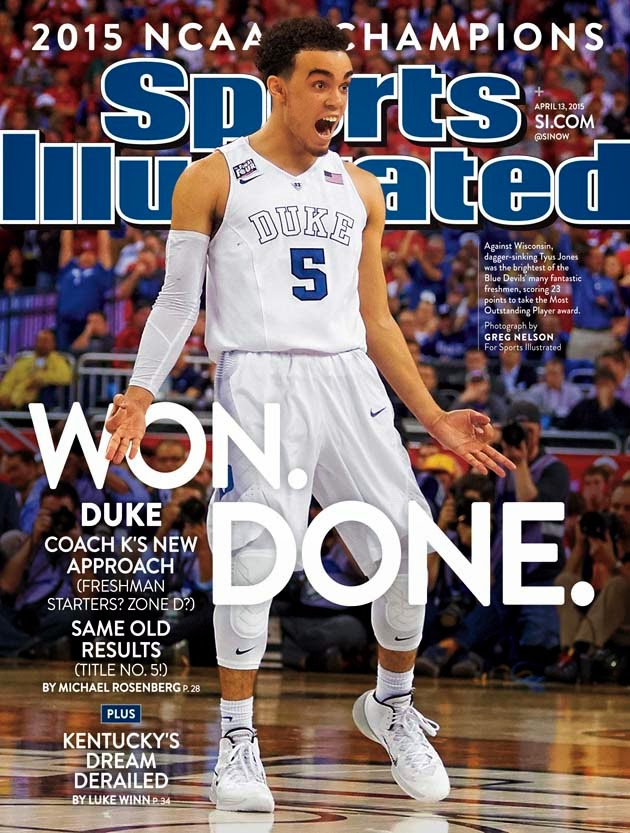 Great national championship game. The first half went by quick, and the second half almost as fast. A two hour game. Duke didn't give up even when they fell behind what, nine points? For a while it seemed like nothing Duke did was working. With their two big dogs in foul trouble the subs brought them back. That young white guard for Duke looks like a young Kurt Russell. Kaminsky had a great game, but after being schooled so many times Okafor came back from the bench and put the nail in the coffin. So often that's what Duke teams do. As Coach K ages he's starting to look like a taller, darker-haired Dean Smith.

SUNDAY: There were 36 at the Methodist Church. I knew most of the people. I figured there was enough seating for 100. Pulled out of SC at 330 with the dog. Matthew plays songs from his phone over the car speakers, which is great. Made it to Covington before stopping to eat. Everything was closed except Little Ceasars. While gassing up at QT I checked my phone. I'd received a rare text from Lang: "hear about the Kimbrel trade?" I texted that I'd been on the road. He replied "at least they got rid of Upton." Got back in the car and Anna uttered her "blowing up on Twitter" line.

We retrieved my car from my office. M wanted to drive, which gave me time to read up on the trade. Seeing the weeping and knashing of teeth on  social media (led by the AJC) I felt like posting something positive. Little new info in my post as you know, but just timely. My young truck driving friend Mr. Glover is passionate like Ray Kinsella in Field of Dreams, misdirected though it might be.

CRV MPG update: Left SC with MPG meter at 29.5 with 350 miles on the trip odometer, making it hard to improve on. Exited in Covington with the meter reading 30.6 MPG. Started back at zero and drop 44 miles to my office. Arrived with a reading of 34.5 MPG. The secret? Drive under 65 MPH. Do that in my Civic and I'll get 40 MPG.

MONDAY: Mexican fixings for dinner. Like Ceil I made a salad from lettuce, rice, beef, and corn. Then C watched The Voice while I took a nap before the game. On my way home from work I found a ZaZa Pachulia bobblehead. M is on spring break this week. Thursday he travels to Cincinnati with his friend McKinnon and her mom. Trying to get him to pick up a bobblehead at Saturdays Reds game.

Shoes have become a profitable eBay item. I'll buy a pair I like at a thrift store knowing if they don't work out I can sell them for three time what I paid for them – or more. Nike free running shoes sell quickly.

When I was growing up we would only see my cousins occasionally. Two lived in Florida and were older, but we rarely saw the three in Decatur. All on my mother's side. Now I'm FB friends with 4 of the 5 (and a nephew and niece). We wish each other HB and like an occasional post. One cousin happened to be visiting Macon when my dad was in the hospital recently but I missed her. My niece does horse shows and knows the Hurts. My cousins on my dads side live in Kansas City, and I haven't seen them since I was a kid. My dad contacts them once in a blue moon I think.

If the wedding is January 9 and Clemson were to make the college championship game scheduled for January 11, Will's cousin Ben would miss the wedding. Possible, but Clemson has a tough schedule: FSU, Tech, Notre Dame, Louisville, South Carolina, and possibly the ACC Championship Game and Semi-Final Bowl Game. GT returns 8 starters on defense plus Orange Bowl MVP QB Justin Thomas – but lost virtually their entire running back core to graduation. I predict GT wins another division championship.

Other wedding news: looks like there will be eight bridesmaids (including both Annas) and supposedly eight groomsmen (including Matthew, MC's brother Thomas, and Kevin). Will stayed in Athens this weekend to work and celebrate Easter at his home church. The garage fixed several things on his Jeep and only charged $385.00. Pretty good.