QUIZ: Fifty years ago the first baseball game was played in the Astrodome. Who hit the first home run?

TUESDAY: Worked til 6:30 catching up and paying bills. Stopped on the way home and found three more bobbleheads: the Virginia Tech HokieBird mascot, a cute little mouse mascot, and Ilya Kovalchuk in a navy jersey – with the senior discount. I already had Kovalchuk in a white jersey and a light blue jersey.

Finished one book on CD so I turned on the Braves in time to hear a good part of their 7 run first inning. Sounds like Chris Johnson is getting his swing back and Kelly Johnson is hitting the ball hard. KJ hit over 300 in spring training. They have several players who can play both second or third. KJ can play six positions and probably shortstop if needed.

Saw a www.TalkingChop.com article saying the Kimbrel/Upton trade was a huge win for the Braves. The article was posted Sunday night AFTER I had posted my essay saying the same thing.

Good that Jamie got to pitch the ninth. Walked leadoff hitter Prado on four pitches, then settled down to get the next three outs. Batters are going to take a lot of his pitches because he his borderline wild. He'll be great if he doesn't walk batters – especially the first batter he faces. You'd think pitchers would learn this after having the same problem year after year.

Pesto pasta and salad for supper. Ceil watched The Voice and cleaned the kitchen while Anna and I worked on UGA registration stuff. M spent the night at his old friend Josiah's. 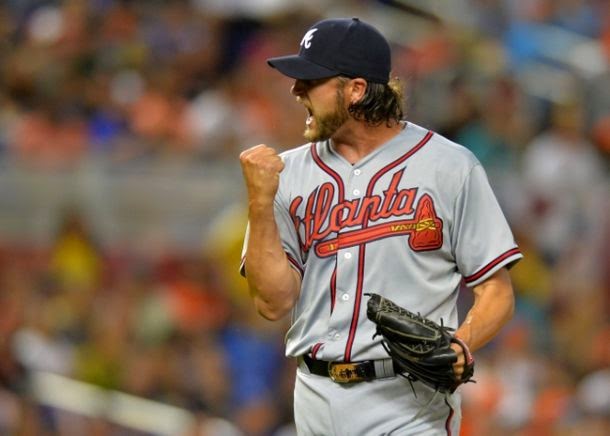 WEDNESDAY GAME 3: BRAVES 2 MARLINS 0: Good stories on the broadcast about Grilli. Asked if he was going to celebrate his season opening save on South Breach, he replied that he was 38 and tired, and was going to bed. With a 2 run lead last night he threw nothing but strikes. I like this guy. Johnson and AJ and Miller and others did well.

Those small ball haters still upset that swing from the heels players like Justin, Gattis, Heyward, Melvin, and Uggla are gone should've liked last night's game, where the only scoring was AJ's 2 run home run. Nice interview with AJ after the game, where he wanted to talk about the pitching and not his home run. Not sure if he'll fit in if he doesn't like to hug. But Freddie might be the lone remaining hugger, with Uggla and Gattis and Heyward gone. The only 3-0 team in baseball.

The AJC continues to stir up anti-Braves sentiment. They posted pictures of Kimbrel in a Padres uniform and asked what people think. No mention or photos of Melvin/BJ/Junior in a Padres uniform. Sure, he's hurt, but surely BJ appeared at a Padre press conference and put on a cap and jersey.

The AJC also continues to stir up anti-new Braves stadium sentiment, anti-new Falcons sentiment, anti-Chickfila sentiment, anti-anti-climate change sentiment, and anti-Christian sentiment. This isn't the editorial page, this is the front page. Anything to sell papers and draw website clicks and stir up the populace. But no outrage in the media about homosexuals bashing the rights of Christians or what should be done about islamists massacring Christians. All the changes to AJC.com have made it impossible to find the stories you're looking for. I'm sure their business is way down.

People are beginning to recognize that all the racial tension is being built up by the media. You go to a mall or a game or a church or an office or a store and there is no racial tension. But get someone like Al Sharpton in front of a camera and they'll put on a show. They're not interested in helping anyone. They're just in it to make themselves more money and power. Same with the TV stations who go out of their way to report bad news. For decades the poor have aligned themselves with one political party and what has changed?

Two coworkers worked until 7 pm Wednesday night so they could take off Thursday and Friday. Both will have to work during their time off because they don't have backups. I've already gotten drawn in to one emergency for them, causing me to miss a conference call and delay returning a project to my customer. With everything going on I'm not sure when I'll fit in two other projects I'm supposed to do. Last Friday up in SC I worked a half day from the kitchen table.

Gwinnett games are fun, but I'll only hit the bobblehead games (which are all Saturday night games). Easier to go to games at the Ted. Unlike this year, last season wasn't too exciting in Gwinnett. Bethancourt was the main draw. No stud pitchers or infielders, just no names with the exception of Constanza, Terdo, and Cunningham – and those three were down off better previous seasons. Too bad Terdo had a nice spring then got beat up at the end. The late trade with the Padres didn't help. The good thing about releasing Constanza is they won't be tempted to bring him up. I guess EY is a better version of Constanza. I haven't heard if Van Earl Wright will be back at Gwinnett. Watching Peraza will be worth the drive.

The Friday night pregame should be interesting. I'm seriously considering marching in that July 3rd Star Wars parade at Turner Field. Will be fun to take pictures with Wookies and Storm Troopers. I told Ceil she could go as Princess Leia and she got excited.

No Augusta in my recent past or immediate future – I just read an interesting article and tweeted some highlights. I'll watch on TV.

This year GT beat UGA in football, basketball, and baseball. There was an email going around with the scores so I sent it to Will and Anna. UGA probably beat GT in golf, softball, track, swimming, volleyball, and men's and women's tennis.
Started a book on CD about all the corruption in college football, by Arman Kataian.