Really busy. Monday I worked until almost seven. Got lots to do the rest of the month – I’ll have lots of orders to review. Working extra late means I don’t get home until late, leaving little time to do stuff at night. No time for house projects or writing projects.

Ceil had cooked homemade refried beans and some fancy healthy rice. I made quesadillas. M was at work. Ceil was working on a last minute art project for school, which ends this week. At nine after supper I worked on my laptop and had The Voice on TV, then MASH. M came in and I had him watch the scene where Hawkeye and Trapper played Groucho and Harpo. Even Ceil laughed.

Will had his interview with a doctor’s office in Buckhead.

Tuesday: worked until 8 pm. So much to do. I’ll be swamped until month end. Ceil had been working on school stuff and hadn’t eaten all day so I picked up a Willys burrito bowl for her. Stopped by Taco Bell and the library for me.

Ceil needed something printed for school. Office Max had let her down and treated her poorly. She’s been going there for years to get stuff printed, and they treated her like trash. Ceil called customer service but the lady in the Philippines couldn’t speak English, so we’re through with Office Max. All their stuff is overpriced anyway.

Instead I went to the FedEx store on Johnson Ferry in front of the Publix. The employee was very helpful, checked everything twice, spoke perfect English. I was in and out in a flash. Put Office Max to shame.

With all that running around I didn’t get home from work until after 9:30 pm. Long day. Watched Chicago Med and the Braves, and worked on my laptop.

The umpires in the replay center in NYC don’t want to make their buddies on the field look bad. A travesty that makes the entire MLB look bad. Managers can’t comment because they’ll get fined, but the media and public are all in agreement: replay sucks.

Like all teams, the Braves need pitchers. A closer, in particular. After Viz blew the save the manager said other relievers would be getting save opportunities. 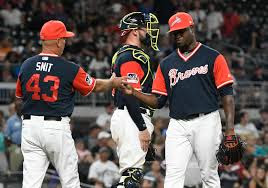 Saturday at the Stripers game I was busier than usual.
1. Sold two tickets to LJ ($16).
2. Sold two tickets to another guy I had to meet up with ($16).
3. Then the gates opened and I went in and out three times to get a total of four bobbleheads.
4. Then I went back outside to meet up with a guy to sell him a bobblehead from last year ($20).
5. Then back inside I was putting bobbles in my backpack when a lady wanted to buy one ($20).
6. Had my picture taken with several Star Wars characters.
7. Met up with another guy to sell him a Braves bobblehead ($25).
8. Traded my coworker’s May bobble to get her an April bobble.
9. Then coworker Angie’s daughter wanted an April bobble, so I made a trade for her as well.
10. During the game I sold another bobble on eBay ($26).
11. Traded another bobble for a future Braves bobble.

Our bed is high and Barney is getting up there in years. I’m starting to get worried about him. He can do a standing high jump to bound on the bed. Most of the time when I am laying on the bed he is able to jump up and somehow avoid landing on me, even in the dark. Since it got hot he’s stretching out on the tile floor more, and sometimes sleeping downstairs and not on the bed.

I looked up where Isabel’s park is located. Matthew has friends over there, and it’s not far from where David Norman lives. The Norman boys have been back at Becky’s house cleaning out old stuff, and posting funny videos about their finds.

I need to wash cars but if its going to rain then maybe not. Anna’s Jeep isn’t running well but Matthew wants it. I need to either get me or Anna a new vehicle. Not sure what I want, since I probably don’t need to get that little two seat hybrid Honda makes.

I had listed all the eating we did over our long weekend. On the way home Friday we would’ve stopped to eat again but Barney was home alone so Ceil didn’t want to stop any more.

Now 680’s Steak Shapiro is making fun of Christians. Likening the drunk wife berating the golfer for poor play to Steak coming home and getting harassed for having ratings lower “than a Christian station…”

Steak doesn’t need to be on live radio, especially in prime drive time. He mispronounces words and relays inaccurate information. He is 680’s answer to ESPN’s Chris Berman – a joke. A buffoon. His coworkers constantly make fun of him. Not just one or two coworkers, but almost all of them: Fin, Sandra, Dimino, Mattlanta, Chuck, Chellini.

Steak is constantly talking up his beloved Boston teams and bashes Atlanta teams – and fans. Why doesn’t he move back to Boston? Because they wouldn’t have him. He couldn’t make it on air up there. Every time I listen to five minutes of Steak I have to change the channel. Guess this makes me…Dave Murphy: Steak Basher.