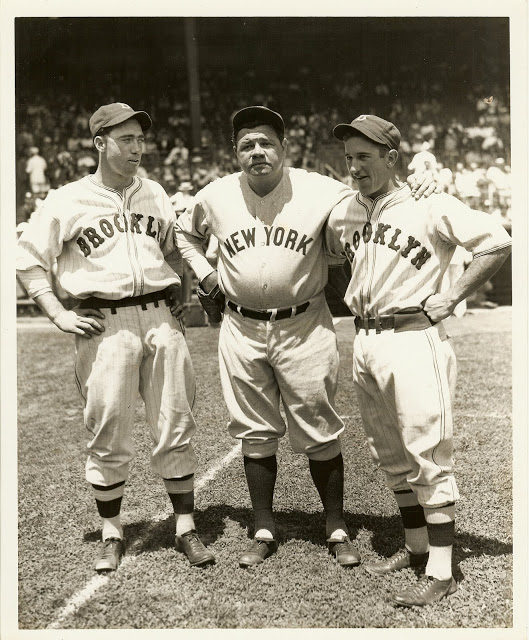 My connection to Babe Ruth: I hung out with L.A. Smith at the hot stove league. In 1950 L.A. was batboy for manager Jim Bivins in Danville Illinois. Bivins was the last pitcher to face Babe Ruth (see story below).

But not as close a connection as Ceil, who knew former major league pitcher Van Lingle Mungo of Pageland SC (above left). Ceil said Mungo was in the picture behind Lou Gehrig when he gave his famous "I am the luckiest man on the face of the earth" speech between games of a doubleheader on July 4, 1939 between the Yankees and Washington Senators. But Mungo spent his entire career in the National League, playing for the Dodgers (in 1939) and the Giants. Sounds like an investigation is in order.

Mungo gained further notoriety in 1969 when his name was featured prominently in a song whose lyrics were comprised solely of baseball players from the 1940's. It even landed him on The Dick Cavitt Show.

A fellow hot stove member penned the following eulogy about our friend L.A.: We are saddened by the death of L.A. Smith on April 11 at age 80. L.A. was an active member of the Cumming Hot Stove League for several years. At one of the first meetings he attended he showed a photograph of the 1950 Danville (Illinois) Dodgers, which featured twelve-year old "Leonard" Smith as the team's batboy. He identified several members of the team, including its manager, Jim Bivins. A little research showed that Bivins played only one season in the Major Leagues, as a pitcher for the Philadelphia Phillies in 1935. However brief the career, it was highlighted by the following two events:

L.A. was delighted to discover his brush with baseball immortality and mentioned it on more than one occasion. Whenever L.A. attended a Chapter gathering, a Tallant Hot Stove, or a Rome Braves game, he always brought with him his smile, even as his health deteriorated. He will be missed by his wife and family and by his baseball friends in the Magnolia Chapter.

Thursday night Ceil wanted to go out and split a sandwich. Normally we go to Moxie Burger but I remembered a new place had opened in The Avenue East Cobb: Stockyard Burgers and Bones. Both the grilled chicken sandwich and fries were excellent. The place was filled with typical East Cobb customers (like us). Not as many "cool people" as Moxie, which has a more relaxed atmosphere. I doubt we'll go back to Stockyard.

Busy day at work on Friday. Left at three and headed to SunTrust Park. Got to visit with Jeff Yearwood for a few minutes. Was at the front of the Chop House Gate when legendary usher Walter Banks came out to visit. Once inside we walked around and I took a bunch of pictures of the different jerseys fans were wearing – both Braves and Giants.

Friday night before the game I was standing on the steps near the First Base Gate talking to two friends. A boy walked up to me and said "I lost my mom." I looked and him and asked "Are you a Maldinado?" He was a member of a Gwinnett County bobblehead family I see in line before games. He knew his mom's number, and Kristin remembered who I was (she'd gotten me into the April 20 game). While we waited for his mom I asked the boy if he liked Star Wars. Sadly, he softly replied "no."

The first home game for Ronald Acuna and Joey Bautista. Freddie Freeman hit a two run first inning home run to give the Braves and early lead, but the Giants batted around and that was that. With all the teams and players swinging for the fences and striking out so much, the Giants seem to buck the trend and swing for singles and doubles. On Friday Mattlanta was all excited about the Braves while he said others were more hesitant. I have no problem with people joining the bandwagon, just don't start badmouthing after losing three straight. They're still 5-3 for their last eight games.

The Braves are doing better than Grizz Gaming. Friday afternoon on 680 the talk was old-timers saying to not get excited about the Braves YET, since the plan wasn't for them to really compete until next year. This year they were supposed to be better but not championship caliber. But the guy on 680 wanted to be excited now. I'm ok with people getting excited now – but don't get depressed and don't badmouth the team when they get swept like they did. The Braves are still 5-3 in their last eight games.

With Swanson hurt the initial decision to demote Tucker and keep Culbertson may have had to do with this week's series in Tampa. Culbertson will probably play both games against the Rays.

My friend LJ used to be the GM for several minor league teams. His baseball card was once listed in a baseball card guide like Becketts. Met him in the dollar line at Turner Field, and also at Gwinnett.

Walking through the crowd at the game a guy bumped into me, poking my elbow into my rib. I lost my breath and thought I had a cracked rib, but I was ok on Saturday.

Saturday Ceil, Anna, and I drove down to the Carter Center farmers market. Traffic on the downtown connector was jammed so we took 400 to 85 to North Druid Hills to Briarcliff, and saved 20 minutes. A nice scenic route. Lovely old trees at the Carter Center. Then we drove over to Krog Street Market and had lunch at Superica. Forgot about Cinco de Mayo, which made the wait 45 minutes. We passed the time browsing the other stores.

I ordered a brisket sandwich topped with fried eggs. Ceil got a salad and Anna got Huevos Rancheros, another fried egg dish. Traffic was gridlocked getting back to the interstate. Made it home by 4 pm. Took a nap before the Kentucky Derby. Anna went to a wedding shower with Mary-Clayton.

Sunday morning JFBC. The staff member how teaches our Sunday School is going on a short sabbatical (and a five week road trip out west with his young family). The three guys filling in should do a good job. Stopped by Whole Foods after the 11:15 service so we didn't eat lunch until two. Watched the Braves and took another nap.

Got Anna's Jeep in the shop today. Saturday night I looked for used cars on the internet. Hopefully it will last her another year. 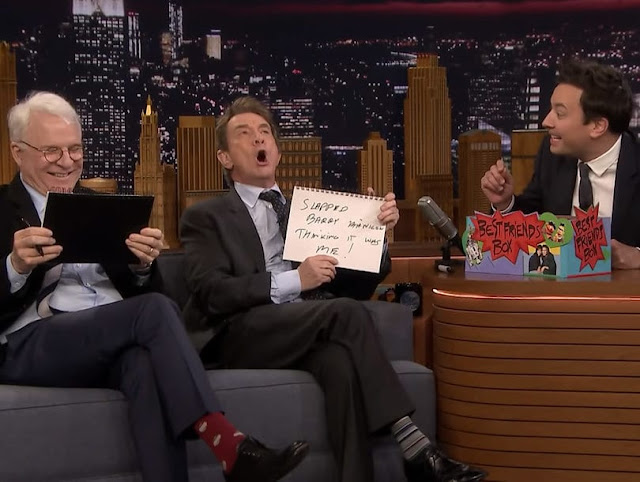 Watched The Tonight Show with Jimmy Fallon. He made a joke about E-sports. Martin Short and Steve Martin were on the show, and they killed. They have a Netflix special coming on soon. I checked their tour and the closest they come to Atlanta is Birmingham in November, and that show is almost sold out.

Socks are my new thing. I ordered some from Amazon as well, and they came quick. Thick black basketball socks. I wore my snazzy Masters socks to the wedding last week. Also have my Braves socks, Hawks socks, some blue striped socks, and the Kevin Durant socks Lang gave me. Martin Short and Steve Martin were wearing snazzy socks on The Tonight Show last week. Steve's were red.

We've had credit card fraud 2 or 3 times in the past year. Luckily the company will call or text if they think there's suspicious activity. Happened right before my surgery in February, which was inconvenient. In March when I ordered something from China the credit card company asked about the charge, but I said it was ok.

Our fridge was filled with leftovers. Something from Chipotle. Grilled chicken over tomato sauce and noodles. Chinese. Whole Foods chicken. Friday night Ceil ordered PaPa John's pizza. Saturday night M went out and brought back tater tots covered in cheese and chives. I brought a bunch for breakfast and lunch today.