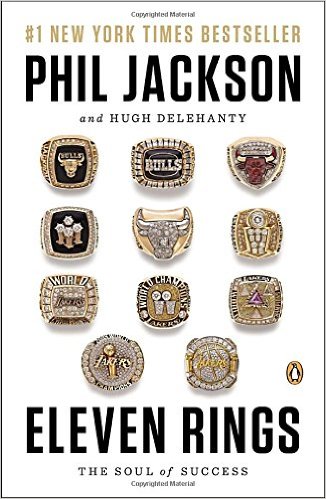 During their last championship run the Bulls lost two late season games, leaving their season total of 69 tied for the second-most in history. Jackson called a team meeting and asked the players and coaches to write down something to share. Jordan wrote a poem. A trainer read I Corinthians 13. After each player read what they had written, the paper was stuffed in a coffee can. When they were finished Jackson set the papers on fire.

The meeting steeled the team for their final playoff run. After MJ's late heroics in game seven of the finals, GM Jerry Krause refused to bring back Jackson, Jordan, Pippen, and Rodman, wanting instead to re-build the Bulls on his own. It didn't work. 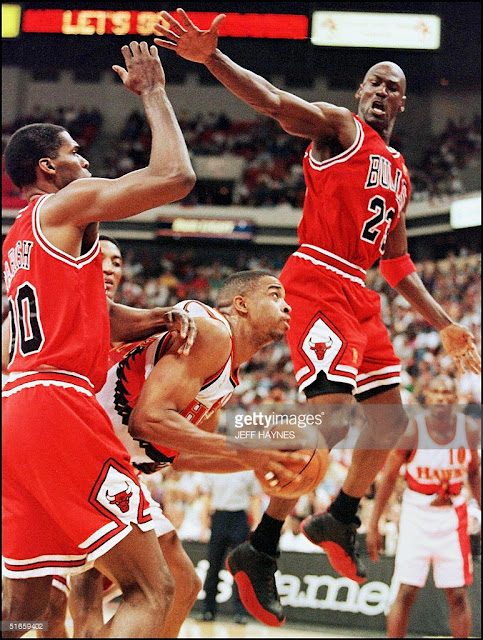 Two players I'd forgotten had played for the Bulls: Robert Parrish (above) and John "Spider" Salley (below). 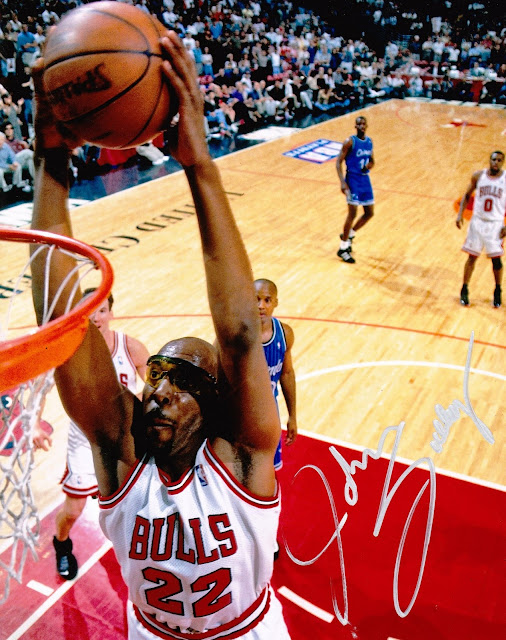 Phil learned he'd been named head coach of the Los Angeles Lakers by a small Inuit Eskimo boy in northern Alaska. Phil was on a fishing trip with his two sons when they encountered the boy in a small village. The boy asked "Are you Phil Jackson?" When Phil answered "Yes - why do you ask?" the boy said "You've just been named coach of the Lakers."

"How do you know that?" asked Phil. "We have a dish. It was on ESPN" was the reply. Before leaving on the trip Jackson had given his agent permission to negotiate with the Lakers. When driving from his home in Montana to his new job in Los Angeles, Jackson listened to a mix tape his daughter had compiled with songs about starting over. He had to pull over while listening to Willie Nelson's version of "Amazing Grace" - to cry. Throughout his book Jackson tells stories of how he used Bible verses to communicate with players, but just as often illustrates with Buddhist practices, Zen meditation, and Lakota Indian tribal warrior analogies. Jackson was a proponent of Zen quotes, like "before enlightenment: carry water, chop wood. After enlightenment: carry water, chop wood."

http://lifehacker.com/four-confusing-zen-quotes-and-what-you-can-learn-from-1676177538
Once Laker Robert Horry missed Jackson's play call. Knowing Horry had grown up in a Christian home, Phil quoted John 10:27: "My sheep hear my voice, and I know them, and they follow me."  Horry understood, but John Salley asked Jackson to explain. After that when Jackson called the team together in practice the players would respond "Yes, Master." 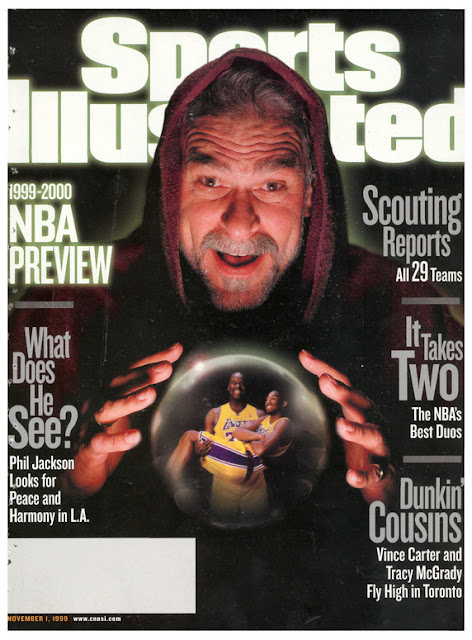 Most chapters quoted passages from books on religion or leadership. Jackson also wrote of his annual practice of giving various books to players, often at the onset of a long road trip. John Paxson received Zen and the Art of Motorcycle Maintenance. Neither Jordan nor Kobe showed much interest in the books, though nowadays Bryant asks Phil for book recommendations, particularly about leadership. Once Shaq turned in a book report in to Phil.

Phil pulled no punches in his description of young Kobe. When Jackson took over the Lakers, Kobe was young and immature and selfish. Tex Winter installed the same triangle offense the Bulls had used to win their six world championships. The players were excited to go back to the fundamentals, but it took all year for Kobe and Shaq to mesh. Phil named veterans Shaq and newcomer Ron Harper team captains. Kobe often bristled, thinking he should be captain. Jackson told him he couldn't be captain if nobody would follow him. The other Lakers had tired quickly of Kobe's selfish play.
Jackson often used the quotes of others to tell his story. While he directly detailed Kobe's immaturity, he used quotes from Rick Fox to compliment Bryant. Where Kobe was laser-focused on becoming the greatest basketball player ever, Shaq was only interested in having fun and collecting oversized toys. After the first championship Shaq returned 35 pounds overweight. Kobe told Jackson the triangle was boring and limited his abilities, caring more about scoring points than winning championships. He told ESPN the Magazine he trusted himself more than he trusted his teammates, driving another wedge into the team's chemistry. Later Jackson wrote how Kobe had eventually matured. Kobe could see his own immaturity in his two young daughters, who wanted everything their own way.
Again it took most of the season for the Lakers to play together as a team. After flying back to LA to tend to his ailing wife, Kobe staged what Jackson called a "righteous" return. LA stormed through the playoffs and beat Allen Iverson's 76ers in the Finals. After winning two championships, the players though they knew better than the coaches how to win a third. 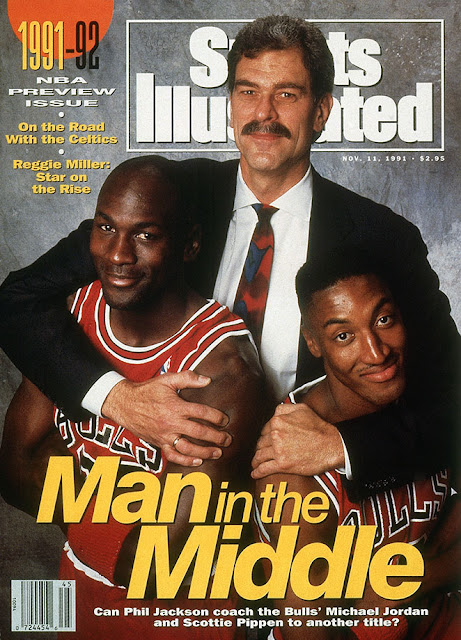 Phil Jackson devoted several paragraphs to a comparison of Michael Jordan to Kobe. They have their differences. Jordan was a better shooter, hitting almost 50% for his career. Kobe only shot 45% from the field, but Kobe could go on longer hot streaks. The main difference between the two, in Jackson’s opinion, was that Jordan was a better leader than Kobe.

Recently I compared MJ and KB statistically. MJ’s stats are superior, though Kobe scored more total points. Why? Kobe skipped college and went straight to the NBA. Add three years of points to MJ’s total (or four years to Kareem’s) and the record books would look quite different.
Lakers owner Jerry Buss loved Kobe. Buss wasn’t crazy about Shaq, and didn’t want to pay the aging superstar. The owner approved of the Shaq to Miami trade even though Jackson told him it would cost the Lakers a championship. During the season Buss told Kobe that Jackson wouldn’t be returning. Kobe told Buss that he didn’t care. Jackson found out when he overheard Kobe telling a teammate on the team bus.
The Lakers dropped under .500 without Shaq, Jackson, Karl Malone, and Ron Harper. In his second year in Miami, Shaq won a championship. New head coach Rudy Tomjanovich was fighting cancer and didn’t last the entire season. Jeanie Buss tracked down Jackson, on vacation in Australia, and offered him the job again. Phil had other offers, including the Knicks, but chose the Lakers for the challenge of developing a young team. After his hip replacement Jackson had to change from a standing coach to a sitting coach. This worked well with his young team, who needed a teaching father figure more than a drill sergeant.
With few offensive options Bryant went on a scoring spree, reaching 50 in five games in a stretch of seven. This is when he had his 81 point game. The Lakers made the playoffs. When they lost, Kobe demanded a trade or an improved starting cast (this after running off Shaq). The Lakers tried to trade for Kevin Garnett, who instead chose Boston because of Kobe’s numerous outbursts in the press.