Saturday morning our group ringleader called, organizing the group dinner. Met two couples in bustling downtown Woodstock for dinner at the Century House Tavern, located in an old house. Since we were going to downtown Woodstock I mentioned we should go early, since I knew that place could get crowded. After she hung up I realized it was St. Patrick’s Day. It would be more crowded than usual. Then later the ringleader’s husband called, wanting us to go early and stake out the table for six. What could I say but yes? The rest of the day I worried about it, that something would go wrong. It was saving seats in church all over again.

I hate being in a big group trying to get seated at a crowded restaurant. Puts a strain on the waiters. It’s almost impossible to get twelve orders and drink orders right, especially when 2/3 of the party give special instructions. At least when we go to Bonefish at the beach every year we go late on in the evening and make a reservation in advance, so they’re expecting us.

It freaks me out when I’m in charge of something I can’t control. I want things to go right. That’s why I’m so good at my job. Then they took too long getting the oil changed and car washed and detailed, so we were 30 minutes late getting to the restaurant. More worry the whole drive over.

Luckily the ringleaders beat us there and secured the table (and got the last parking space). Everything turned out well, but it took me 15 minutes to calm down and enjoy the evening. A table of six splitting three meals is much easier than party of twelve. Afterward we walked around the downtown.

Then there’s coworker John who’s been here for about a year now. He’s really edging in on my turf. Looks a little like Kevin Bacon, which is his nickname. He’s learned the complicated work order system well. He gets along well with everyone and tells good jokes. But now he’s gotten new glasses, and I think he’s trying to become the next Dave Murphy. The last straw was when I went home he was there sitting in my spot on the couch.

Saturday night the third couple at the restaurant were Reid and Noelle. I knew Reid was looking for new glasses, and Saturday he showed up with his new frames – very similar to my new glasses. I’ve had mine for almost two months now and haven’t decided fully that I love them yet, but I guess if everyone else likes them so much that they’re gonna copy me, I guess I should be flattered huh. It’s getting to be an everyday thing.

Basketball basketball basketball. Spaghetti for supper Friday night. I went to bed before Virginia got beat. Since most everyone picked UVA to go deep in the tourney, most everyone is in the same boat. Last year a guy on Twitter reminded everyone of that, and this year he repeated that mantra after Arizona lost. I wanted to say the same thing after the UVA lost, and in my haste didn’t figure out a way to attribute the post to him. Later he busted me for it, and I had to apologize.

Housework and laundry on Saturday. Ceil painted the bedroom. Later I cleaned out M’s car and took it to get the oil changed. Also ripped out the cloth hanging down from the room, so you can see a lot better. The carwash changed the oil and cleaned it up good.

Sunday: JFBC, then Whole Foods on the way home, then a nap. Watched the exciting back nine. Tiger (the Masters favorite) couldn’t close the deal, missing the fairway on the last three holes. Rory (my Masters favorite) birdied five of the last six to win going away. Bryson DeChambeau, who we saw at the Masters, also played well. After the tourney Rory, Bryson, and Ricky Fowler all told heartfelt Arnold Palmer stories. 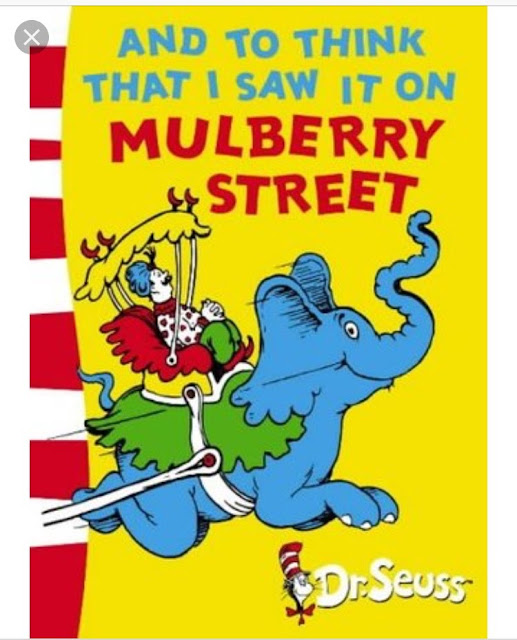 Today at work the conversation meandered to Dr. Seuss’s classic book “And to Think that I Saw it on Mulberry Street.” I looked it up on Amazon and read part of it to my coworkers. An excellent book I was read to my grandchildren. Also “The 500 Hats of Bartholomew Cubbins.”

Buddy the Elf had a way with the ladies: “I think you’re really beautiful and I feel really warm when I am around you and my tongue swells up. So…do you wanna eat food?”

Gonna watch the UGA women tonight? My old roomie Leuze lives in Louisville and goes to a lot of women’s games there.

What happened to Lorelai’s Jeep? https://www.autotrader.com/car-news/heres-what-happened-to-the-gilmore-girls-jeep-wrangler-255920