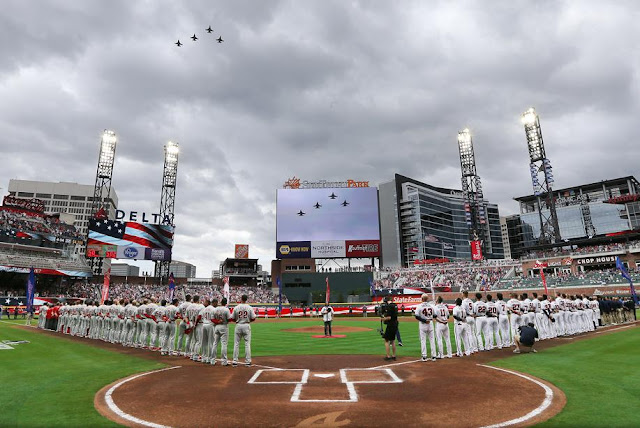 Nice comeback by the Braves – in fact the biggest opening day comeback in Braves history. Interesting post-walkoff interview of Nick Markakis, who was doing his best not to be over-exited. Similar to his at bat, when in his excitement overswung at an early pitch. He told himself to relax and get his bat on the ball, and it worked. Critical error by the rookie Phillies manager, taking out his best pitcher after only 68 pitches, with a shutout going. Conversely, longtime baseball man Brian Snitker didn’t leave hard-throwing Braves reliever Stoneman in the game when he started walking people.

In his previous at bat Markakis struck out with two runners on base, and on social media the all-knowing critics came out, claiming Markakis should’ve bunted to take advantage of the shift employed by the Phillies. That by not doing so the Braves weren’t playing to win. Bunting would’ve played right into the Philly strategy, taking the bat out of one of the Braves best hitters. Had Markakis bunted in the ninth inning the Braves probably would’ve lost. 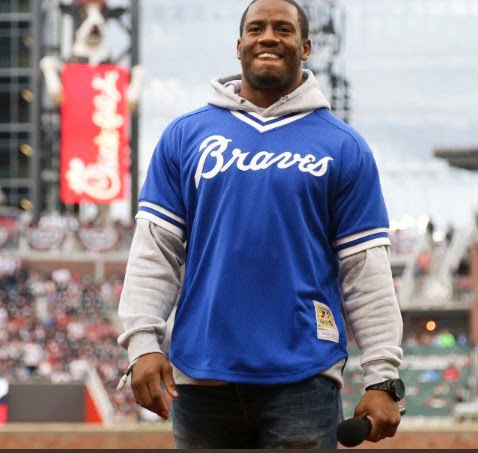 Worked past 6:15 and made two stops on the way home. Got caught in the rain. Naturally drivers started driving even crazier. Had to swap out cars with M at Whole foods, and get his jacket out of his car – more trips in the rain. Got home and realized I still had the keys to my car, so I had to go back. More rain. Didn’t get home for good until almost ten. Watched the replay of the Braves game, and a little of the Indians/Mariners, with Ichiro making his return to Seattle. David Ross was calling that game.
In honor of Opening Day people could wear their Braves stuff to work Thursday. I should’ve worn a jersey, since this other “old” guy is always wearing nice football jerseys on similar days. Most people wear Braves t-shirts if they have them. Instead I wore a white dress shirt and my blue Braves tie (below). Classy, huh? Later we’re having peanuts and Cracker Jack. Actually so far I’ve only seen four Braves shirts: a Chipper, Swanson, Braves, and Dale Murphy. 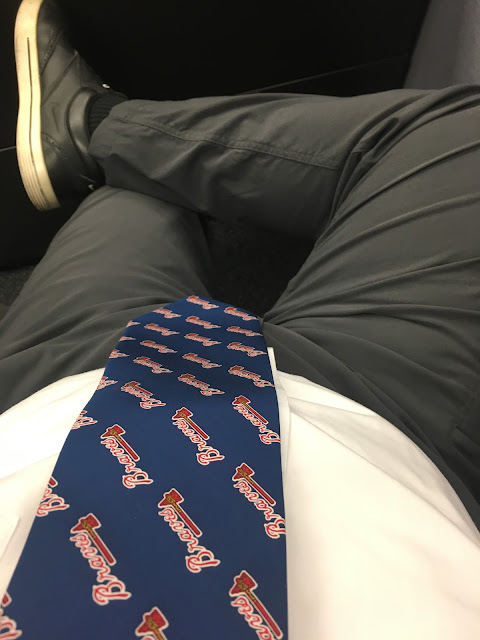 Tuesday Ceil cooked a roast with mushrooms and onions. She had wanted to watch The Middle, but Roseanne came on instead. Later we watched Chicago Med.

Worked past six Wednesday night. Ceil cooked chili, which I will have for lunch today and tomorrow. Watched The Voice, Modern Family, and Designated Survivor.

Thursday: finally got my email working again. I keep the emails that I want/need to keep in my sent folder. For a long time I only had 600-800 in there and would clean it out when it got over 900. But in the past year my sent folder ballooned to over 1400. Then yesterday I somehow deleted all 1400 emails, which went into my deleted items folder with the 200 emails I had received and deleted on Tuesday and Wednesday.

I spent a good portion of Wednesday deleting emails from several folders, getting rid of well over 100 MB of emails. But still I could receive emails but not send. This morning nothing had changed. The Help Desk had showed me where to look, and I noticed a large amount in a “sent deleted” folder. Knowing my deleted folder was empty, I finally got rid of the sent deleted items – a duplicate of the 1600 emails I had previously deleted. Now my system is all cleaned out, so I should be good for a few months.

Holeman & Finch - I never knew it was there near Peachtree Creek. I’ll have to look for it during this year’s Peachtree Road Race. Usually at that point I’m on the other side of the street at the water station.

Good Friday: I have to work. I checked looking for an evening Good Friday service but couldn’t find one. I think Passion Church has a big service at the amphitheater in Alpharetta. There might be a trucking company not working. That’s what someone thought when the trucking company didn’t answer their phone. But that guy NEVER answers his phone. I have better luck texting him.

A scattered Easter for us. Will, MC, Anna, and Matthew all have to work. Ceil is in SC. I’ll go to Macon. Ceil’s school is off next week so she is waiting until Monday to come home. Mary-Clayton scored practice round tickets for Monday afternoon, so she and Ceil are going. It will be Ceil’s first trip to the Masters.

Ephesians 4:14 is especially relevant in these days of fake news: “So we may no longer be children, tossed to and fro by the waves and carried about by every wind of doctrine, by human cunning, by craftiness in deceitful schemes.”