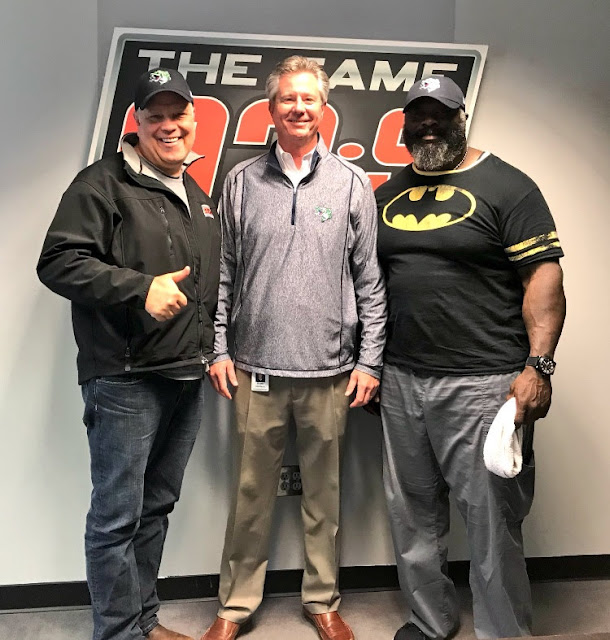 Interesting hot stove meeting last night at Johnny’s baseball museum in Cumming. Gwinnett Stripers GM North Johnson was the featured speaker, a real catch of a guest (pardon the pun). It was funny to see Johnny taking a long time with his opening comments, then first giving the floor to another first time guest, former Richmond Brave pitcher Monk Jones. Big Monk had starring for Roswell High during their glory days in the early 70’s. After two years in college the Braves drafted Jones, and he slowly moved up the ladder. He was coached by Bobby Dews and later managed by Tommie Aaron in 1977. He was one time a teammate of Dale Murphy. Now he runs Monk’s Painting, serving both commercial and residential customers.

Johnson finally got his turn. Earlier in the day he appeared on a radio show (above). He was asked to tell his story, something he rarely get to talk about. After his sophomore year in college in his hometown Lynchburg (Elon College), North spent the summer working for his high school basketball coach – the new GM of the local minor league team. At the end of the season as he prepared to return to school, team management took North to lunch and offered him a full time job. His father encouraged him to pursue something he loved, and he’s been doing it ever since – 40 years in the minor leagues.

The journey took him to various locations. He cherished his time in Lynchburg, the team an affiliate of the Mets. The players that came through included Dwight Gooden, Roger McDowell, Howard Johnson, and Lenny Dykstra. In Pittsfield he got to watch scrawny 21 year old Greg Maddux mow down batters for half a season. Maddux got called up to AAA and the big leagues that same year.

At one point North moved his family across the country to Southern California, to be the GM of the Rancho Cucamonga Quakes, then an affiliate of the Angels. The weather was great, and they were situated 45 minutes south of Dodger Stadium and 45 minutes north of Anaheim Stadium (and Disneyland). His wife would make sweet tea for the boys from the South, since the restaurants didn’t serve it. He joked that they stayed 3 years, which was 2-1/2 years too long.

Eventually he wound up in Myrtle Beach, another place they liked. He was there when Jason Heyward and Freddie Freeman were there. He like Single A and Double A because the players were young and not yet entitled, still hungry both physically and emotionally. Said he always looked out for the kid who looked hungry or lonely and invite them out for lunch or dinner. North said it made a world of difference for the youngsters. He quoted Buck Showalter, who said the toughest job in baseball is the manager of a AAA team: half the players are made because they got sent down, and the other half are mad because they hadn’t been called up yet. Plus some players are making the minimum, then a veteran comes in making a million a year. Johnson defended AAA players who might not spend as much time signing autographs, as many of them have young families they haven’t seen all day.

When the Braves moved their AAA team from Richmond to Gwinnett, most of the front office staff moved south for the first year, then drifted off to other jobs back in Virginia or elsewhere. Johnson got a call from Braves VP Mike Plant for an interview, and a day later he was hired. Later I realized North was dressed a lot like the Atlanta Braves executives dress: crisp slacks, nice loafers, dress shirt or golf shirt, and team logo golf pullover.

Like most teams these days, the Braves own most of their minor league teams (all but one) so they can make sure things are being run their way. Until a few months ago Gwinnett was the only AAA team located so close to their parent club, with the same name as their parent club. Gwinnett has the smallest marketing budget in the International League but is located in the market with the highest advertising costs – a double whammy. Experts say Gwinnett is at best a AA market. That said, North wasn’t complaining. 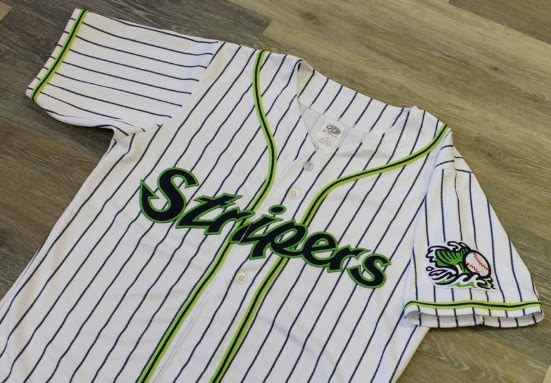 Johnson addressed the name change, saying the team – last in the league in attendance – desperately needed its own identity. He said the (true) story of people trying to use Gwinnett tickets at Turner Field wasn’t the main reason for the change (though social media blew the story out of proportion). Jerry’s son piped up and told the story of his middle school chorus preparing to sing the national anthem at Gwinnett, only to have a student’s mother call, unable to locate the group – she was at SunTrust Park. This year the Stripers have additional one time costs to change out all the old Gwinnett Braves signage in the stadium. This weekend they’re selling off chairs and other items.

Since the Braves control the roster and coaches, North is “only” responsible for filling the seats, promoting the team, and making sure they don’t go over budget. The training table was discussed: nowadays nutrition is such a buzzword. This year all the Braves minor league teams food budget increased from $250-300 per game to $700, with stipulations for only the best grade of beef and chicken. The menu must be varied, as Hispanic players who grew up eating rice and beans would experience digestive problems if they quickly changed their diet. Since most road trips would be over ten hours by bus, the Stripers fly on most road trips. Players receive a $25 per deim, but out of that comes money for the clubhouse spread. The best clubhouse food in the International League is found in Louisville.

North had no beef with former Braves GM John Coppolella, who always treated him well. Coppy treated the Braves minor league like a fantasy league, but all the maneuvering put a strain on the organization, players, and their families. A player would get hit by a ball, and without waiting a day or two to see how bad the injury was Coppy would call someone up from Gwinnett, resulting in a callup from Pearl, resulting in a callup from Rome, and so forth. Then the next day when the player would be ok and all the moves would go back in reverse. Normally a team like Gwinnett would have about 45 players come and go during an average season. Last year 85 players went through the revolving clubhouse doors.

One day Chipper watched young Ozzie Albies take batting practice. Jones pointed out a hole in Albies’ left-handed swing that major league pitchers could easily exploit. Ozzie was placed on the disabled list with a mysterious toe ailment while Chipper and others worked with Albies to correct the problem in the underground hitting cages.

He agreed with a comment that Dansby may have been rushed to the majors. Said if Acuna keeps hitting he won’t be long for the minors. Said you could look at the schedule and figure out when he could be called up. He’s gotta stay in the minors for something like 13 days, so he would be called up probably after the Braves come home from Chicago on April 16.

All this prospect talk led Johnny to provide an update on Forsyth county high school hurler Ethan Hankins, a projected top three pick in the upcoming amateur draft. Hankins’ father is in prison and his mother wants him to forgo a Vanderbilt scholarship to cash in on a pro contract. In one game while batting a called strike caused Hankins to curse the umpire. Later he hit a home run and performed a hand stand to celebrate, bringing jeers from the stands – resulting in another f-bomb from Hankins. In his next start Hankins’ shoulder came up sore. The kid is still growing, by some reports to 6’8” with a fastball unofficially clocked at 100 mph. 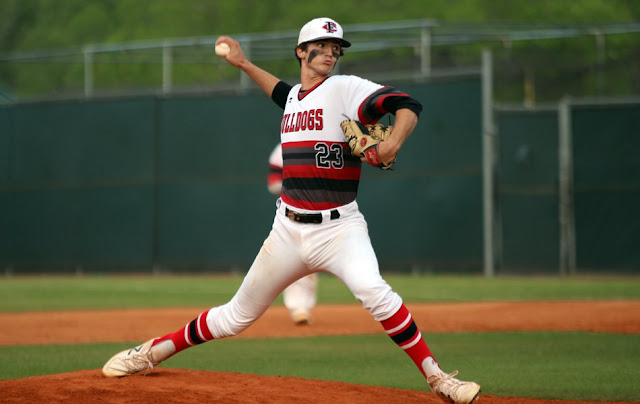 Johnson handed out his cool business cards, in the shape of the Stripers logo. He brought a cap, which was given to the only female attendee: lawyer/writer Howard’s friend Arlene. North had a stack of pocket schedules – and ten pairs of anytime tickets (a $34 value). Johnny made sure I got a pair. Score!