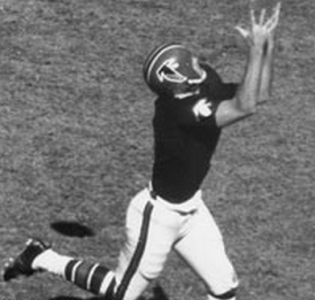 Any Falcon who played without a facemask would be something, wouldn't he? Only one did - Pro Football Hall of Famer Tommy McDonald was one of the expansion team’s leading receivers. His storybook career, combined with the lack of any other standout number eight, makes McDonald the greatest Falcon to wear the number.

Kenny Vinyard was another much-maligned kicker in the early days.

Tech: QB Damarius Bilbo was a bust. WR Demarius Thomas was up and down at Tech, accepting clothing money that cost the Jackets their ACC Championship. In Denver Peyton Manning finally taught him how to act like a grown up. 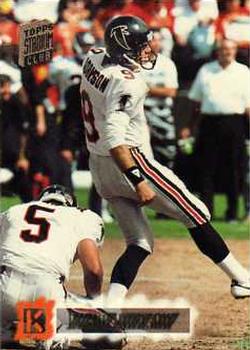 Norm Johnson kicked in Atlanta four years. He played the first part of his career in Seattle. The greatest number nine by default.

Michael Koenen played for the Falcons six years. It was his punt that was blocked early in the first game back in the Superdome, setting the tone for the Saints blowout. Wingback Larry Fortner played one season.

Tech: Future Falcon H back Ken Whisenhunt quarterbacked the Jackets to an upset tie over number one ranked Notre Dame as a freshman, before moving to tight end. Kerry Watkins was a dynamic receiver. Josh Nesbitt was loved by many. QB Rudy Allen passed out of Pepper Rodgers’ wishbone. Scott Sisson’s kicks were crucial to the 1990 national championship.