Falcons by the Numbers: # 1

The Falcoholic blog on SB Nation is naming the best Falcon by uniform number. Written by a young man named Kendall Jackson, he writes as if nothing important happened before he was born. His first few efforts at naming the greatest Falcon by number has been so abysmal that I’m just going to help him out. I’ll provide my own analysis for each number and post my opinion as a comment on his blog.

Randy Johnson was the Falcons’ first starting quarterback. No mention that he was the first number one draft pick (along with Tommy Nobis). Some readers confused the Falcon QB with the HOF pitcher. No mention of Pat Sullivan. He didn’t have much of an impact with the Falcons but was a Heisman Trophy winner from nearby Auburn.

I cannot find where I have listed the best Falcons by number in the past. I’ve completed Tech, UGA, and the Braves. I’ll have to add the Hawks as well.

GREATEST ATLANTA FALCON BY NUMBER:
ONE: Jackson picked Jeff George as the best number one - his first mistake. Any QB arrogant enough to don the number one jersey has to be a jerk, and George proved this again and again. How many NFL players get into a fight on the sidelines with their own head coach? Surely it’s tough to rankle the feathers of the mild-mannered June Jones, a born again Christian – yet George did. Though talented, Jeff George does not deserve the honor of making this list. 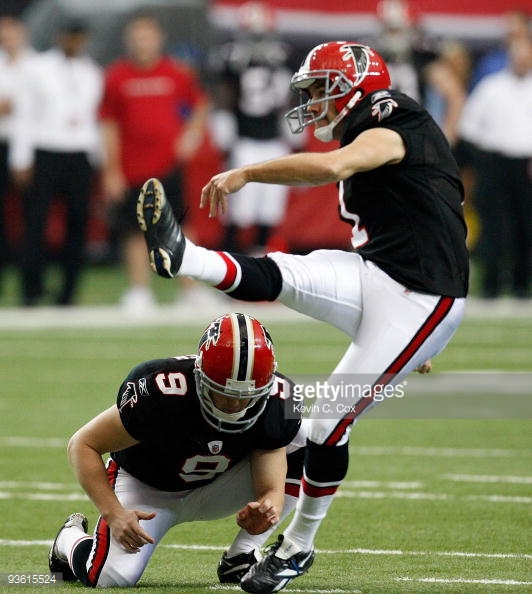 Jason Elam, the greatest long-distance kicker in NFL history, is a much more deserving choice as the finest to wear number one. Elam kicked for his hometown Falcons at the end of his career, while he still had plenty of leg left in the tank. Jason was one of a long line of kickers who grew up in metro Atlanta. After matriculating to the University of Hawaii and kicking in the thin air of Denver for many years, Elam finally returned to Atlanta. While at Denver Elam tied Tom Dempsey’s record for the longest field goal in NFL history. And he never got into a sideline fight with his head coach.

Some will disagree and point out a specific kick Elam missed or slump he suffered, but it’s hard to argue that his overall body of work clearly outshines George.
Honorable Mention: Fred Steinfort holds the distinction as the first ever soccer-style kicker to play for the Falcons. Matt Prater had a cup of coffee in Atlanta before being replaced by Morten Andersen - then going on to break Elam's record for the longest field goal in NFL history, in Denver.

Comment: I detest the number one. It screams selfishness and arrogance. “It’s all about me!” I wish every team would retire the number.