Back in the day DB/WR/KR Tom McCauley was one of my favorites. His twisting, snaking 77 yard punt return for a touchdown was legendary. Not a break-through-one-wall-of-tacklers-into-an-open-field type return – McCauley snaked his way from one side of the field to the other, avoiding tacklers the entire way. A tall, lean, fast white boy (above and below). 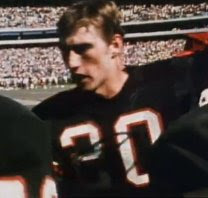