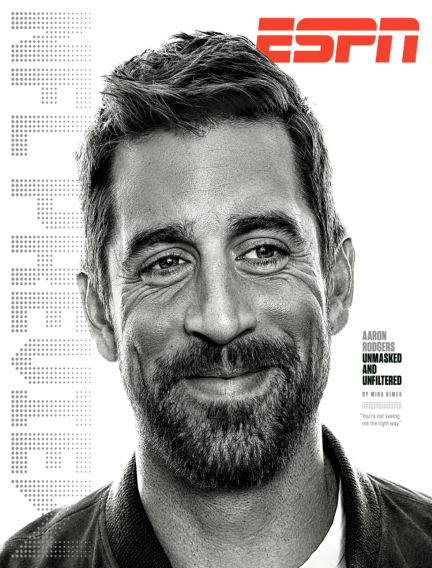 Interesting article in ESPN the Magazine about Aaron Rodgers. His parents were devout Christians, and for a while he was as well. Now he says “I think organized religion can have a mind-debilitating effect, because there in an exclusivity that can shut you out from being open to the world, to people, and energy, and love and acceptance…I was, you know, more black and white. This is what I believe in. And then at some point…you realize, I don’t really know the answers to all the questions”
What Rodgers says may be true, but the secret isn’t organized religion or knowing all the answers. Instead what’s needed is a personal relationship and faith in Jesus. It’s hard to break free to relate to other people, to love and accept as Christ did. To roll up your sleeves and get involved. Some never do. It’s sure hard for me.

Rodgers references a book detailing violent acts committed over the years, all supposedly in the name of Christianity. Again, so many get “religion” wrong, just as people misunderstand relationships, politics, and so many other areas of life. As a young person the QB may have received a theologically incomplete answer to what happens to people who’ve never heard the gospel. Is anyone short of heaven completely sure of the answer to that question? Is an answer needed before someone can decide what their relationship with God will be? No one will ever know all the answers.

So often people’s relationship with God is influenced by key individuals (both Christian or non-Christian) at a defining moment in the person’s life. Several years ago Rodgers spent time with a young progressive pastor named Rob Bell, who influenced Rodgers’ (and thousands of others) on what Christianity is. While there may be some truth in Bell’s teaching and beliefs, some obviously strays from what’s written in the Bible. Bell’s book “Love Wins” has been criticized by Albert Mohler, John Piper, and SBC International Mission Board president David Platt.  https://en.wikipedia.org/wiki/Rob_Bell

Seems like the smarter a person is, the more they question things. Nothing wrong with that, as long as their search is open and thorough. I am far from a perfect Christian, but this is my response to Rodgers.

I do like Aaron Rodgers, and the way he comports himself. One of my favorite football players. He’s trying to be the best Aaron Rodgers, not trying to be anything he’s not. Jeopardy champion. Discount double check. Interesting that a kid from northern California playing in Green Bay would spend off-seasons in Los Angeles (though Tom Brady does the same thing). There have been reports that Rodgers is estranged from his family. Hope it’s not because he’s wandered from their faith.

Many people who deny God’s existence on social media often show their ignorance in their comments. Some ask why a loving God would allow such human suffering on earth, never taking time to read/learn/think through how earth is a fallen place. Forgotten is the free will God allows, knowing that demanding love and obedience could never be genuine. Instead people are able to choose their behaviors good and bad, which can impact others. Would people rather be a bunch of robots? I think not.

Sometimes I read comments just to see the reactions. To me there’s no greater sign of God’s creation then the metamorphosis of a caterpillar into a butterfly. As the caterpillar spins its cocoon, its head splits open and it eats and digests itself. The cocoon is filled with goo - the caterpillar is gone. The butterfly is created from the goo. How could this process have been created apart from God? If this were evolution there would be no more caterpillars. Yet unbelievers still don’t see God in this, refusing to do the research that would negate their argument. Their mind is closed.

Did I ever tell you about the time around 1980 when Ron Watts was living in the Giles house in Smyrna, near Campbell High School? The Giles were serving as missionaries (I think). Ron lived there with Steve Giles and David Hurt (I think). One time Ron was reading on his bed. Hurt popped his head into the doorway to ask him a question. Ron clammered around like he was doing something he wasn’t supposed to be doing. Hurt went over to see what he was reading. Ron had been covering up a Popular Mechanics magazine.

Repairs, we have an insurance adjuster coming out. Some shingles blew off during the hurricane, causing a leak that damaged a ceiling.

Tuesday: Ceil cooked roast beef, mashed potatoes, and salad for supper. I had picked up the potatoes on the way home. Ceil might have strep throat. We watched some of the game. Also The Middle, The Voice, blackish, and The Mayor. I went to bed at ten. C stayed up to watch Kevin Saves the World.

Wednesday: Ceil’s been sick. Later I went out to Kroger for medicine. M cooked a buffalo chicken pizza. Stayed up to watch Designated Survivor.

A former coworker called in today. She’s been gone over ten years – Yung Rinnert Murphy. A real fun troublemaker. The type those who followed in her footsteps had big shoes to fill, as Emily Blunt said at the end of The Devil Wears Prada.

Back when I was single for some reason on Wednesdays I would leave work at 5 pm, drive home, eat supper, change clothes, and then go to the SPdL fellowship hall. Not like I wore a suit or anything. Didn’t know why all the men in suits didn’t change before coming. Not sure when I figured out how much easier to would be to come straight from work.