Dawgs Up Clemson Down 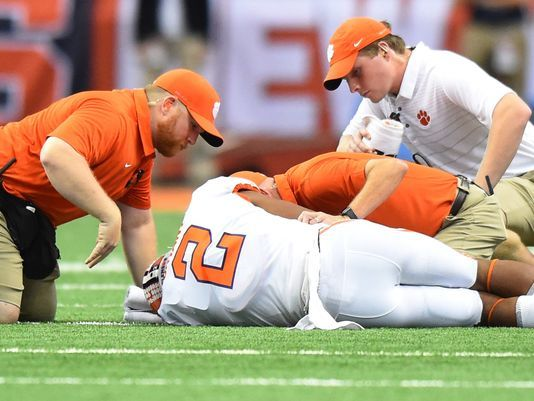 Dabo often tells his team that the only one who could beat Clemson is Clemson. That’s exactly what happened. Dabo said he didn’t regret starting the injured Kelly Bryant. That’s what he had to say. Starting Bryant was a mistake. Leaving him in was a mistake. Now Bryant has a bad ankle and a concussion. But that wasn’t the only way Clemson beat themselves. Stupid penalties. Unsportsmanlike conduct. Missed field goals. Botched fake punt (below). And on and on. 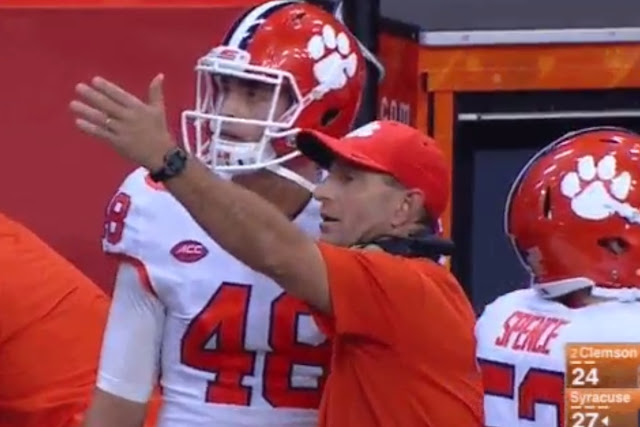 Some fans were upset that Dabo went into the Syracuse locker room to congratulate the victors. But that’s who Dabo is. Don’t like it? Want to get another coach? I didn’t think so. I wasn’t a fan of the move either. To me that’s thinking too highly of yourself, saying “I’m great. I’m big stuff. Congrats on beating such a great team.” For Clemson to get beat by Syracuse means the Tigers need to look at themselves. Not doing so could mean more losses down the road. Like the wolf in Little Red Riding Hood, NC State is licking their chops. 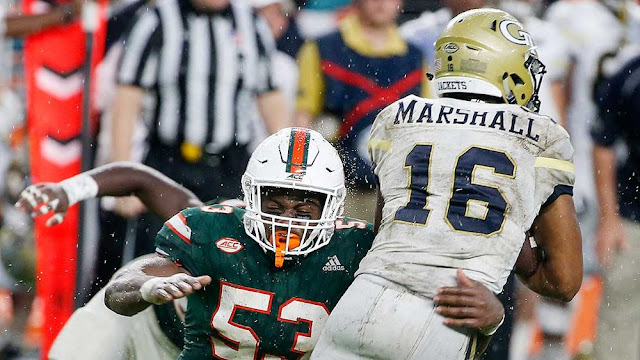 Tech lost by a point. Their offense went cold. So did the defense. Might’ve had the big head. Another running back got hurt. Miami took away the middle, but as usual Johnson made the adjustment, finding success on the corners. Tech needed a return of a botched onside kick to stay in the game. Tech did not score after that TD return on the first play of the second half. Tech’s most surehanded receiver dropped the crucial fourth down pass – a tough catch to be sure. Then Miami drove the field, running their successful bubble screen left over and over – six times in a row, reeling off first down after first down while stopping the clock. Then a converted fourth down catch off a tipped pass, setting up the game winning field goal. 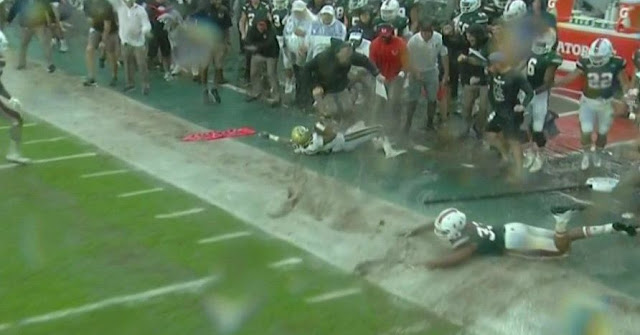 Nimble move by Mark Richt to hop over the sliding Tuquan Marshall on the sidelines. As usual, the new goateed former Georgia coach was humble in victory. “Another day in paradise” “Tech played well enough to win” and “this is how we roll.” Poor Tech could be, should be undefeated. Let the Tennessee game get away, then Miami. Instead of being able to sneak up on an undefeated Clemson team, the Jackets will face the full wrath of a Tigers team anxious to reclaim its swagger.

For some reason Tech’s freshman punting sensation Pressley Harvin III changed his punting style, opting a running to the right rugby-style instead of the more traditional approach he’d been relying on. His first punt was a line drive that Miami was able to return, putting them into scoring position. Later Harvin went back to his traditional style, and again boomed his punt.
Tech gives a scholarship to a punter, which yields immediate benefits. They need to give a scholarship to a kicker. Johnson went for it on 4th and six instead of attempting a 44 yard field goal because the special teams coach told Johnson “he couldn’t kick it that far.” Not good. Perhaps that’s why Johnson sent in the backup kicker, who split the uprights from a shorter distance. 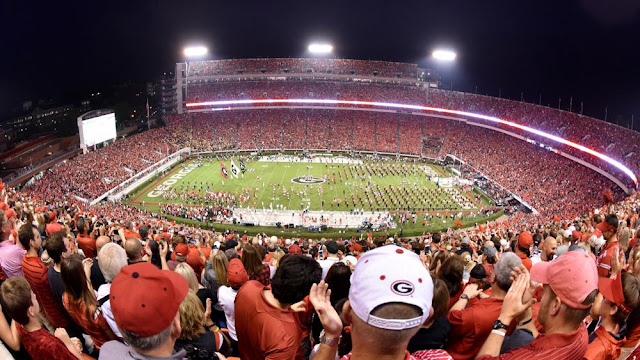 The Dawgs gave fans something to worry about, giving up two bombs to pass happy Missouri. That’s about all they got. Good to reveal the weak link now than against a tougher team. OC Jim Chaney became pass happy himself, showing future opponents that Jake Fromm could do more than just hand off. The freshman Fromm was hitting receivers in the hands far downfield. Hopefully the bye week will give Godwin’s bruised ribs time to heal. He will be needed against the Gators. 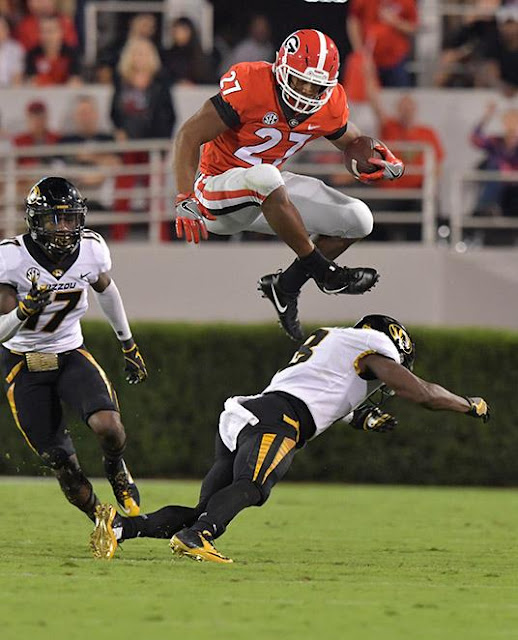 To no one’s surprise (except Ricky Glover) freshman Swift had another big game. Holyfield was the only Dawg wearing white socks. Not sure what was up with that. Both Swift and Holyfield helped set a Sanford Stadium record for total offense against an SEC opponent. 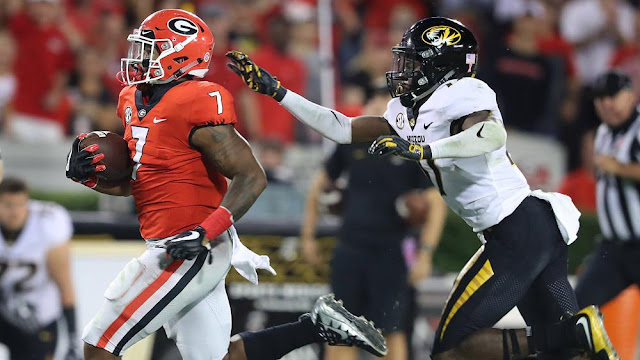 Rodrigo Blankenship came into Saturday ranked second in field goal percentage, having made 4 of 5 for the year. Against Missouri he made all four field goals, and continued to boom kickoffs out of the end zone. Looked like the special teams strategy changed on a few of the kickoffs, as Rodrigo was asked to kick a few higher and shorter. 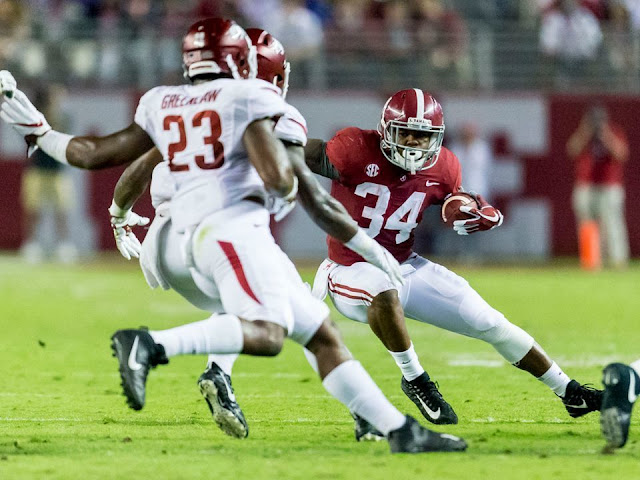 As usual, Bama rolled. They remain the team to beat.

TCU won, but has a tough schedule. Oklahoma edged Texas, but doesn’t seem to be a dominant team. Michigan struggled, and now must travel to Happy Valley to face media favorite Penn State. Some experts think the Wolverines can hold their own.
Auburn lost to resurgent LSU. With two losses, their only hope is to beat Georgia, Bama, and Georgia again.
In a game that featured almost zero offense, South Carolina edged Tennessee. Seemed like neither team wanted to win. At least both teams wore their regular uniforms. Vols haven’t scored a touchdown in two games. Wonder if those Gamecock fans still think Muschamp is a better coach than Kirby. Crazy talk. 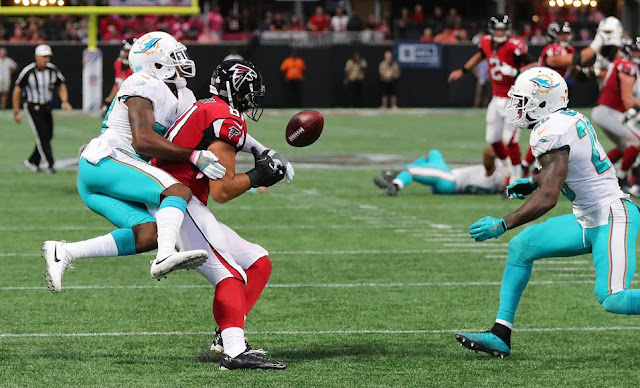 Falcons lost. Offense looked anemic. Not sure what’s the matter. Freeman reeled off 66 yards rushing in the first half but only two in the second. The defense couldn’t seem to stop the Dolphins. Fans will panic, but there’s still plenty of season left. The idea is to peak at the end. Only problem is the rest of the division all looks good.  The road doesn’t get any easier. Next up: New England, who struggled against the Jets.

Eli led the 0-5 Giants past the Broncos, but the trade rumors continue. I’m sure he’s rather end up in Green Bay than Jacksonville, thought the Jags offer the best long term prospects. Jags rookie running back Leonard Fournette has been a beast, but he tweaked an ankle against the Rams. In other Manning news: (1) Tony Dungy squashed any rumors that Peyton would come out of retirement to replace the injured Aaron Rodgers, (2) Cooper is now co-starring in a commercial with Peyton, and (3) I’m not a fan of Eli’s new tight haircut.
Deshaun Watson continues to amaze. He leads the NFL in touchdown passes, and climbed to 7th on the all-time Texans TD list after just six games. Could I have been wrong about him?  The Browns were – they passed on Deshaun and took Notre Dame’s young Deshone Kizer. It always helps to be drafted by teams with good coaches, players, and front office personnel already in place.