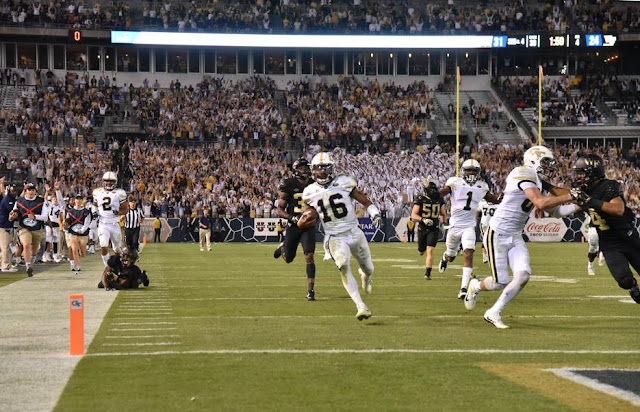 I don’t like Wake Forest, so I was glad to see Tech pull away and win. Closer than the score indicated. Tech dominated the first quarter but trailed 7-3. Got the feeling that things would work out for Tech, but then the defense couldn’t seem to stop Wake’s offense. Later Johnson admitted going for two was his mistake, as were the play calls on those conversions. Each time they lined up for the conversion I got the feeling there was no way they were going to make it. Then Johnson passed on a makeable 48 yard field goal. So Tech left five points on the field. 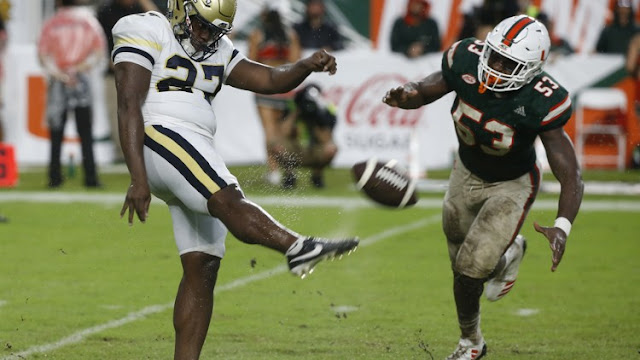 Another big game for my man Pressley Harvin III. The Big Boomer blasted a 54 yard punt to get Tech out of trouble. Harvin leads the ACC with a 45.6 average, and has yet to kick the ball into the end zone for a touchback. Not surprisingly, GT has punted fewer times than any other ACC school. Five ACC schools have punted twice as many times as Tech. 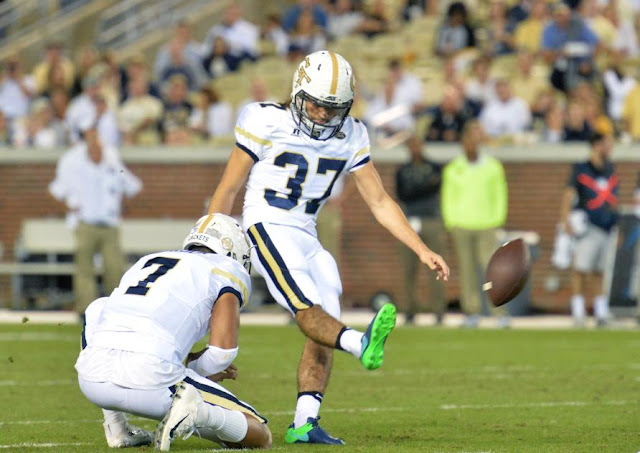 Speaking of kicking, Tech ranks last in the ACC with only 44% of kickoffs not being returned. Clemson is last in the ACC in made field goals, at only 40%. Tech is the only school with three missed extra points. Benton King (above) may improve things. Three schools have missed twice, including Clemson.

Late in the game Barney gave me the look, so I tried to take him outside quickly. Not quick enough – I missed Marshall’s long TD run that put the game out of reach (top). At least three of Tech’s touchdowns were relatively long breakaway runs for scores. Tech may have beaten Wake worse than Clemson did, but I expect Clemson will be able to run and pass and score at will against Tech’s defense. For the most part Clemson’s defense will throttle Tech’s offense. Maybe not a blowout, but after the Syracuse loss I expect Clemson to win decisively.

Late in the game the Wake Forest coach was going crazy on the sidelines, claiming Tech was guilty of pass interference and other infractions. Made me wonder if he’s shake Johnson’s hand after the game, but he did.

Don’t be surprised: if both Georgia and Notre Dame finish the season with one loss, media hype has the Irish going to the Semifinal even though the Dawgs beat Notre Dame head to head. Hopefully the committee will factor in head to head. 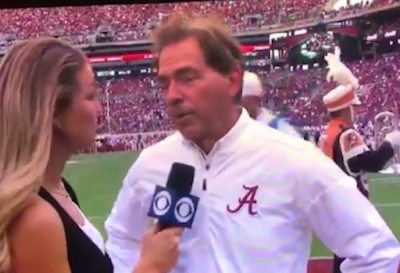 As expected Bama rolled over Tennessee. As expected Saban wasn’t happy with the 21-0 halftime score. When CBS’ Allie LaForce’s asked how he’d get his team to come out with more energy, Saban responded: “I’m gonna use all my psychological disposition that I can at halftime. I’m trying to be nice to you.”

Next week ESPN College Gameday sets up at Ohio State for their game against Penn State. ESPN loves those schools, and will lobby to get them in the playoff. Jim Harbaugh’s Michigan Wolverines have lost five of their last eleven games – just like Florida. 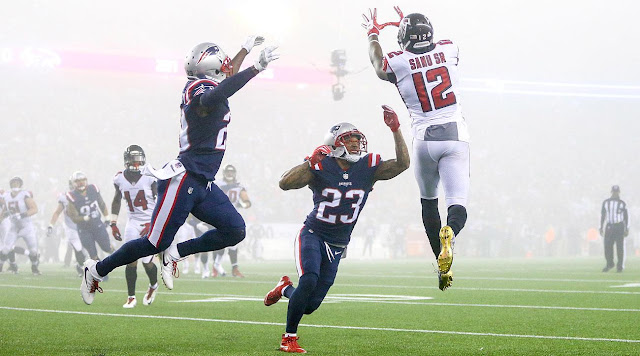 Fans are mad at the Falcons for their poor performance. I wasn’t surprised. The Birds haven’t been playing well. Even with Julio and Sanu back, there was no reason to think the Falcons would all of a sudden start playing lights out on the road at New England, on national TV. I just hope they can get things right soon enough to make the playoffs. That’s all that matters. Perhaps the Braves run of championships was a big feat after all.

This USA Today reporter knows he may be stretching the truth calling San Diego’s Drew Kaser’s 69 yard punt downed at the one yard line as the greatest punt in NFL history. He did mention Steve O’Neil’s 98 yard punt and Randall Cunningham’s 91 yarder – Herschel helped tackle the punt returner on the one yard line. 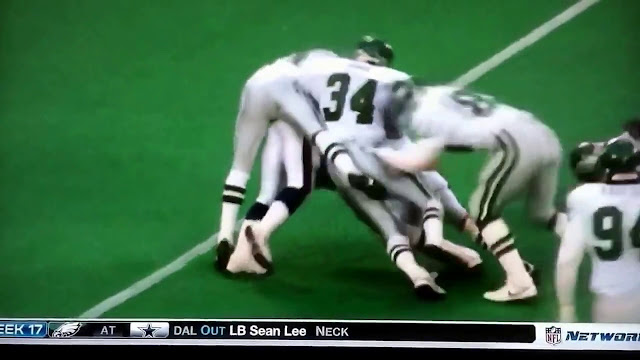 When the Cowboys kicker Dan Bailey got hurt, they had a safety Jeff Heath kick the PATs. He made 2 of 3, with his first attempt hitting the right upright. Heath was the first non-kicker since 1980 to convert on multiple PATS in a game. He hadn’t practiced in a while. 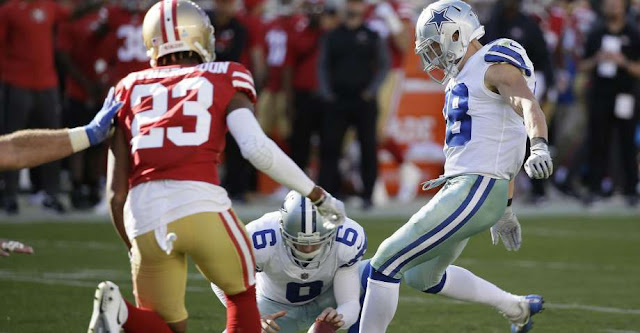