Reading a John Feinstein book about Kermit Washington’s punch of Rudy Tomjanovich. Some interesting facts so far: Kermit and Rudy were both drafted by the same GM: Pete Newell. Tomjanovich was drafted ahead of college basketball’s all-time leading scorer Pete Maravich.
Then NBA commissioner Larry McDonald had worked on Robert Kennedy’s 1968 presidential campaign. In 1972 McDonald was the head of the Democratic National Committee. It was McDonald’s office in the Watergate office building that was broken into that eventually led to Richard Nixon’s resignation.
Tomjanovich’s best friend and road roommate Calvin Murphy finished second in the nation in scoring as a college sophomore, junior, and senior – behind Maravich. In those days no NBA player got into more fights than the diminutive Murphy. Murphy was not involved in the Washington/Tomjanovich incident. Rudy was just rushing back to help break up a scrape when Kermit turned around to punch whoever was coming up behind him.
Before that 1977-1978 season NBA owners voted down a measure to increase the number of referees from two to three. On opening night Lakers center Kareem Abdul-Jabbar punched out Milwaukee Buck Kent Benson, drawing a fine of $5000.00. He would’ve been suspended had his broken hand not forced in to miss 20 games. Washington was suspended for 60 days and fined $10,000.00. After the season the owner voted to have three referees.

In his senior year in high school Washington lost his starting job. After the season he played a lot of pickup ball, then tried out for an all-star team. He was the worst player at the tryout, but his hustle gained the notice of three colleges: New Hampshire, Maryland, and American. He met with the Terps new head coach Lefty Drissell. Lefty had a scholarship to spare but said Kermit would need to improve a lot to ever see playing time as a junior or senior. American also had a new coaching staff, so he signed a full scholarship to go there.

While at American University in Washington DC, Kermit Washington’s future wife was friends with Red Auerbach’s daughter. Kermit did not know this until they gave her a ride home one night. They went inside and Kermit saw Red in pictures throughout the house. Then Red came downstairs and met Washington, whom he didn’t know before. Red found Kermit to be a polite young man. Washington would later work at Red’s basketball camp for two summers. After the punch Red made a trade to get Kermit on the Celtics. 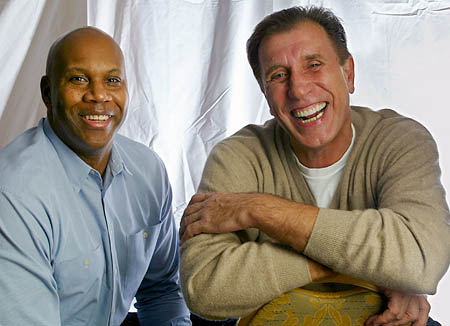 Getting three young kids ready and buckled in the car to fight traffic on Wednesday nights (and at least two other times per week) was the main reason we decided to look for a church in the suburbs. Then when the Charleston move fell through that seemed like a good time to finally cut the cord with SPdL and look for a church. Some would say we are still looking. Good Christian people at JFBC. Praying and ministering and going and serving and sacrificing. We probably need to join.

“Did all this just happen?” Again, people today don’t think things through. They believe “science” and evolution and the big bang, because that’s what they’re being taught in school. That’s their God. That’s what they put their faith in. Belief in unprovable scientific theories that require the same faith others have in Jesus Christ. They don’t question how complete chaos could turn into butterflies with “eyes” on their wings as a defense against their enemies, or fish living miles underseas with “lights” so they can see. Or bees that pollenate flowers so the flowers will bloom and produce fruit. Or that there’s a huge wooden rectangular boat way up at the top of a mountain in Turkey, and a huge layer of sediment found in all parts of the planet – indicating a worldwide flood.
Travel before the interstate highways were built must’ve been interesting.
Friday: five “bosses” are out today. Customer not working. Should be able to get stuff done.
UGA and Clemson have bye weeks. GT plays Wake at 7:30 pm. Not many other big games. Penn State vs Michigan. They still have to play Ohio State. FSU vs Louisville. Bama will kill Tennessee.
Beloved Braves coaches Terry Pendleton and Eddie Perez are out. Good guy Walt Weiss is in. Is Brian Snitker calling the shots, putting more of his guys in place? Or is this Jon Hart? Weiss and Ron Washington are former esteemed managers. Is a college of coaches being assembled? One things for sure: fans will complain.
From the Braves expert: The Coppy story was totally crazy.  If we can somehow get out of this without losing Maitan, it might not be as bad as it feels now.  I thought Coppy was good at accumulating young arms, but I was weary of his eye for major league talent.  Now that we found out that some teams and agents did not want to deal with him, I am glad he is gone.
I think they have a chance to get Dayton Moore if Hart can get moved out of the picture.  Coppy scandal aside, the Braves have a loaded farm system, and with the new ballpark, a payroll more towards the middle of MLB.  If he stays in KC, he has a long rebuild ahead.  If he comes to Atlanta and wins a World Series, like JS, he will have won a WS in 2 both leagues.
"Fans" love to complain about who is no longer here.  Had they hung onto everyone from their '13 team, McCann, Freeman, Simmons, Upton(s), Heyward and Kimbrel would all have made around $20 million each last year.  Teheran and Wood  are making less, but they would have had to fill-in the pitching behind them.  This team could have had a payroll north of $150 million and still be a .500 team.