More photos from Anna's graduation week, picking up with a few Wednesday photos. First a look inside UGA's Performing Arts Center.
We had great seats right smack dab in the middle. 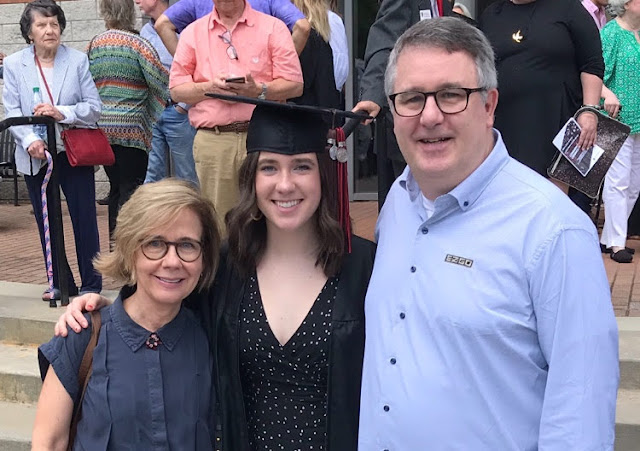 Earlier while crossing the stage,
Anna moved on after being greeting by her sneaker-wearing dean. 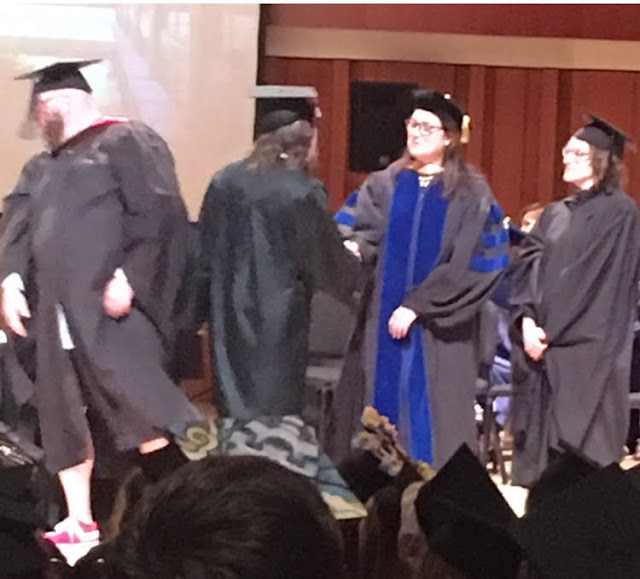 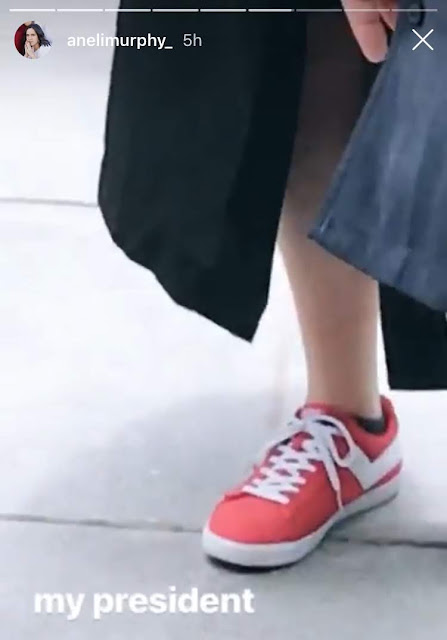 Next we walked inside the adjusting Lamar Dodd School of Art to see Anna's exit project. We returned to the art school Thursday evening with Will and Mary-Clayton for the final show. 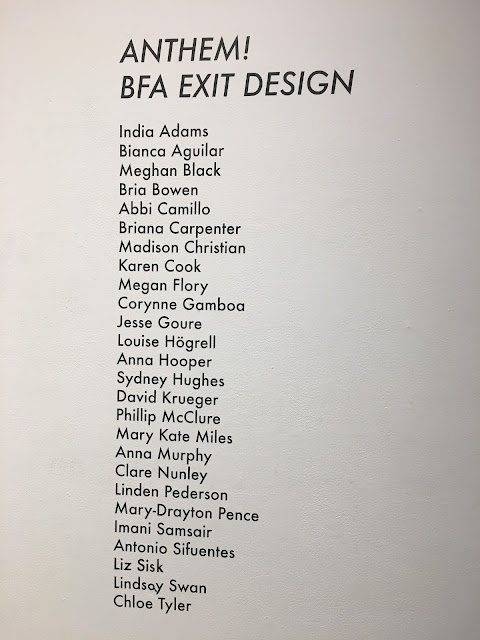 Many patrons took time to take part in Anna's project,
which involved reading and interpreting the books she bound with a partner. Below foreground: W&MC, then M and A, as C looks on. 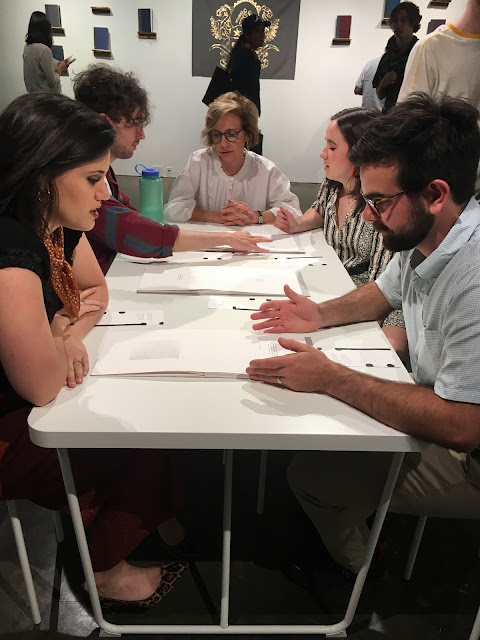 Each student created a poster representing their project.
Anna's was white with black dots and lines.
Phillip's was the flower. Meghan's was the coat of arms. 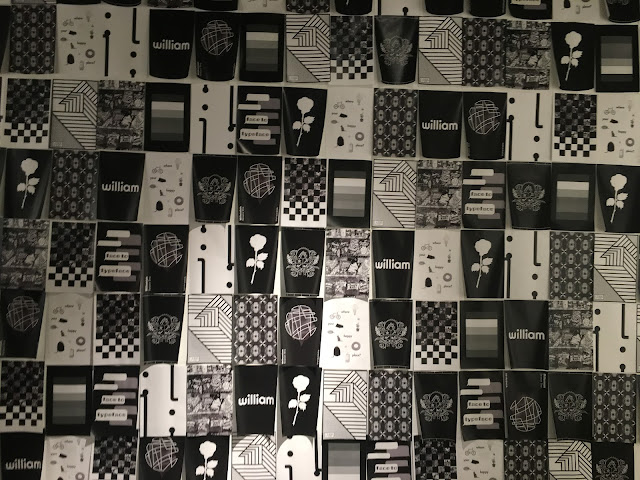 Emily's parents had booked an extra room,
which they graciously let us use Thursday night.
The hotel was brand new, across from the Holiday Inn. 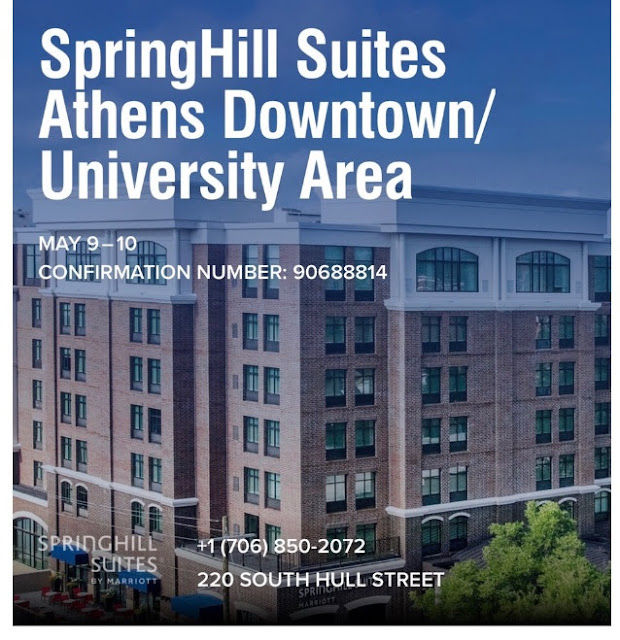 The elevator lobbies were decorated with vintage tickets. 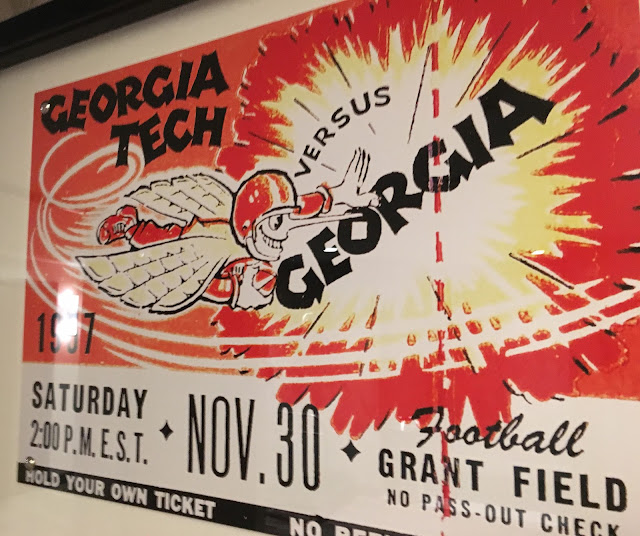 View of downtown Athens from our window.
I made sure everyone knew I had stayed in the Holiday Inn back in 1974 during the state science fair. 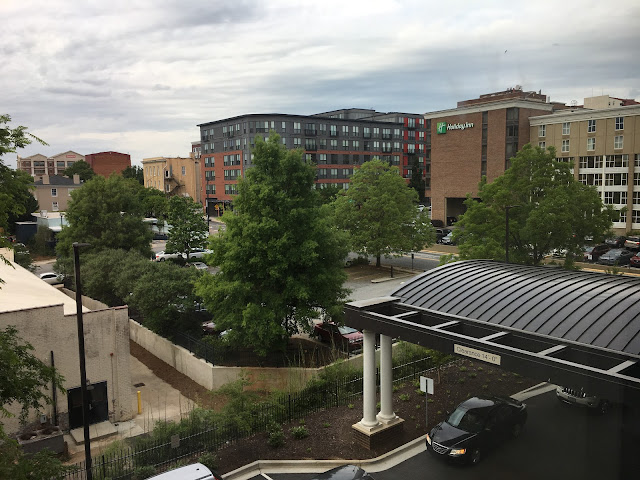 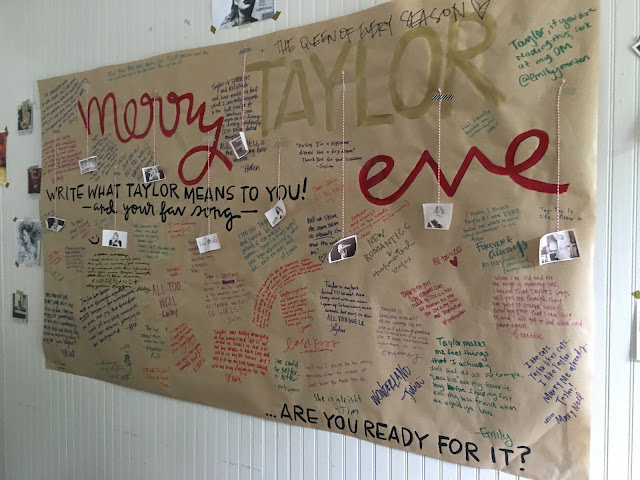 The roommates thad taken graduation pictures together, which were placed on the tables at Thursday night's graduation party. That afternoon we helped set up. We reminisced with Emily's parents - together we'd moved Emily and Anna into their freshman dorm room just four years ago. 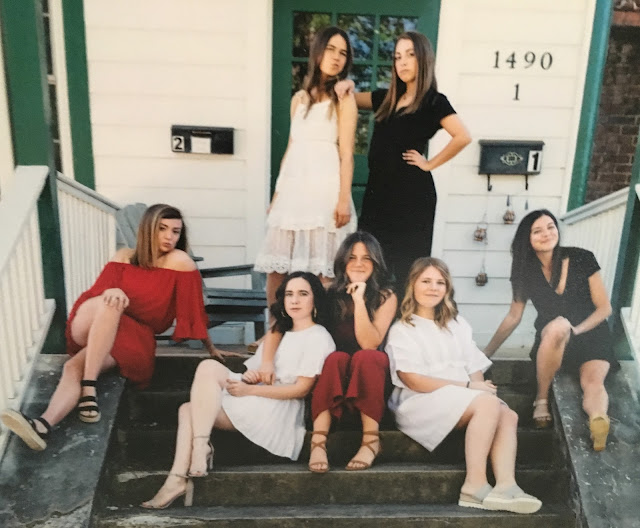 Ceil made the floral arrangements. 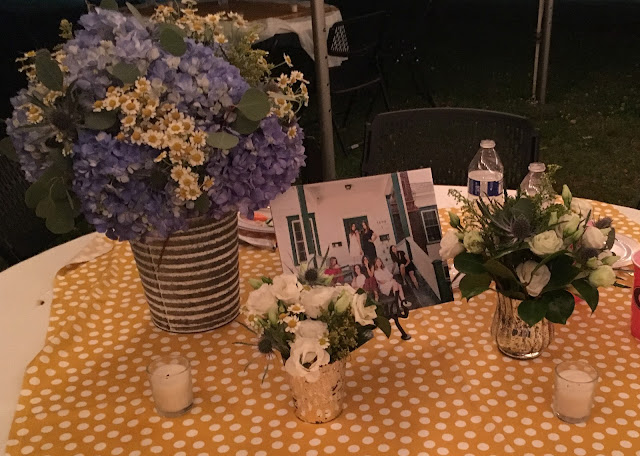 Lots of Anna's friends came out to support her final show. 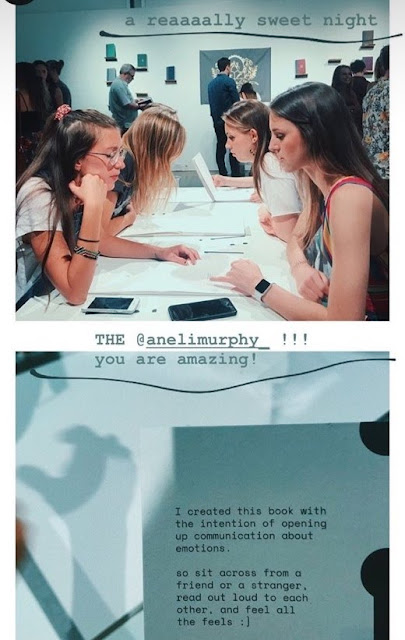 Party banner. Photo taken in the middle of the street in downtown Athens. 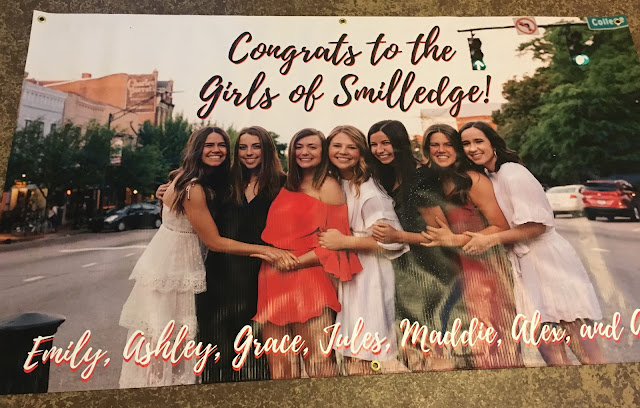 Light rain drove party-goers under tents and into the house.
Many of us older types drifted away not long after ten,
but the students carried on past midnight.
Later Anna and some of her friends went to a silent disco (below). 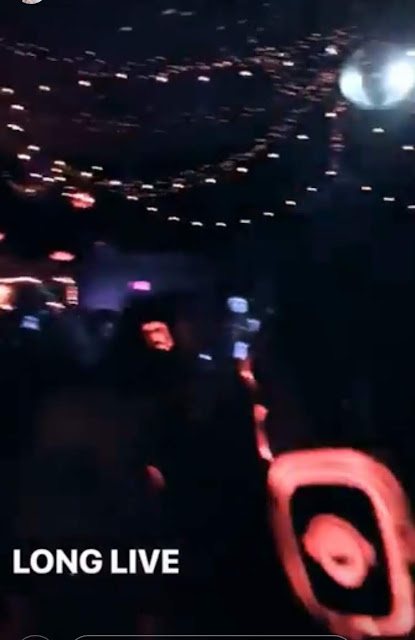 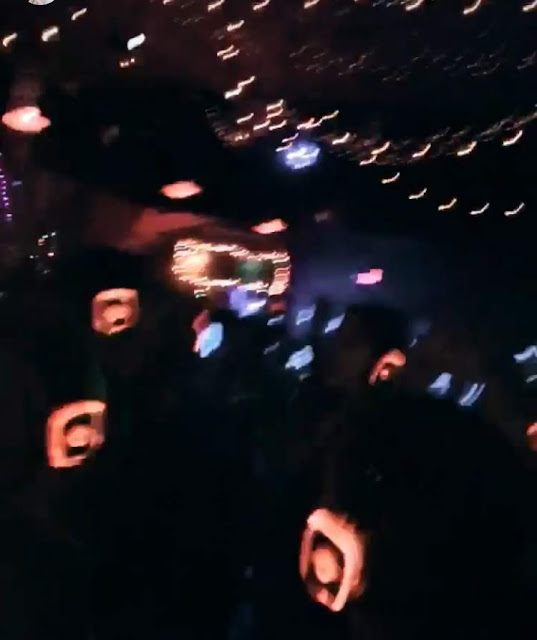 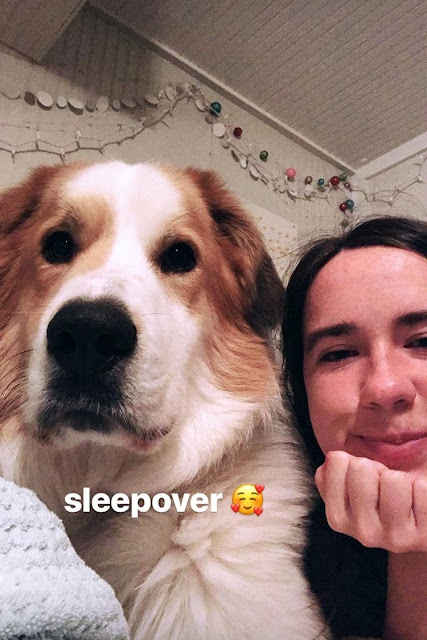 Friday morning we all met at Ideal Bagel for breakfast. 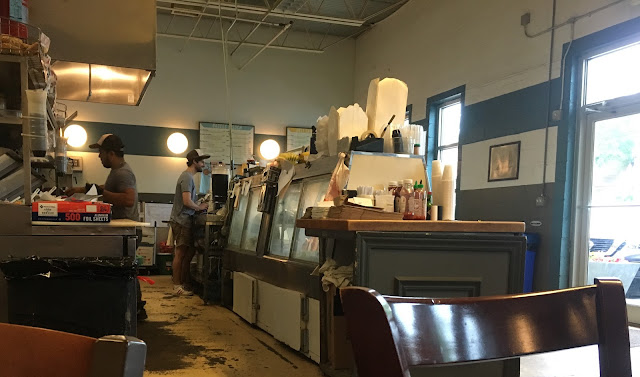 Later we went downtown, and later snacked on milkshakes and waffle fries at the new downtown Chickfila . We had a great view of graduates making poses at the famous UGA arch. 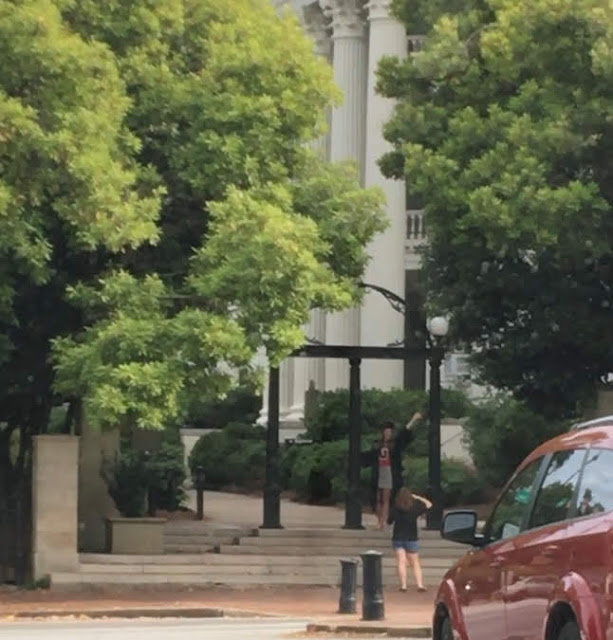 What most people don't see:
the long line of poor souls waiting in line to take pictures. 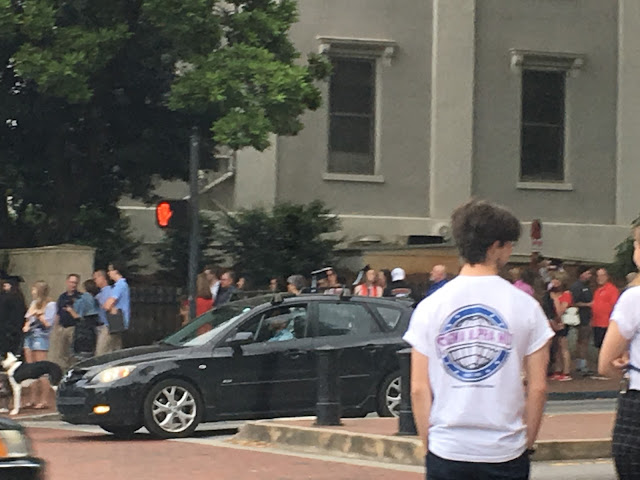 Thoughtful of Anna and the girls
to get that chore out of the way weeks ago. 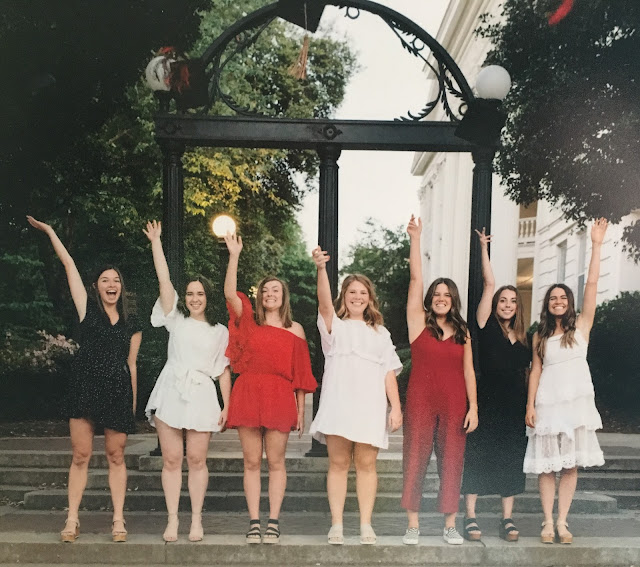 Email ThisBlogThis!Share to TwitterShare to FacebookShare to Pinterest
Labels: Anna, Mary-Clayton, Matthew, Will