More on the Weekend

Decent weekend. Friday night we tried the La Fonda on Roswell Road, at the corner of Wieuca. Food was okay but didn’t like it as much as the Howell Mill location. I had enchiladas and C had the burrito, which wasn’t smothered in sauce. Got home and accidentally left the leftovers in the car. Found them Saturday afternoon sitting out in the hot sun.
Saturday Ceil wanted to stick in the house and straighten up, his she’d had such a busy week working outside. I cleaned upstairs then did laundry and other housework. At three I left for the Gwinnett Stripers game. Ronald Acuna bobblehead. Sold two of them even before I got them. Talked to Stripers GM Adam English and saw several other friends: Johnny, LJ and his wife, Jonathan, Alan, Eric, the Vet, and the Chief. Was waiting to see Old Hugh, who was running late. Never saw him. After three hours I hit the road. Got a large Vitamin Water and ice cream at RaceTrac, then stopped by three thrift stores on the way home. Found a nice Braves golf shirt. Back home I ate Ceil’s leftovers: cooked vegetables and long grain rice.
Sunday School on the Lord’s Prayer. Later we went to Lenox Square, Ponce City Market, and Westide Provisions for Jeni’s Ice Cream. Got home and Ceil had to watch her “When Calls the Heart.” Afterwards I saw the Braves were down 3-0 so we started watching a movie. Ceil went to bed and I was playing on my laptop. Noticed on my phone the Braves had loaded the bases so I flipped it over, but the team was walking off the field celebrating the comeback win. 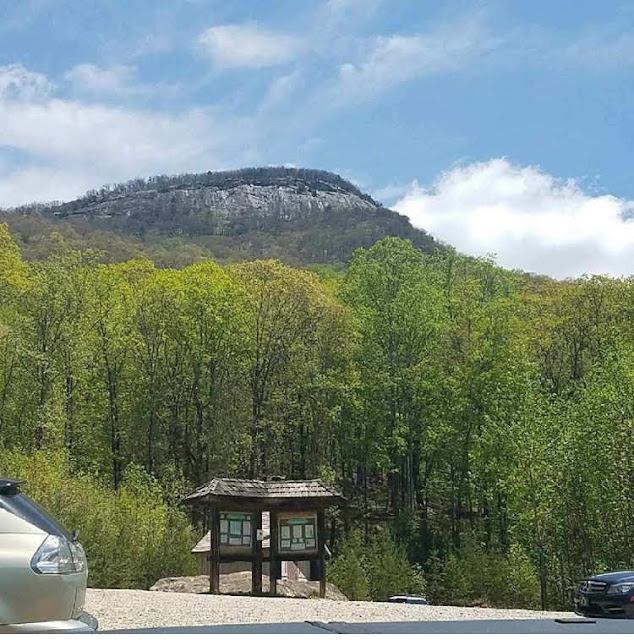 Monday we didn’t leave out until 11:30, after packing the car and fixing sandwiches and coolers. Drove up to North Georgia. Stopped at a country store, then climbed Mt. Yonah near Helen, from the trailhead above. Was rough going up, so we stopped to rest several times. Took and hour and a half. Most of the way in shade from all the trees. Cool breeze at the top. Easier coming down. A five mile hike. Thought I’d  be sore this morning but really not. Traffic home was backed up in Dawsonville, which has really grown. The GPS routed us on small, scenic back roads east of 400 across Lake Lanier to north Cumming. 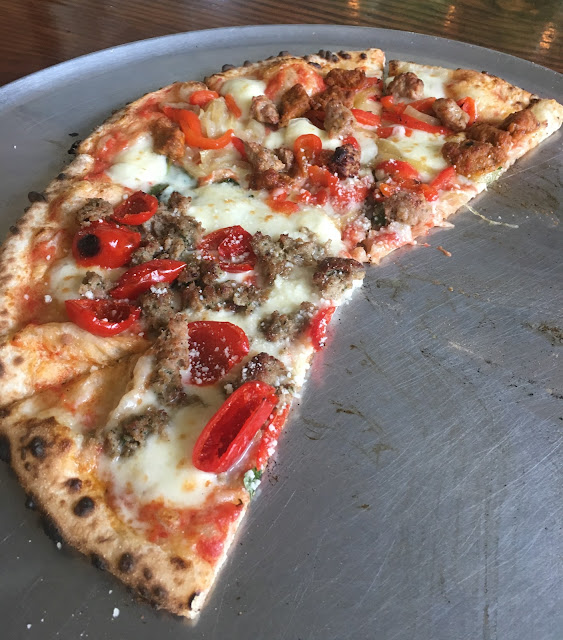 Stopped at Pizzaria Lucca on the way back. Came home and crashed on the couch. This morning I weighed less than I have in a couple of years. Probably still a little dehydrated from the hike. 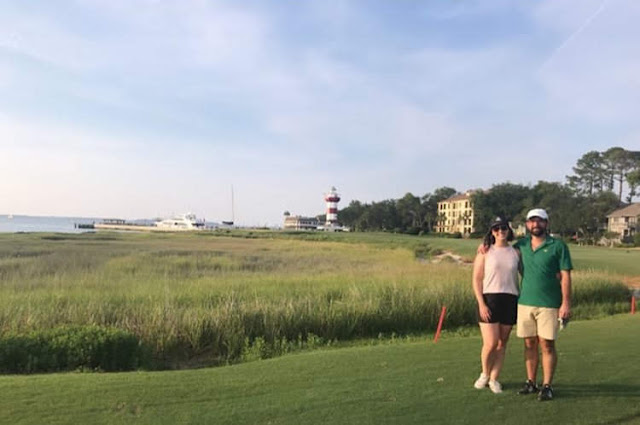 Yesterday in Hilton Head Will played the Harbour Town Golf Links,
where the PGA Tour’s Heritage Classic is played.
He shot an 87 despite making an 8 on the last hole. 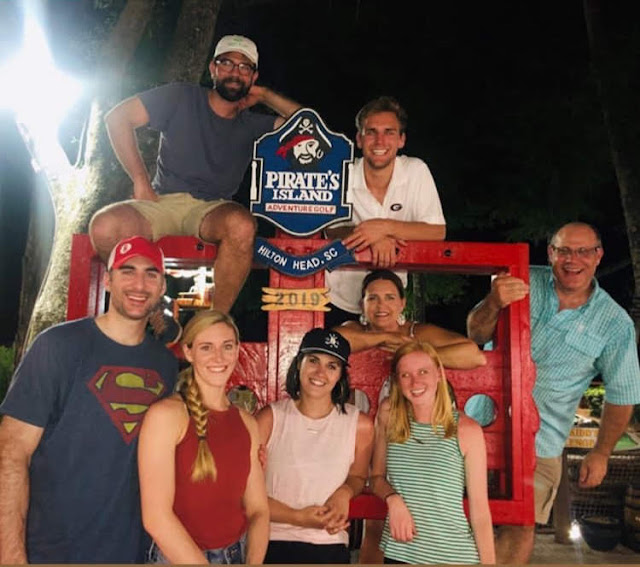 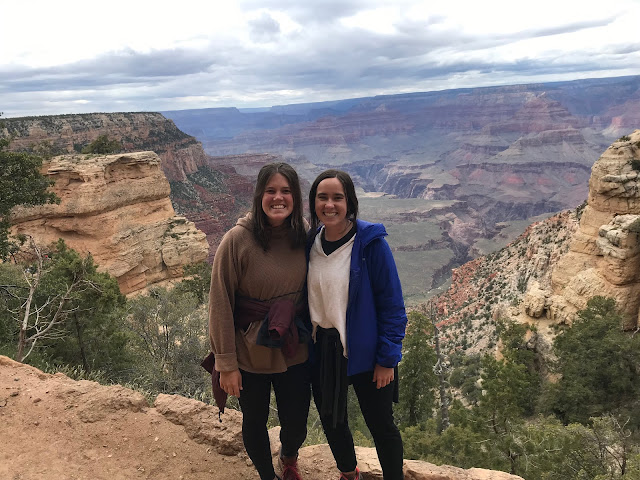 After spending a couple of days in Las Vegas,
today Anna and the girls visit the Grand Canyon. 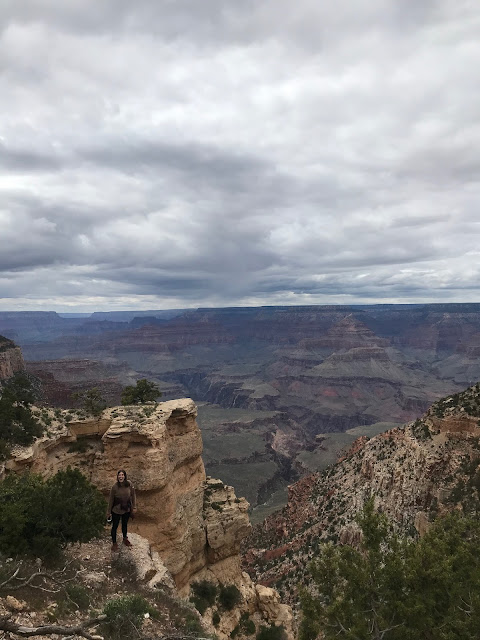 Bart Starr was like a 17th round draft choice by Green Bay. Someone in the Packers drafted him as a favor to someone at Alabama. Once at practice Lombardi chewed out Starr out on the field in front of the rest of the team. After practice Starr went into Lombardi’s office and agreed he had messed up, but asked Vince that since he was supposed to be the leader on the field for the coach to save his admonitions for closed doors. After that Lombardi never chewed out Starr in front of the team.

Back then in practice the Packers players would wear different jersey numbers, in case there were spies watching. Starr wore 51 instead of 15. Jim Taylor 13 instead of 31. Jerry Kramer 46 and Forrest Gregg 57 and Boyd Dowler 68. Didn’t seem to fool anyone.
Starr went to Sidney Lanier High in Montgomery. When he was there they played my alma mater, Sidney Lanier High in Macon. The nickname of both teams was the Poets. You never see good names like that any more. Lake Lanier was also named for the poet, but a few years ago a new high school in Hall Country was dubbed Lanier High. Their team name? The Longhorns.
Up Ga 400 at the McFarland Road exit the new high school was named after the area’s famous resident, Dr Lelia Denmark, who practiced well past the age of one hundred. They could’ve named the team the Denmark High Doctors, or Fighting Pediatricians. Instead they named them the Great Danes, or Denmark Danes for short. At least that was semi-original. Better than Longhorns.
More Packers: interesting that in the early to mid-1960’s the Packer kicking duties were shared by RB Paul Hornung, guard Jerry Kramer, and punter/kicker Don Chandler. Many teams had yet to hire a player to just kick. The Browns had guard Lou Groza, who finally retired as a guard but later came back just to kick. The Bears had QB George Blanda, who also played some linebacker. The Patriots had WR/DB/QB/K Gino Cappelletti. The Falcons first kicker was #55, guard Lou Kirouac (below). 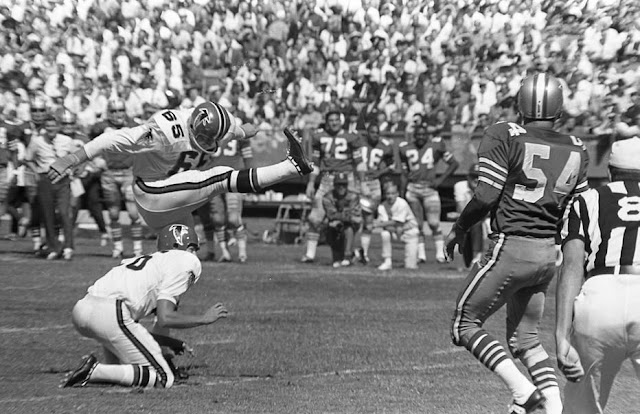 Falcons punter Billy Lothridge (holding above) was a QB/K at Tech, then played some defensive back for the Falcons. When Bear Brian Piccolo was weakened by cancer, he hoped to come back as a kicker.
https://en.wikipedia.org/wiki/Don_Chandler 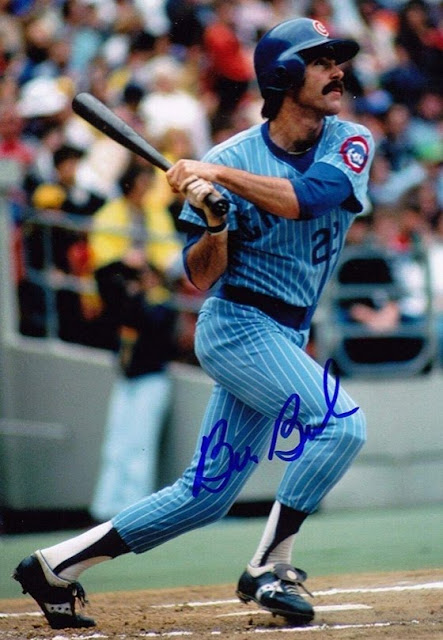 BILL BUCKNER  [SABR Bio] passed away yesterday. Here are some fun facts about his career: playing left field, he climbed the fence in an attempt to catch Hank Aaron's 715th career home run - he nearly scaled the fence in his effort. 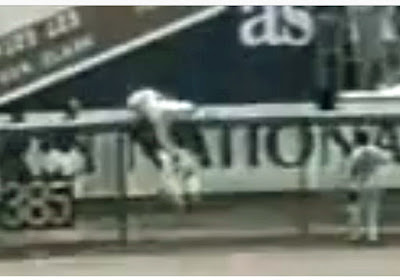 Was drafted by the Dodgers behind his friend Bobby Valentine, who the Dodgers took first - Buckner went in the 2nd round of the 1968 Draft. Valentine went in the 1st, just behind Thurman Munson. Buckner was displaced at first base by Steve Garvey, who took over 1st base for LAD in 1973. He won the NL MVP in 1974. Buckner also got an MVP vote that year. Buckner was the first professional baseball player to wear Nike high-top cleats - first wore the high-tops in 1986. Yes, he was wearing them that night. Was once traded for Dennis Eckersley - 25-May-1984: Traded by CHC to BOS for Mike Brumley and Dennis Eckersley. His record for assists by a first baseman in a season lasted well into this century - his record of 184 assist by a 1st baseman in 1985 w/BOS was broken when Albert Pujols had 185 in 2009 with STL. His 174th and final career home run was, ironically, his only inside-the-park home run - ITPHR off Kirk McCaskill 25-Apr-1990, made possible when Claudell Washington fell into the stands after trying to catch Buckner's drive. That was the 1st HR McCaskill gave up that season. The antepenultimate and penultimate HRs he surrendered that year were to father & son Griffey. Buckner is one of only five players to appear in major league games in the 1960s, 70s, 80s and 90s - 60s-90s players also include Rick Dempsey, Carlton Fisk, Jerry Reuss and Nolan Ryan. As of today, Buckner ranks 66th in career hits and 65th in career doubles - his 2,715 H rank just behind Rusty Staub & Lou Gehrig. He is also just behind Staub w/498 career doubles. Was responsible for developing the Fenway Park subdivision in Boise - Fenway Park subdivision in Boise.