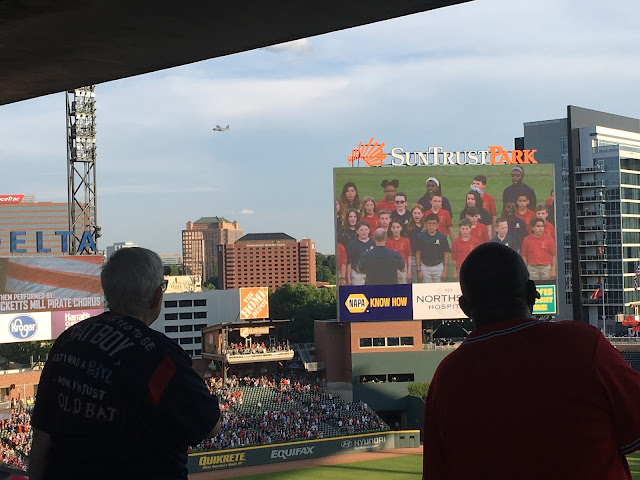 Notes from Thursday's game. I left work just before three. Traffic wasn’t too bad. Made my usual walk uphill to the park. Saw a couple of regulars. The young guy liked my new Curious George backpack. Hung out with several early birds in the front of the line at the Club House Gate: a retired graduate of Lucy Laney High in Augusta back in the 60’s, and a couple from Soddy Daisy Tennessee. 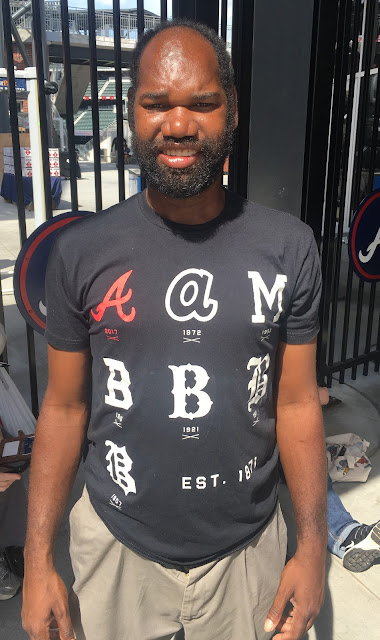 Gates opened and I visited with several of the regulars: Darrell (below), the Chocolate Papa, Miss Marion, the Coach, Kevin from Birmingham, Mike the Duke fan, Sandy the retired Designated Driver lady. Met up with coworker Ben and several former coworkers: Chris, Blake, Justin, and Aaron. Later I saw the Deborah Light Painter was at the game. 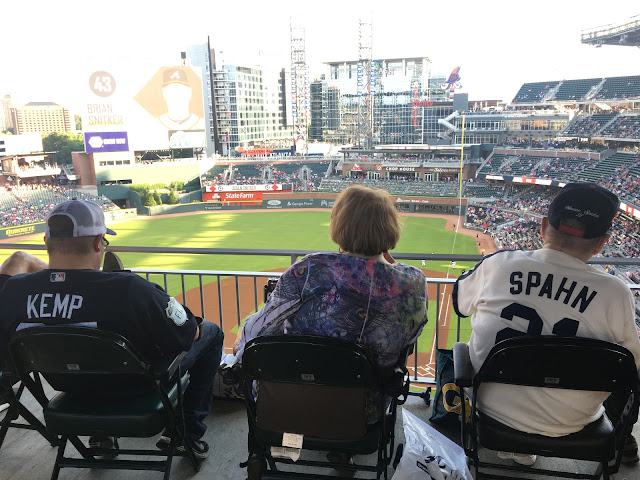 Took the escalator to the top deck. Was walking behind the press box with the setting sun in my eyes. Saw someone checking out my new 1976 red pinstriped Braves CHANNEL 17 jersey. It was the legendary usher Walter Banks, slumming in the upper deck taking VIPs on a tour. Walter said he liked the jersey. When he saw the back of it he correctly named the player: Andy Messersmith. Later a 78 year old usher came over to compliment me on it. The guy had used to work at the downtown Rich’s. 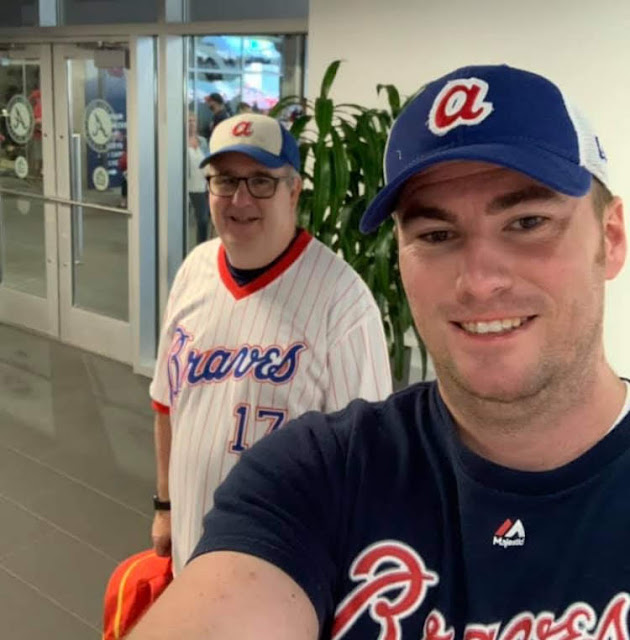 During the national anthem a local C-130 Hercules circled counterclockwise beyond the outfield buildings (top).
Ben, Blake (above), and I watched the first few innings from a perch next to the press box. We could see Chris, Justin (red t-shirt, middle), and Aaron wining and dining in their primo seats (below). 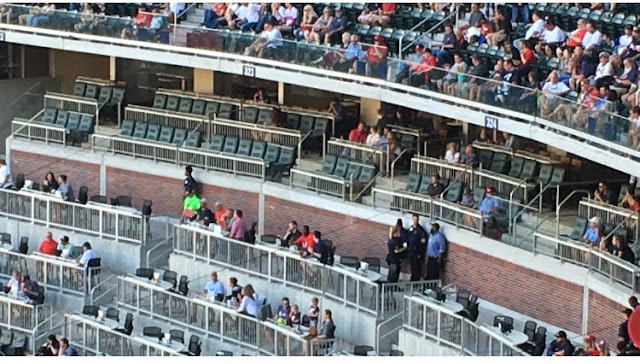 Later Chris came up to hang out, then I went down to the primo seats. They had $120.00 of concession money do they bought me a hot dog, fries, and large Coke Zero. I was famished so it tasted great. Aaron had caught a foul ball. 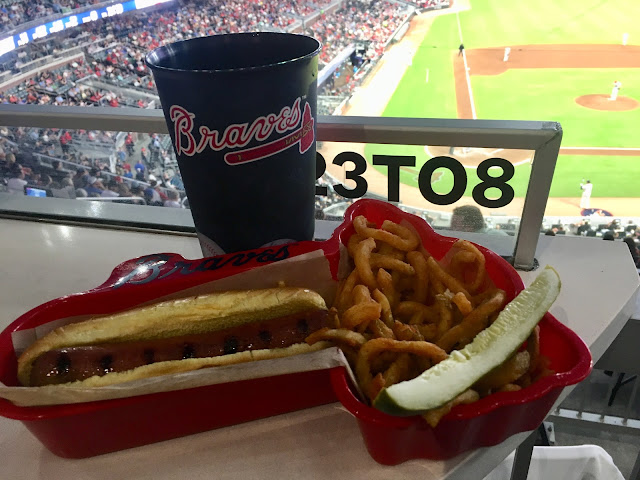 Good game. Riley just missed a home run. Had two doubles and a single, and made two hustle players in left field. The offense poured it on and after a slightly shaky start Teheran took a no-hitter into the fifth inning. At 9:30 Justin made his exit, and later Aaron. Chris and I went down to sit with Ben and Blake in the right field corner. We made our leave after 10 pm. Walked across the bridge with Chris and Ben, then on back to my car. 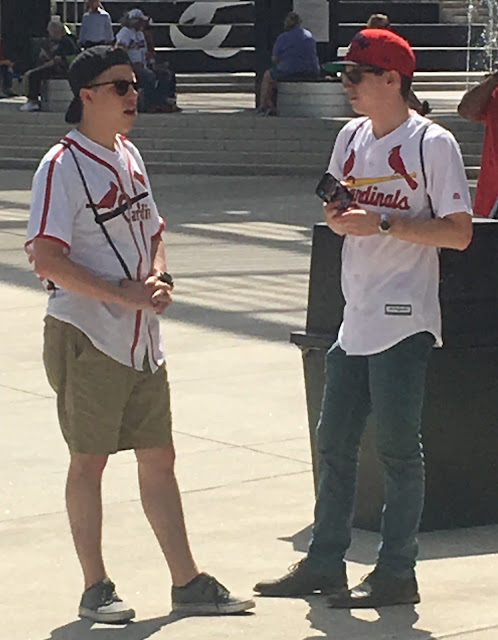 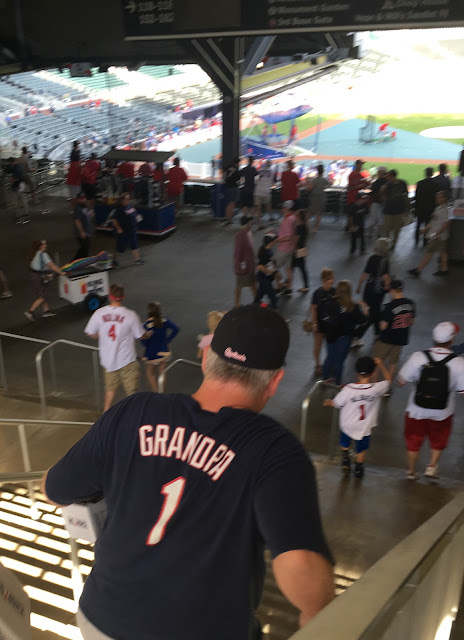 Was after eleven when I got home. Worked on a blog post. Had on the Braves replay, and also saw the Big Bang Theory cast on Steven Colbert. Went to bed at 12:55 am.

Rodney brought donuts and apple fritters this am. Lunch meeting catered by Mellow Mushroom after a 10 am vendor meeting. 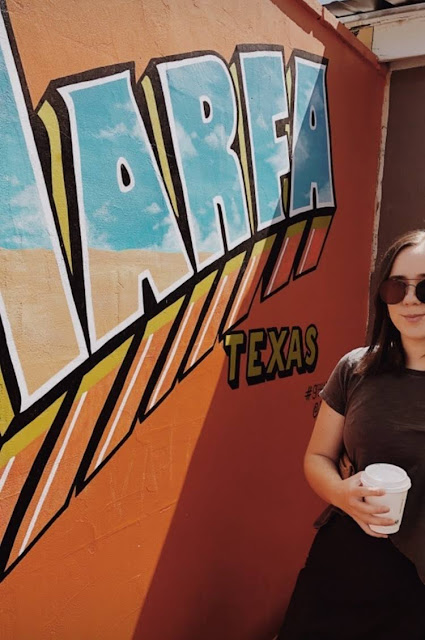 Anna and the girls spent the night in a small town in West Texas. 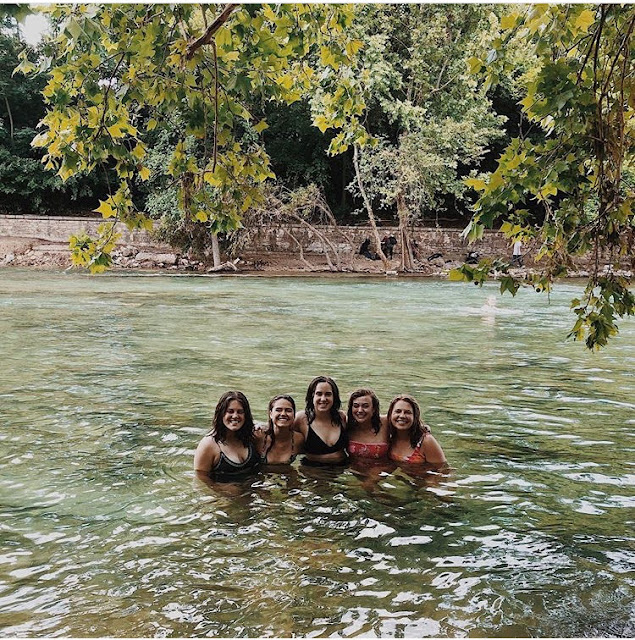 Went swimming in a river. More on that on Sunday. 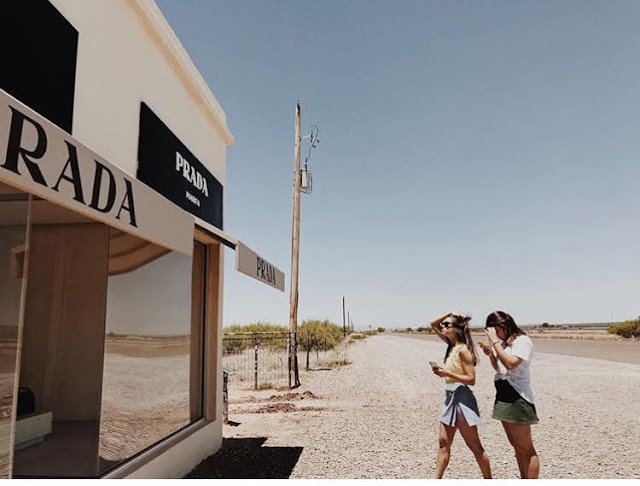